So, at work there come great ideas sometimes… sometimes not for actual work whatsoever. lol

Reading an article in a work-related newspaper about major airports adapting themselves to accomodate (U)LCC in the future, sometimes even with newly-built and dedicated terminals I wondered: Is there something planned like an Airport Planning Tool?
(couldn’t find a thing but maybe just used the wrong search words)

For example you have your airport up and running nicely. You were able to attract airlines who use your airport as a destination point (sth like any charter-only-served airport comes to mind). Now you had some inquiries by airlines of the category of Ryanair and as well of a major hub airline like Lufthansa but your airport is not ready for their operations. Now what? Build a terminal hoping for the best? Of course not. You’d plan a construction on a blueprint, right?

) with its Blueprint Layover feature handy!
You get all features you get to build an actual working structure in A.CEO but they cost nothing and can be build onto the existing structure (hence a blueprint layover). Then you are able to see how big will it be? Do you have to remove something or is there a better way in doing what you plan to do? And of course you’d get an estimated costs & time schedule aswell showing you what you have to expect if you build your structure!
And to round that off: It can be proposed in your official airport offer like “Hey! We’ll build that thing, sign here!”. If you proceed accordingly you have a new group of airline in your house… if you fail to deliver you get send to hell

If this hasn’t been brought up yet… just in case… as said I couldn’t find it.

I think I haven’t seen something like this before. Sounds great especially the cost calculation (which I thought I would add but you had already thought of it

I very much like this idea. Though in terms of game play it potentially removes some of the risk/reward feeling you get when a thing is successful.

I like what Prison Architect did, you can plan out the rooms how you want them to be shaped, but you’re not quite sure if it’ll have the effect you want. That was when your cool design pays off you get a proper sense of achievement rather than just ‘Oh hey, the estimation tool was correct’.

That being said… If you had to manually enter things like number of passengers to use it, what the expected time in the shops is going to be and the blueprint tool acted like a simple calculator for your own estimates of usage and numbers then it could be quite interesting because it doesn’t remove the challenge from the game.

I also like the Prison Architect version of this. I like drawing a pilot plan, where I plan how to use all the available terrain in the most efficient way, making the expansions more neat.

Honestly, Prison Architect was my thought on this!! I like the idea, BUT I feel like it’s something that should be earned as you progress. That way, there’s a little bit of a challenge before you even get the planning tool!

It could be like something you get with a dedicated “Facility Manager” (not a janitor lol)? Basically a step under COO…

Also, I have a very big problem with the Prison Architect approach in a game like A.CEO because A.CEO is more of a simulation (as we see in those financial reports from some DevLogs ago) which would ruin the overall consistency of the gameplay if it would be implemented in this very low-tech form. Can’t like that thought.
Especially since you earn a lot more compared to spendings than I’d expect in A.CEO?

As you said the calculations should not be too advanced and I would add maybe not completely accurate. However if you going to build a new terminal it could be nice to know how much it would cost so you don’t run out of money halfway through.

The basic blueprinting should be available directly, or after hiring a project manager. The calculations could bean upgrade after training

Sounds good, that way you can start outlining almost right away, while having tp spend money and time to get the added benefot.
Now i only a dev could confirm they like this

Interesting ideas, great reading and great suggestions. We like this and I know a good place for it, honestly, the contract on the construction panel was put there “temporarily” as we didn’t have any ideas for what to put in its place. The APT could be placed there!

I like what Prison Architect did, you can plan out the rooms how you want them to be shaped, but you’re not quite sure if it’ll have the effect you want. That was when your cool design pays off you get a proper sense of achievement rather than just ‘Oh hey, the estimation tool was correct’.

Yes, I agree, this is very important. You’ve seen in previous devlogs that we do have an overlay system for displaying object that haven’t been built, this has been somewhat enhanced and now we use an overlay with a mixture of the original sprite that, at least in my opinion, allows you to get somewhat of an idea as to how its going to look once its built but still with the sensation that “I’ve built something”. Mostly all of the excitement in building something is the anticipation of how your idea of how something looks, actually comes out.

Honestly, Prison Architect was my thought on this!! I like the idea, BUT I feel like it’s something that should be earned as you progress. That way, there’s a little bit of a challenge before you even get the planning tool!

The basic blueprinting should be available directly, or after hiring a project manager. The calculations could bean upgrade after training

Good ideas. Expanding and upgrading are important drivers of tycoon games and I think this is a good example on how it can be used.

The only “challenge” I can see is the per-build cost calculation. In order to keep complexity and annoyance down there’s not a separate contract for each build (this simply wouldn’t work as a player might construct additional buildings when the construction crew is over there) but we could definitely give an estimate cost on construction of the remaining objects as well as the per-deployment total construction cost.

Is there anything to this topic or tool being added to the in the upcoming months?

I would find it really useful. or at least a layout before the construction crew builds out everything.

You could “plan” by not deploying any construction workers. Just send all away, and “build” what you want. When you are done and happy with the layout and content of the buildings, just deploy the workers and they will build

Having a blue box look layer on the ground doesn’t help much on the ground. cause you can’t see much. At least if you have a blue print or a planning tool u can plan everything out than leave it there and unpause and continue playing. if you plan it you have to allow it to build or delete than u end up using that space for something else.

That is true and I agree a planning-tool would be nice. My suggestion was a way “around” it until a tool is in place

How do you increase the flight planner to open up more gates if you have more than 3 gates built ? it only allows me to set up 3 gates even though i have 3+gates built

How do you increase the flight planner to open up more gates if you have more than 3 gates built ? it only allows me to set up 3 gates even though i have 3+gates built

Have you opened the stands? (Maybe a stupid question…) I do not have the same problem as you have. I have 4 medium stands and can plan flights on all of them.

When you klick on the stand, in the window that pops up you can open the stand. 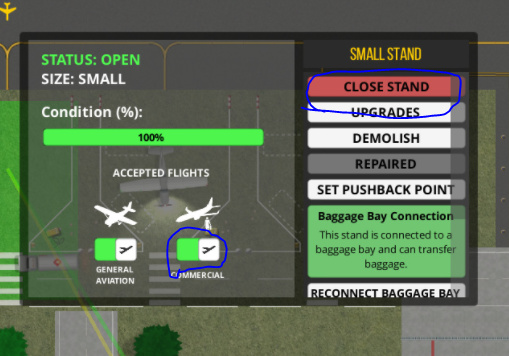 There I have marked two things you need to make it come available for flights in the planner. First select commercial flights and then press the top button so that it opens the stand.