I recently picked up Airport CEO after having it sit on the top of my Steam wish-list for some time. I fell in love with immediately and spent my whole weekend perfecting my airports. Right now I would give it a 5 out 5, but I have quickly developed an amount recommendations.

A quick background on myself though before I get into it. I work at an airport myself, like many (I assume) I am a line service technician at a FBO just outside a major US city and working on my pilots license. I don’t consider myself an aviation expert but having worked on planes every day for the last three years I’ve learned a thing or two and through this I’ve developed some input for Airport CEO. I’m sure some of this may have been recommended and if it has let me echo it as am excellent idea!

While playing Airport CEO it’s clear to see the focus is in Commercial Aviation. But at most airports support General Aviation by means of an FBO (Fixed Based Operator), this may be old new for some but it is a little known operation outside the aviation community. If you had the guts to slip your Cessna 172 into Hartsfield-Jackson Atlanta there is more than just a place to park waiting for you at the FBO. FBO’s have everything needed to support GA aircraft and some (like mine) offer basic services for airlines as well. Most FBO’s however are mainly looking to receive private jet traffic which based on the people who fly on these aircraft are both demanding and lucrative. With a very general idea of an FBO’s function in mind here are my ideas on how they can be implemented in Airport CEO!

The FBO itself is a building separate from the main terminal that is open exclusively to private passengers. Because of this there is no security screening or baggage handling, passengers are able to walk directly to their aircraft after checking in with the FBO desk.

The in game solution I assume would be to create an “FBO Zone” which would restrict an area to only FBO customers. To designate any part of an operation is to link an “FBO Desk” to a stand and allow an additional setting for “Private” on the stand to designate it for GA aircraft marking private flights which I will go into below. The FBO Desk like the boarding desk will only be placeable in an FBO Zone. The desk itself will act as both a check in and boarding desk for inbound passengers. Since passengers proceed directly to their aircraft the will keep their baggage with them so there will be no need for a baggage handling service in game. 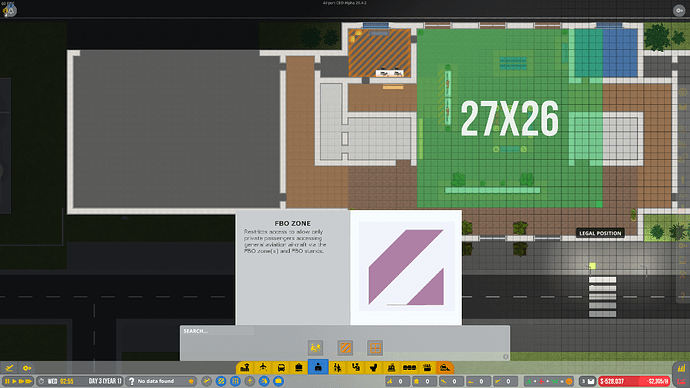 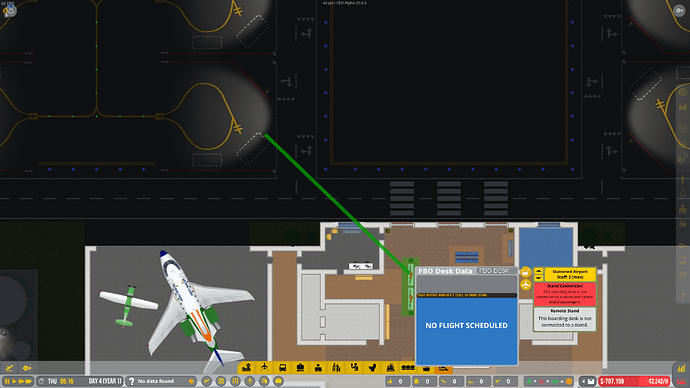 Private flights are flights typically conducted to either “further a business” or for thr leisure of the rich and famous. Regardless of the the passengers objective these flights are all considered to apart of “General Aviation”, you may not think of a private jet as a GA plane but it isn’t the size it’s the mission that makes the classification. Because of this there is not everyone who is flying “private” is necessarily in a private jet. While private jets do make up a majority of these flights it isn’t uncommon to see a single executive dropped off by high-end piston aircraft.

Within AirportCEO the “Private” flight category would allow private aircraft to land use the FBO facilities. They can consume JetA or AvGas according to their aircraft type, take on catering meals for passengers and crew, and receive other sorts of services (de-icing, maintenance, etc) much like a commercial jet. And like the commercial aircraft in game they are transporting passengers, just not as many, but unlike commercial aircraft they travel at the command of their passengers. A private flight may drop it’s passengers and leave, only to return to pick them up days later, where as some may drop off their passengers and wait overnight or maybe several nights to fly them home again. These planes would be occupying your stands or hangers for an extended period, but will of course be charged fees for the amount of time spent in that space. Also because of the nature of these flights there is no scheduling them, they are just as random as other GA flights, some days there may be dozens, and others none. There isn’t much method to the private flight world. 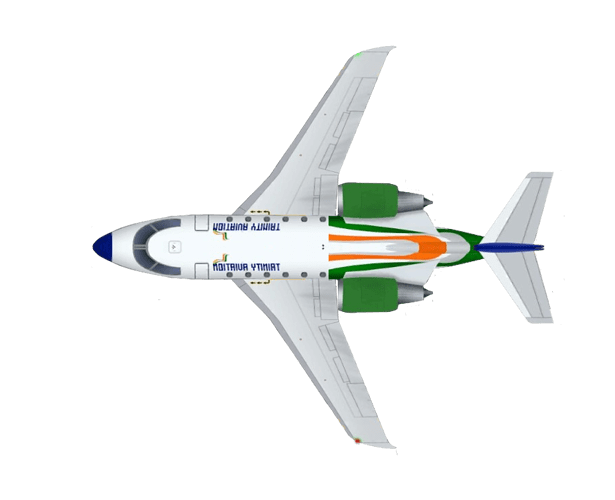 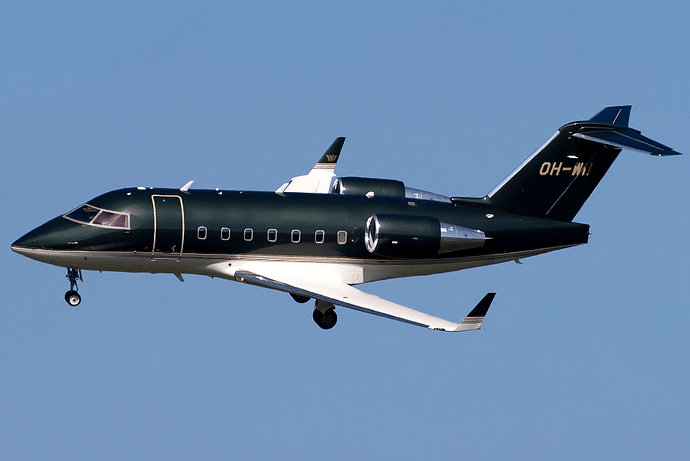 Hangers at an FBO are populated by many types of tenants. For the most part there are what we call “Base Aircraft” which are private aircraft that operate out of our FBO hanger year round, in short this is that aircraft’s “base”. On top of that there is transient aircraft which sometimes request to stay in a hanger over night as opposed to being left exposed on the ramp. Transient flights requesting hanger space increases and decreases with the season, during winter snow or months with high wind or heavy rainfall aircraft typically are more likely to request a hanger than stay out. Hanger space is almost never free and the bigger the aircraft the bigger fee is for its stay.

To accomplish this in game I believe the easiest solution would be to have a stand type that is only placeable indoors akin to how the baggage sorting is handled. These stands would then be able to work on two settings: “Contract” which would be an aircraft that is looking to be a base customer and operate out of that hanger for an extended period of time, and “Transient” which would be a stand only accepting overnight aircraft.

In game this would be a extra-small stand that could only accept GA flights, but allow the construction of more tie down stands due to it’s small form factor. 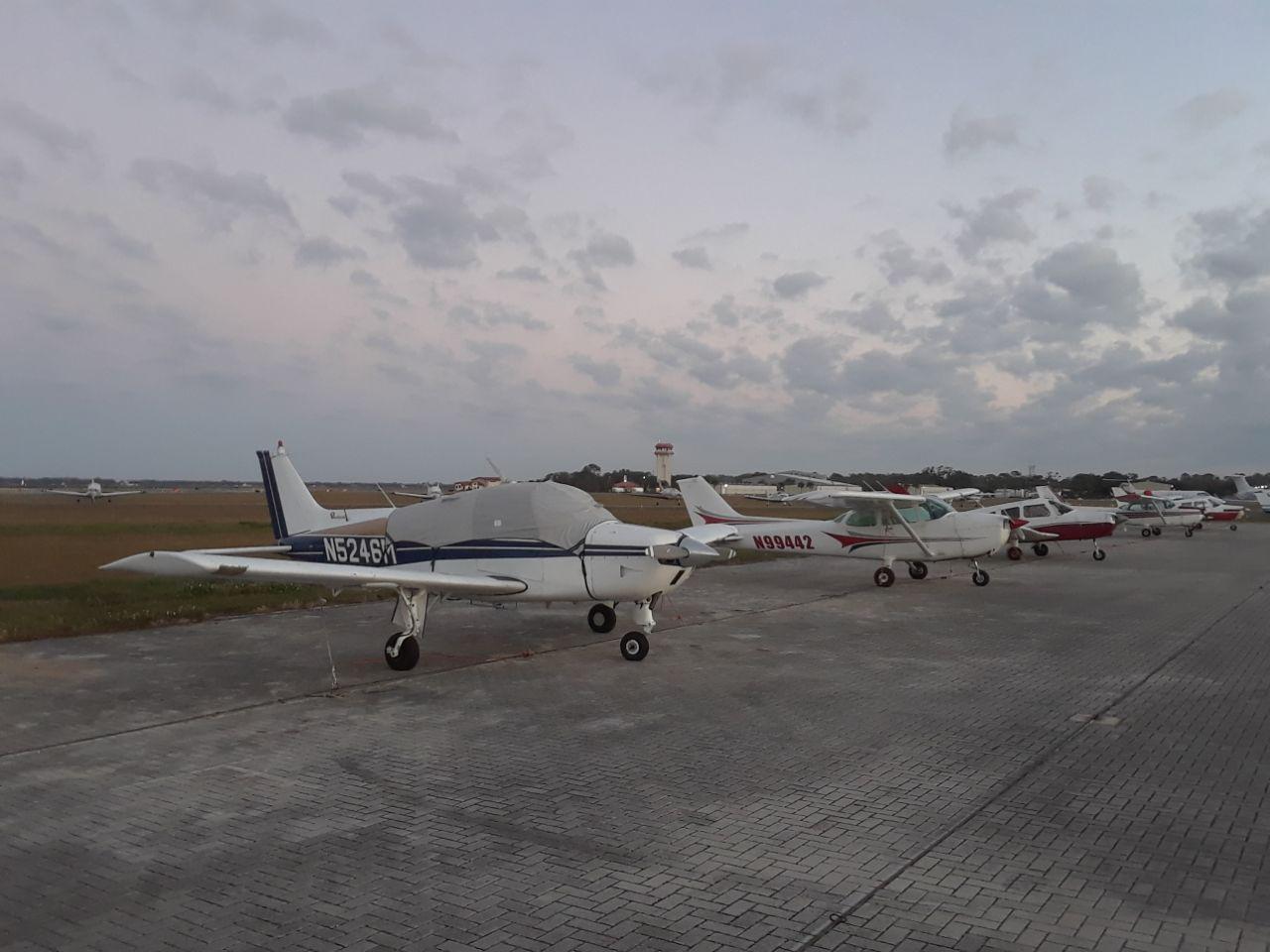 Helicopters are a rarity outside of General Aviation seeing very little use in the typical Commercial Aviation world. While helicopters are not incredibly common in the GA world either they still make up a percentage of private air travel, though depending on your location (such as near a major city like New York) there is an increased amount of helicopter traffic. Though in addition to passenger transport helicopters see specialized use for industrial use such as the Sikorsky S-64 Skycrane for heavy-lift use or the MD Helicopters MD-500 which is frequently used for power line maintenance throughout the world. They all would make great use of my FBO concept and add some flavor to type of aircraft your airport receives.

For Airport CEO use I see helicopters using the base “GA Flights” and my before mentioned “Private Flights” to make best use of them. GA Flight helicopters consisting of piston engine aircraft (the AvGas ones) such as the Robinson R22 or R44 which are popular privately owned/personal helicopters and are small enough to fit on a normal GA stand or tie down. For the Private Flight side turbine helicopters like the AgustaWestland AW109 or the Bell 206/407 are common in the private sector. If there are any concerns about their animation helicopters typically follow planes in their operation around airports. While they do not fly in traffic patterns they do typically land on runways and taxi (or hover taxi for those without wheels) on taxiways so at the end of the day they are a plane with a prop on top as far as animation and pathing goes. That said I’m no game designer so I’m not sure how easy that would actually be! 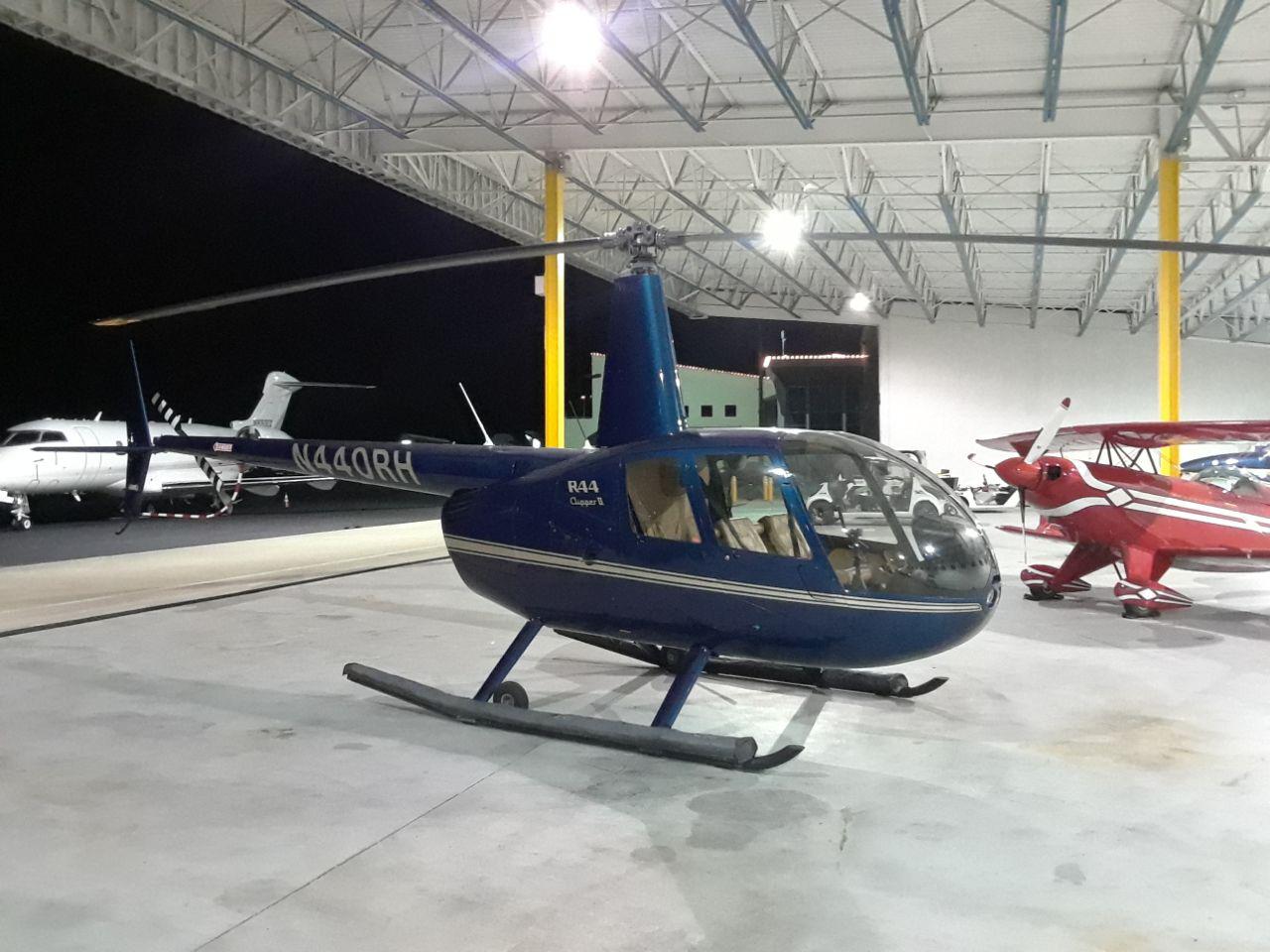 And although I am no developer, your ideas seem to be already more-or-less available in the current code of the game, or at least in its logic.

So the whole idea should be rather simple to adopt!

There is only one thing I would like to add @Flak. For international (i.e. non-domestic, non-Schengen) private flights, I guess you still require security screening and passport screening/customs. The latter is not yet part of the game, but should be taken into consideration.

I really like the idea of selling hanger space and services. The sale of hangers for airline maintenance or smaller private owner storage would be quite fun. Given the profitability of the retail locations, why not become property owners/renters or ground real estate as well as airport real-estate. Airlines can/should be able to rent aircraft stands for parking the exact same as this bottom image above. How often do we see this occur at hubs.

I also think there should be some level of increasing depth of airline relationship with the use of rentable aircraft maintenance facility. Why is my relationship with the airline a percentage form and why does that only allow me to have more flights scheduled. Airport relationship should generate options for private rest areas, levels of aircraft maintenance, excess plane parking, etc. Lots of things could be built on top of the coding used for FMO implementation that can then extend to other features. At some point, it seems this sort of feature would also require increasing the overall size of the map, which I think has to happen anyway for large/extra large aircraft.

There is two way this is handled in the real world, or almost two ways. If you are flying to the country and your end destination does not have a customs office on the airfield you will need to fly to one that does. At my airport we have a customs office with it’s own ramp (or stand in AirportCEO terms) and aircraft will taxi to them for their customs check. At the international commercial airport here they have a customs gate which can revive private aircraft of any size. Typically a customs officer will check the plane, luggage, and then passengers in their customs area. After this they’re free to taxi to the FBO. This could be an option by having a customs stand, area, and desk then allowing international private flights, or alternatively you can always just not have one.

@Flak thanks for the explanation. The dev’s can simply pick your brain and implement the FBO feature

When I first saw the title of this post, I thought no, don’t like the idea of FBOs in Airport CEO. While I personally have nothing against them, maybe my background in commercial aviation is making me a bit biased here.

However, I thought, let’s read the post and see what it says. I eventually did, and am quite impressed by the planning, through process and detail that went into this post. @Flak, would use your real-life FBO any day if I had a need for one.

Am glad to say that this post has changed my mind, and if implemented as per this post, am definitely keen on the idea and seeing it in Airport CEO. Additionally, would also like to be able to have dedicated taxiways between the FBO and runway, so that FBO traffic doesn’t interfere with the commercial traffic at my airport. I have seen a number of airports with this feature. I know this could also be achieved with intelligent placement of the FBO and terminals, but dedicated taxiways would also be nice. 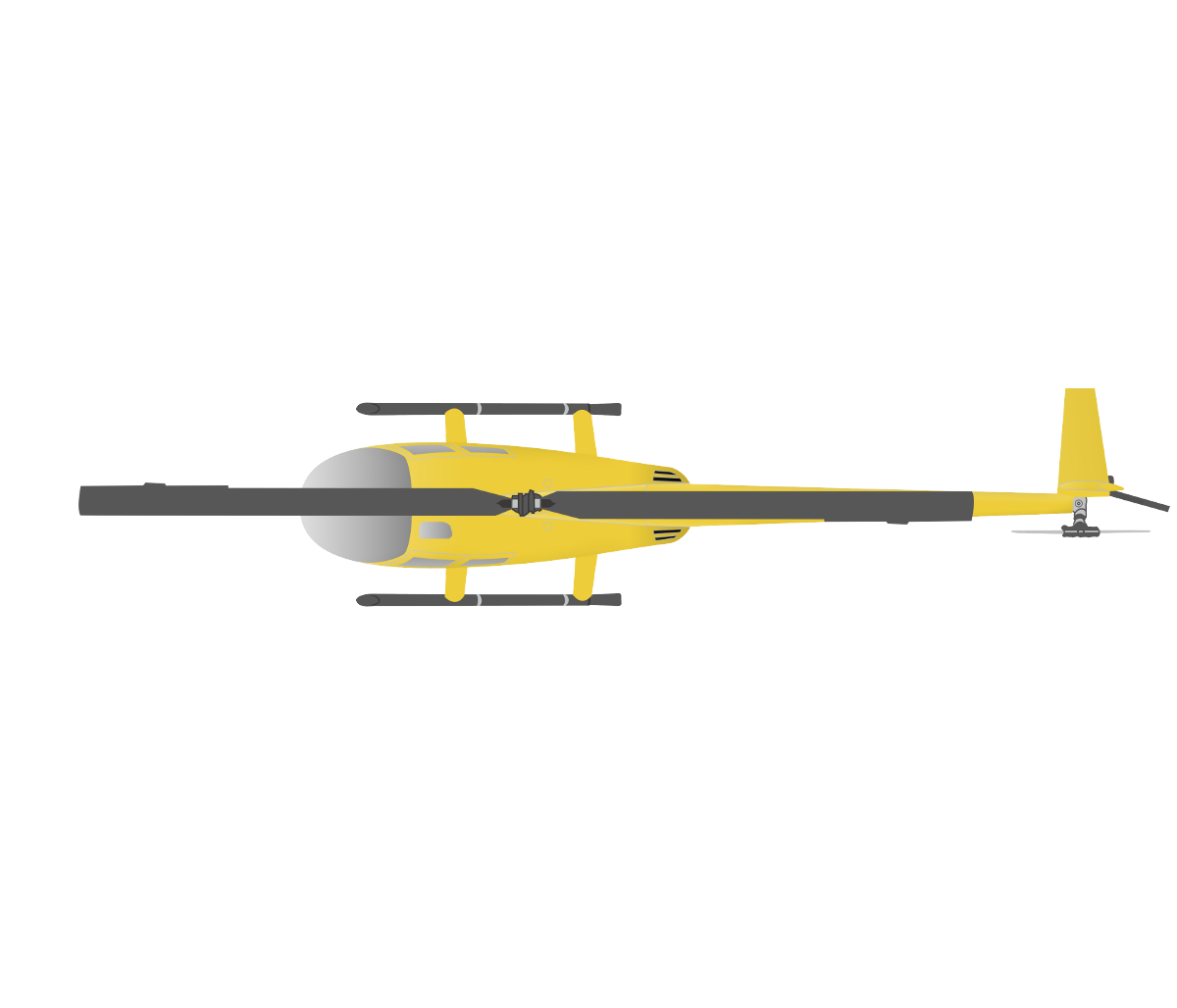 A post was merged into an existing topic: EG’s garbage bin