I first reported this issue Feb 2018 (Vehicle AI and Pathing). Devs reported, back then,it was a known issue to be fixed. It lives on to haunt us.

When might we expect a fix to this well-known bug? 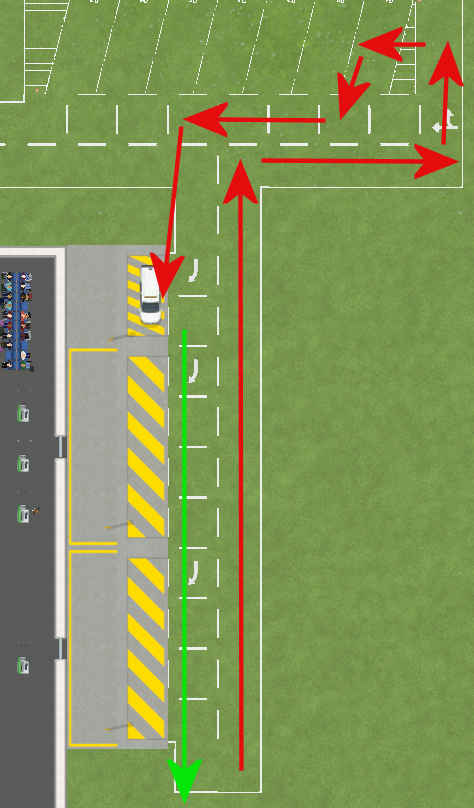 Maybe that’s because the driver changes his mind so fast. Really, that may occur because he wants to park after work and then something remind him about the job to do.

I noticed that too (but not in Feb. 18, like you).
Drivers like this cause traffic problems at my airport.

Vehicles and employees alike today abort activities such as parking or going to a staff room if they’re still on their way to that area when a new job task is assigned. You can easily test this yourself in a simple test world where you have two employees, one in a staff room, one out cleaning stuff and invoke a new cleaning job (right click an object) as the nearest employee is moving back to the staff room. The same goes for vehicles, they both operate on the same generic code.

Judging by that screenshot it looks as if the car has already started parking, i.e. it has arrived to the parking lot, when a job task is assigned. This means it will continue to park, and then dispatch itself again once parked to the road. I think that’s more realistic that a driver would exit via the parking object than just floor the reverse, so that’s intended behavior.

Olof, my friend, you missed the point of my post as well as that of my February 2018 post. Given your explanation, the Service Car should NOT have followed the green arrow, then returned via the red. 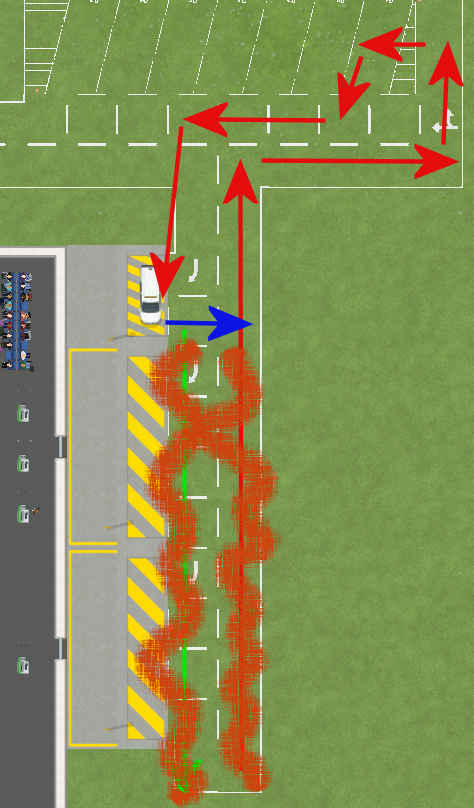 I see, IIRC the original request, and fix, were in relation to some of the more ridiculously long paths which we fixed by enabling vehicles to turn around in front of stand entrances. As for this particular path, I agree that it’s not an optimal path but the current vehicle nod point system does not allow for a quick fix unfortunately. It might be something we’d look into if there’d be a higher number of complaints about it.

Ok. Thank you for your quick response.

I built one block side pieces of road nearby vehicle depots, etc so vehicles can turn instead of driving all the way to a crossing or in your example a parking lot to make the turn. Not ideal, but it works.

i got the game when first available. one way roads was huge problem back then and still it is. how many times i rage quited because of some stupid vehicle does not go the way it should. since it is alpha stage i did not complain, i knew what i was gonna get. but we need one way roads to build great terminals

I’ve noticed this too. Baggage trucks follow the red path when they should be following the green one. 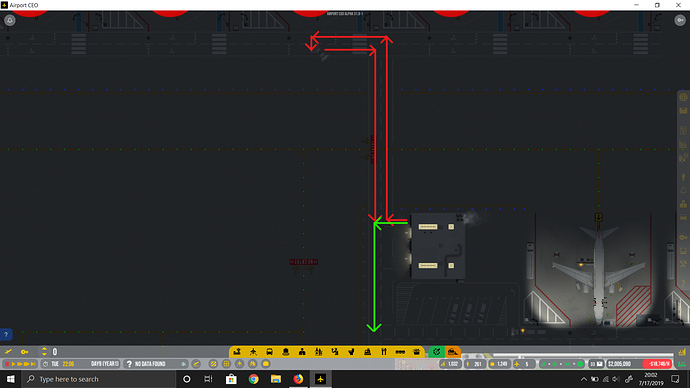 @Olof can’t this be implemented for other structures as well? This happens with structures when the vehicles need to travel on the side opposite to which the structure is built.

Fredrik or Olof, would pathfinding be btter if you changes the road structure into pieces instead of dragging?
A system where you’d only drag straight pieces of either one lane or two lane roads wich only connect at intersections and curves placed seperately.

Maybe not the best solution but you can mitigate this issue a bit by placing a double road piece right beside the vehicle depot, that way the vehicles can make a turn and move to the left.

It is a two-way road, if that is what you meant.

Could you please explain or show?
I think I don’t understand what you mean…

I think it’s time to implement one-way roads, it’s not that difficult (we could probably copy and paste the code aspect of how one way taxiways work) and it would solve a lot of problems. One of the main issues with the vehicle pathing system is that it is…

Regarding the second point we would probably have to make a really dedicated effort to enhance not really the pahtfinding but more so the connection between roads and the traffic rules themselves. I can imagine that the Cities Skyline people had a minor team to deal with their traffic code and we would probably need the same.

Regardless, one easy task that would bring notable improvement as I said would most likely be one-way roads, and in the meantime we implement that we could ponder on the other changes that need to happen for vehicles to move around a little better.

One way roads would be so awesome. Could the same logic be applied to make one way corridors for people? The only one way tiles we have at present are the security entrance and exit.

For people it’s a bit more tricky… as we did actually include one-way escalators in the early stages of Alpha 31 but there were several design cases where it did not hold hence why we had to disable it. But yes, it’s something we’ll look into as well as we really want to get it working, it just needs a bit more thought activity.

For vehicles and aircraft it’s a lot easier. We’re actually doing a pretty “ugly” hack there, because we’re simply blocking a certain node from being found by a path coming in a certain direction which would be very neglecting of performance… if it wasn’t the fact that the pathfinder is super optimized, we have way fewer nodes for taxiways and roads than for persons (lower node granularity) and also a way lower number of agents invoking pathfinding calls.

The Taxiway pathfinding around 25 was excellent in terms of planes heading to runways and taxiway blocking. Taxiway blocking has gotten better but I had planes waiting on a couple of exit taxiways to the runway, now they only seem to take the same route.

I agree, it’s very hard to force planes to use different routes.
Even with complex one-way-paths, planes seem to prefer same routes, even same runway…