i have a airport with two terminals.
I´m unable to open the windows to assign staff and vehicles to terminals, so staff/vehicles are out of balance and flights are delayed by the shortage on staff on one terminal.
I created already a ticket but unfortunately it could not be reproduced.
ACEO-40394

My savegame is, in this state, broken. Is there anything more i can do?

Here is a screencast:
https://imgur.com/a/bgxLsaE

i found the solution
when i press the key “t” it works, didnt know about this possibility to open terminal overview
i still think that this is not intended so i opened another ticket
ACEO-40582

Actually it works correct. The Button is called “create terminal area” and is not supposed to edit the assignments. 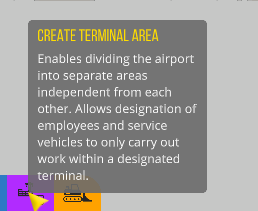 To view the terminal areas and edit the assignments you have to use the terminal overlay. That’s the following button or as you already figured out the T shortcut.

yeah, i guess it works as intended
but i´ve done in before in that way i described and its a bit counter intuitive if you have the same layout and buttons and you can´t click it

ACEO-40394 Unable to click/select the icons on the terminal overlay to see and edit staff/vehicle assignment. Clicking the icons removes the overlay view and the menu does not appear. [image]

Same for me i have this issue on Beta 5! Very frustrating, but a tip as a workaround, place a depot or parking lot for service vehicles within the terminal zone and assign the vehicles to that. It isn’t perfect, but can help short term. Maybe add reply in the Beta 5 thread too

and see if what i’ve reported is same problem

As I wrote in the other topic, @Alexander will have a look at this for beta 6.0-4!

I tried that, but my airport has already 10k pax. I don’t wanna micromanage my vehicles. I’d rather just assign them to a terminal and they hopefully decide there best vehicle lot.