Currently the game does not work with two different secure zones, and hence multiple terminals. The only way to work this presently is to have just one secure zone. Jettuh has built a couple of builds with two separate terminals but do share a common secure zone, do a search for them and you will find some excellent step by step to his builds.

Use Baggage carousels to separate PAX streams, mostly works wonders with seperated secure zones. Only staff will run around in circles a lot.

Are you sure? I believe we did deploy a few fixes related to secure areas as of 27.8-3 but I could very well be wrong (or there could be more bugs).

I’ve not tried in a while I will admit. If you’ve made some fixes I’ll give it another build and see how it goes.

Are you sure? I believe we did deploy a few fixes related to secure areas as of 27.8-3 but I could very well be wrong (or there could be more bugs).

Can you maybe explain / list how secure zones should behave with separated zones?

You should simply be able to have two separate secure area, i.e. ”secure wing A” and ”secure wing B”. I sadly cannot provide a pic atm since I’m on mobile.

I’ve got the perfect old save game to test that. Two wings. Drive safe. On the topic of saves, it would be very very useful to get a screen grab of the save in question so you can see the build before you load it up. Maybe use the same routine that the bug finder uses.

, sounds good, lets go against @pderuiter again; to avoid lots of looping / mixing staff between such zones, it would be nice if zones had an ID and that ID could be appointed to cleaners, administrative workers, etc (or STAFF, more generally speaking). Next level would be “custom” zone ID’s, but lets that to the feature request forum.

Hmmmm, either I’ve set it up incorrectly or something else. Strange the incident tracker also showed “Resolved” 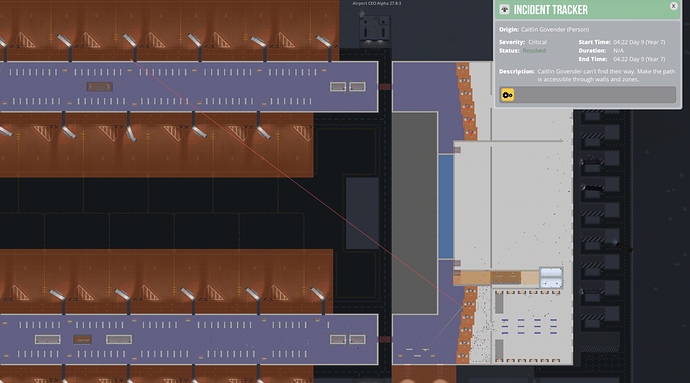 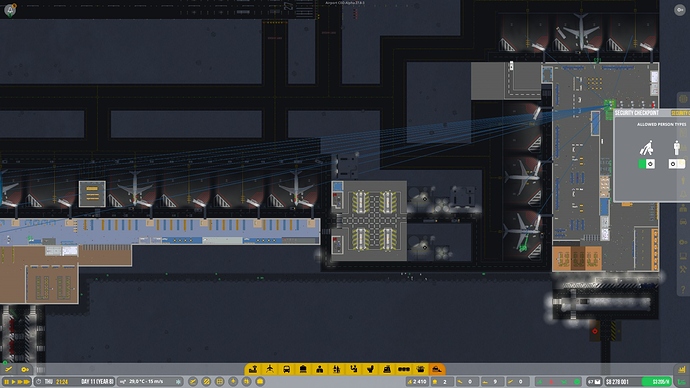 Do you see what i´m saying. Security channels of right side are connected to stands of left side but the terminals are separated.

Oh @ rubble, I like the synchrome medium stand placement.

I’m having the same issue. I had two separate security zones (one for small planes and one for medium planes) that were working perfectly.

Then I connected the two zones with a staff-only area and now the security checkpoints have connected to all the planes stands. Now I’m going to have to rebuild all the security points to fix this.

It would be nice if you could manually override the security points and connected them to specific stands. 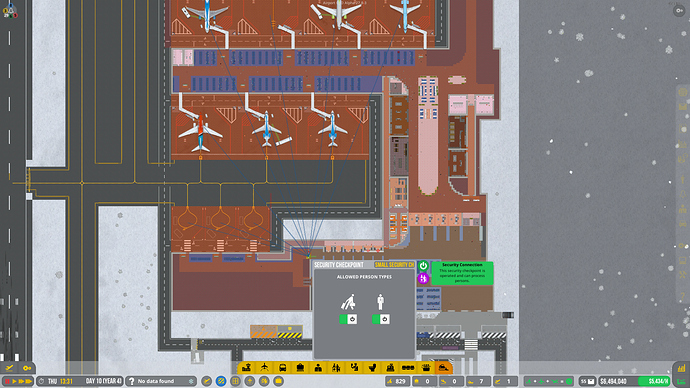 Edit: Another security issue I ran into is that while you can have staff-only entrances, you can’t have staff only exits. So passengers try to path though the staff zone to go to an exit they cant reach.

You can have staff only exits. Just drop down an exit then Zone it as staff. Done.

You can have staff only exits. Just drop down an exit the. Zone it as staff. Done.

I’m working on a walkthrough/tutorial how to setup separated security zones and how to mitigate issues. You can find some info already in this forum thread:

Hello fellow CEO’s I have redesigned my airport and came up with the below, [aca%20overview] As you can see we have 3 separate piers, each operating independently from each other, own security and secure areas. Each pier has 8 gates, 5 security points, shops, restaurants and staff room [aca%20security] [aca%20wing] I have forced shopping after each security point and also at the exit of baggage reclaim area 2 [aca%20baggage] Outside of the pictures we have 3 runways, 2 for arrivals a…

Looking at your picture, the two secured areas are connected behind security. There’s a secured passage connecting them, so it is only one secured area, it is not separated. In this case all gates will connect to all security.

I solved the issue. Even after separating the two security zones again, all the checkpoints were still connected to all the gates. I dezoned smaller wing and rebuild the checkpoints, check-ins and plane stands.

After that the game recognized the two zones were to be separate again.