I have redesigned my airport and came up with the below, 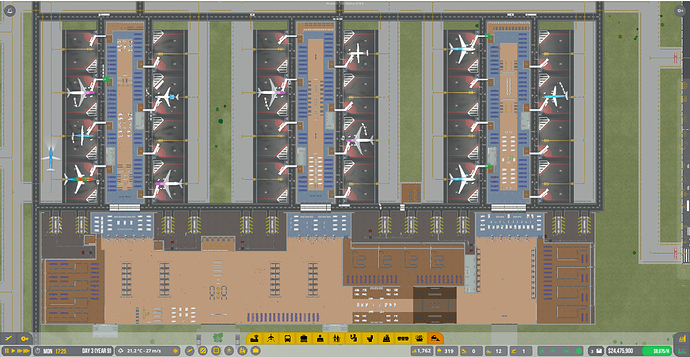 As you can see we have 3 separate piers, each operating independently from each other, own security and secure areas. Each pier has 8 gates, 5 security points, shops, restaurants and staff room 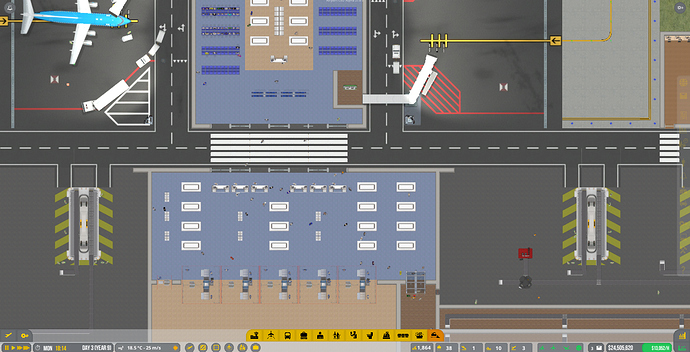 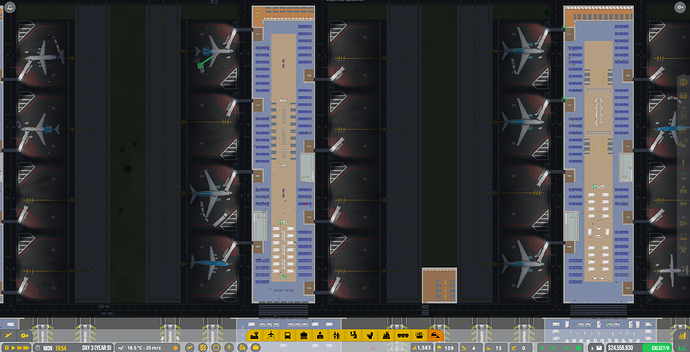 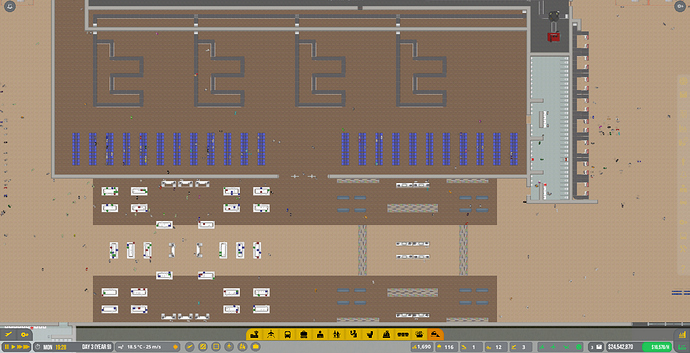 Outside of the pictures we have 3 runways, 2 for arrivals and 1 departures

I hardly have any delays, as everyone is near the gate they are departing from, I have 1 baggage bay to 2 stands.

What do you think…

I like it, how did you get an issues with passengers going through the wrong security gates?

That is so cool. I don’t have the time and money to do that XD.

Thanks. No issues with passengers going via the wrong check point, the security points are only linked to the gates in that secure area. 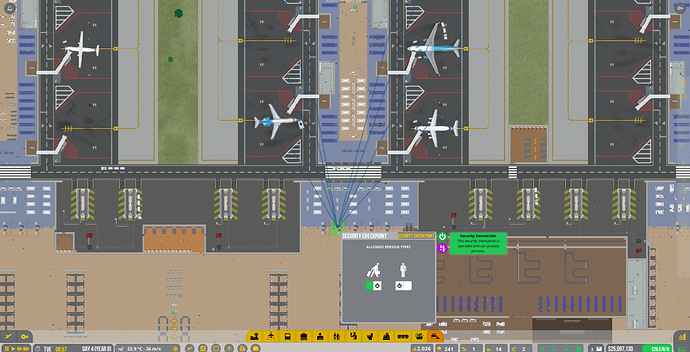 Hmmmm, perhaps something to do with the baggage system then. My gates seem to lock onto every stand.

Nice solution! But is there no interlink between the security zones?

No, none at all. Each secure zone is separate from the next. I believe that the security points will only connect to gates located in the secure zone it is linked to.

Did you do anything special to get those separate zones to work like that? I’ve just tried it and they connect to all for me.

not really, i was under the impression that as long as the zones were separated the security would link to the gates in that zone, Here is my zoning if that helps. 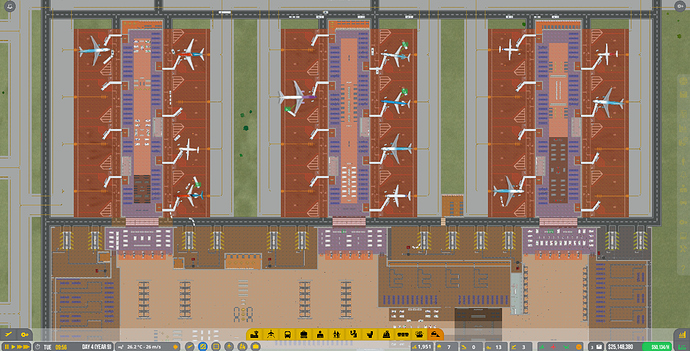 Edit: Added some results to the test, apologies to @ceoandy as I do not intend to highjack your airport thread…

If you want this out of this thread, just PM me and I’ll move it to a separate thread.

Just did a test in a new build and sometimes security stations do connect to other stands and sometimes not, there is probably a minimum distance for the game to decide that. This was all in one wing, have to test a bit more if that will work if PAX are going to use it.

Did a quick test and it’s fun to see how the path system works: 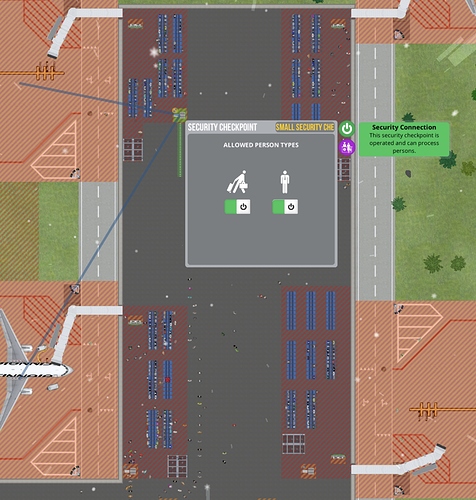 sec11780×1866 664 KB
Security system connected to 2 medium stands, but the security zone is not connected 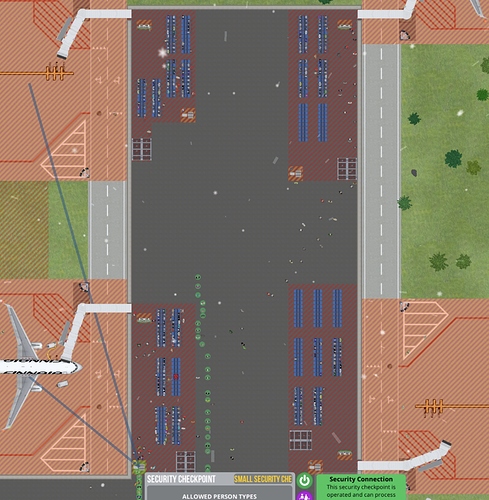 sec21848×1886 709 KB
Same for the medium stand below, so the two left stands are both connected to the same security zone but the zones are not connected 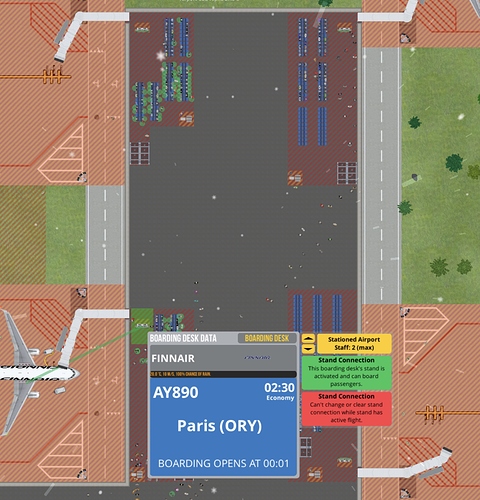 sec31794×1868 671 KB
This results in PAX being divided between the two stands and they will not even try to go over to the other stand. They stay in the security zone they are in and when the plane is ordered to leave the PAX in the ‘wrong’ security zone all leave to go home, as they should because they missed the plane. 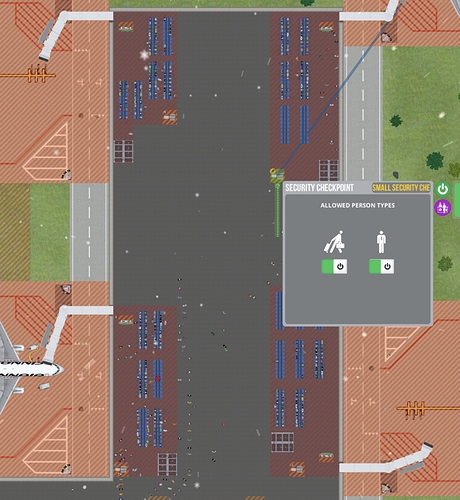 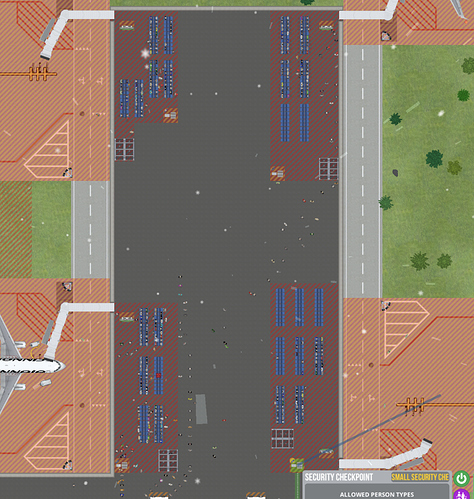 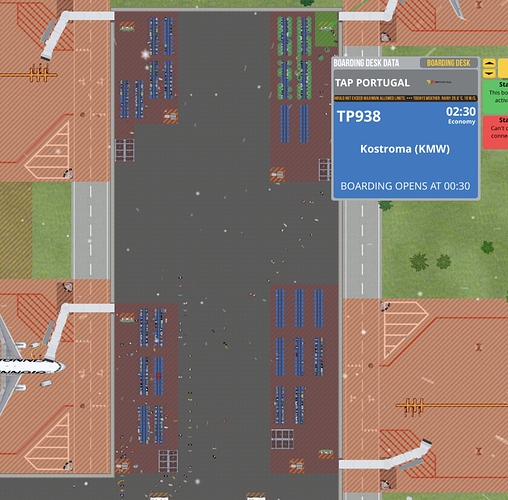 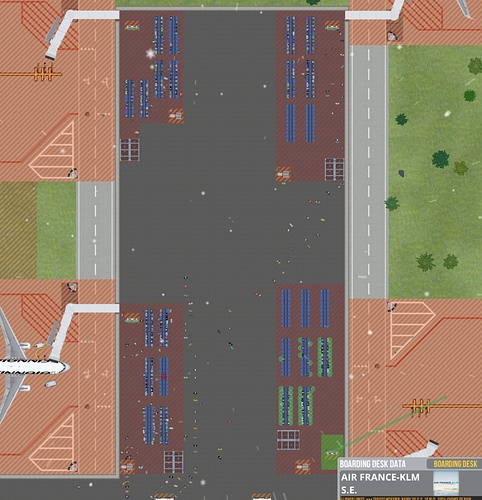 So the system works as ‘expected’, things that are interesting are:

PAX seem to divide around 50% between the separated security zones, question is why 50% and not 80/20 or any other %?
Why is the PAX path finding not trying to get to the correct boarding desk in another security zone?
Security zones can be separated, but it’s not clear how to separate security zones, is that based on distance between zones or just at random? As the zones created are roughly the same distance and still some are and some are not connected. Have not done a full check on station or stand separation.
After connecting the 2 zones of the two left stands, the PAX directly start moving and go to the correct boarding desk:

Based on that last point, the path system does know about the correct boarding desk and where the PAX should be, but apparently the separated zones is a barrier to exit the secure zone and go in the other (correct) secure zone again.

Light conclusion to this; It is possible to separate zones and as @ceoandy has proven as long as it is in the same building you can have different ‘environments’, but it’s not completely clear (yet) what the criteria are to create the separated zones. As in the setup above I would love to have security at the boarding gates (for some zones or airlines, etc), but as it is now that is not configurable so for now it’s trial and error, built and re-built.

I think I can see your problem, on the left your secure zones are still touching. You have a secure area on the grass between the gates, if you take that away it should work. I have just tested this with just 1 square separating the areas and as long as they are not touching it works ok. You may need to delete your security and rebuild once you have separated the zones so they connect to the correct gates. Let me know how you get on.

And do a save and reload @Puma if it has already been connected. That was what my issue was @ceoandy.

Removing that secure zone between the stands indeed separated the security desks, but only after a save and reload (thanks @Rubble)! 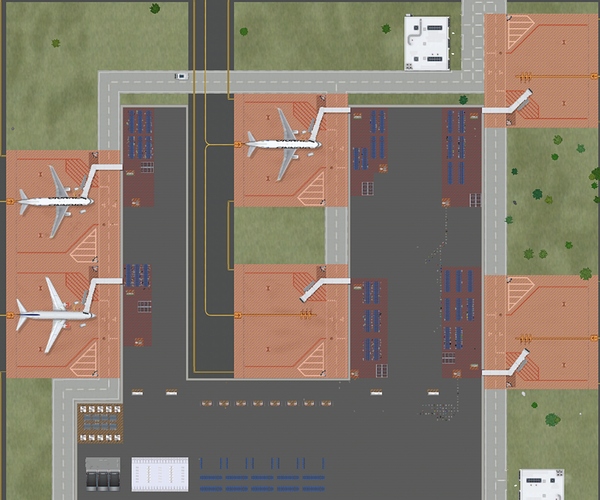 security2298×1914 638 KB
Full overview of the test airport, please do not pay any attention to the layout etc

After some more testing it turns out that the game does not connect stands with security area’s, you can even built them only 4 blocks away (minimum amount in the game) from each other and still have the secure zones separated: 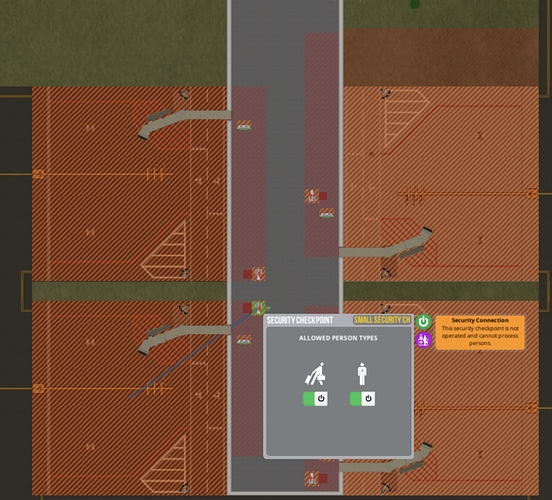 There has to be a security free zone between the stands to be able to separate security desk connections. But this way it is possible to built security at the stand instead of a centralised security or have a mix, just as you want it, which is very cool!! Please note that the game tends to somehow connect security zones virtually when building boarding desks, which causes the security stations to serve more than 1 stand. That needs some more testing, but with a save and reload that should be fixed.

I’ve read through this topic and am happy you’ve gotten it to work, as we expected multiple secure zones to work by now… but could someone give me an “executive summary” as to if anyone is experiencing any problems with constructing it? I.e. does it work only after reloading or… ?

The reloading is only necessary if you’ve zoned it as one area first, then divided them into multiple ones. Without the Save and Reload it still treats it, for Security Stations as still one area. The reload will then sort the splits out to separate ones.

The reloading is only necessary if you’ve zoned it as one area first, then divided them into multiple ones. Without the Save and Reload it still treats it, for Security Stations as still one area. The reload will then sort the splits out to separate ones.

All right, that sounds about right, I will make an expedited ticket and put @Fredrik on it immediately once he’s back!

Glad you managed to get it sorted. Thanks to the developers for making this happen.

Will create a summary this week, as I have to do some more testing. I’ve seen that when placing boarding desks for the first time the security stations seem to be connected to multiple separated stands and as @Rubble states it looks like that is solved with a save and reload, even without changing anything in the zoning. But want to be sure what the steps are for building this and if there are issues. Will open a new topic for the summary and maybe a guide (if I have time). 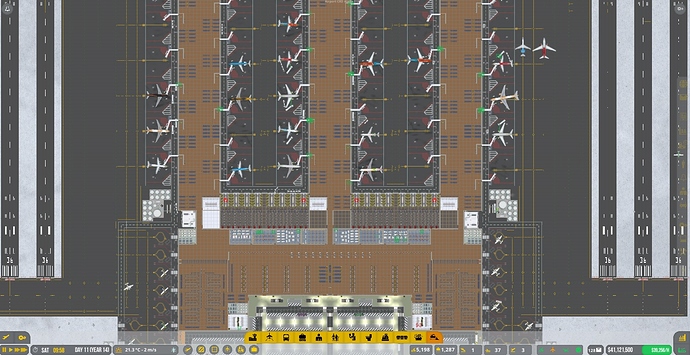 Building wise your airport is very similar to mine. I had gates at the end of those piers but I will utilize them for remote stands once they become active.