Thrust reversal, also called reverse thrust, is the temporary diversion of an aircraft engine’s exhaust so that it is directed forward, rather than backwards. Reverse thrust acts against the forward travel of the aircraft, providing deceleration. 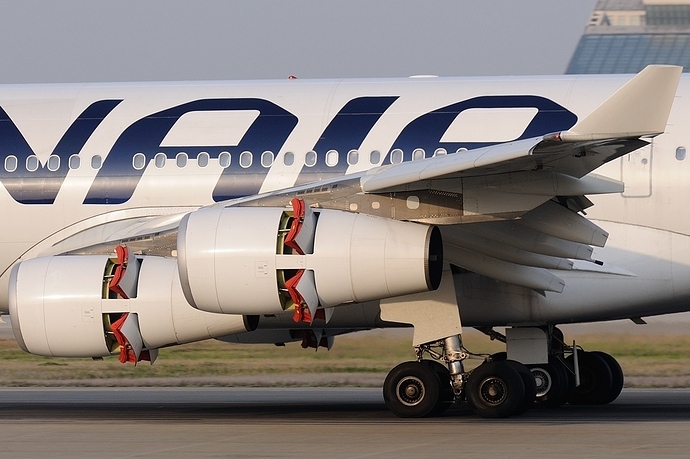 Since we were on topic on having more and bigger aircraft. Will we be able to see these kind of details of the plane when its thrust reverses are activated during landing? I think it will be a brilliant if the Devs consider adding it to the game on each aircraft especially when we watch each plane land up-close. Plus different plane different type of system.

This level of detail would be nice but certainly not high on the priority list i hope.
let them build a game first before adding specific animations to a few aircraft

Of course the structure of the game is the main priority. This is for once the game has covered up the main basis then for our Devs to consider and decide whether to implement them😎

Sure, it would be a nice detailed feature

When you use thrust reverser after landing, there are several things happening. You have a strong air flow which goes forward. It basically gets all the things lying on the ground up in the air, and forward. That’s why it’s limited for a speed (most operators shut down reversers below 60/70/80kts), but also puts higher limits on runway contamination. So, basically when you have reverser, you need much cleaner runway (so more money to be spent on runway cleaning and maintenance).
There’s also a procedure called powerback - which is in principle going back on reverse thrust. In general powerback is not used too often, but still remains an option, but few things limit that - like buildings in front. The airport operator specifies if powerback is allowed, and on what stands. That’s a quick solution when you’re lacking pushback tugs, for example.

That said, the fewest planes can pushback themselves. Of the larger planes only the DC-9 and MD-80 can do so because of their unique thrust reverser style, the position of the engines and most of all the engines itself as the JT8D are low-bypass and can handle this extensive misuse of the T/R while the high bypass of 737/A320 would go nuts quickly and can’t develope in their basic configuration enough thrust backwards.

Concerning powerback, you are right and wrong at the same time

Sure enough, DC9 and relatives can do powerback. STill, it’s not the case of the engines, it’s the T-tail system and relative height of the engines.
The same powerback can be done for example on Embraers E135/145 (even if SOP - Standard Operating Procedures - forbids it, it has been quite often performed all around the world) . Same with turboprops like ATR 42/72. I know people who have done that.
Not to mention old Russian planes, like TU 134, Tu154, Yak-40, or talking turboprops - An24 relatives.

I think powerback can also be achieved on some cargo (military cargo, especially) planes with high-mounted wings, like C5, C17 or IL76. But have no evidence on these.

PS. Edited to reflect difference between SOP and real world.