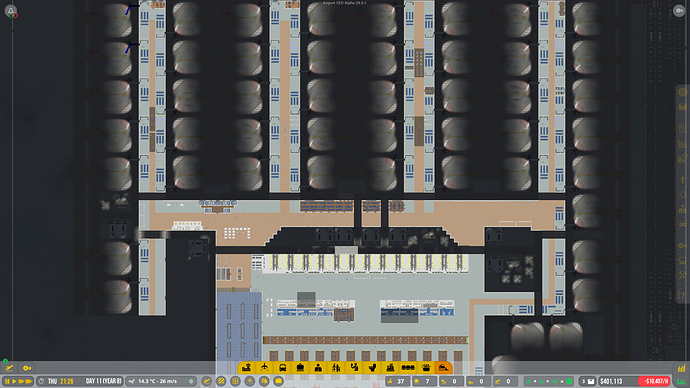 Obviously, a source of delay and congestions… security always is I suppose. Is there any point in using the bigger security checkpoints instead of the small ones?

Nevermind, I now notice it didn’t capture the security people, one sec 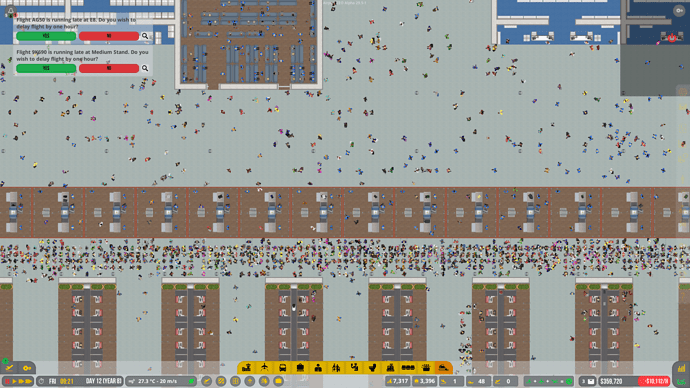 When you queue them up in queues it looks different, just a suggestion.

Then you can see what the “work queue” is, and what is “overflow”.

Did that… good suggestion. All it did was stopped them from piling on top of eachother. They stood in nice little lines while the TSA crushed me… There’s 26 security checkpoints unable to keep up with 51 gates… that seems off to me… It’s also the source of all the delayed flights and the inconsistency in which flights are boarding nearly perfectly and others have no one at the gate waiting to board. Of course, there’s the gates that have everyone at the gate and no gate agent, but that’s a problem waiting for the fix of the room/zone bug. Can’t find the save file to edit the error, so not going to make the error… This is going to take a complete reworking of the PAX flow… I sense another 12 hours tomorrow for lack of a better brain game… and foot ball.

How many times is the medium security faster in meanings of the speed the passengers are handled then the small ones? Maybe this is something the devs should look on.

Have you looked at increasing the efficiency rating of each security station? I try to have mine above 1.5.

Does one need to hire better security staff in order to do so?

I have about 4 small ones that are actually quite a bit faster than the mediums. Granted, it’s only employees rolling through them, but still.

That’s the topic/intent of this thread. How does one do such a thing as increase the efficiency. Of course I would love to get the efficiency above 1.5, but I don’t know how that works. It is something I am now exploring with this post and game time because it’s not sustainable. My airline rating is crashing through the floor because of the delay in getting people through security.

I also don’t know if there’s a point to firing terrible skill employees, other than now I have to replace them.

Is there another thread of this topic I"m missing that is up to date for the version of the game?

Do you routinely adjust your staff based on their skills? I know this sounds ridiculous, because in RL, hellz yeah I would, but I"m not sure how they game mechanic works, if it even works yet.

I would also say if the employee skills are an actual thing, having access to more than 5 applicants at a time would be helpful. Granted, that seems like a skill level of the HR executive to me. I usually end up hiring all 5 of each type. Perhaps it would be a good time to start to get rid of some of the really terrible people…for all crafts for that matter.

When I start a new game I just hire anyone I can get available so I’ve got a workforce that works.

I check the applicants panel, especially for Airport Staff and Security. No good ones, I just reject the lot and wait for new hires. So just took a screen shot of applicants for security.

Faith Kamua would be a good hire. High logic and stress. Kelly I would reject. Li Na I would hire as well. Teddy a straight reject. Minji is a considered. I would now swop over to look at whom I’ve currently got hired. Minji has a better Logic and Stress than any of my current hires, I would fire them and hire Minji. Over time you’ll end up with a well balanced set of security workers. Not having more than five candidates is frustrating I agree, especially if you have a large airport and need to do mass hire and fire. I’ve not really seen anyone write the above. I’ve gleaned this information from pieces the Dev’s have said and experiments of my own and conversations with Jasper. Hiring and Firing till you get a good set of staff. Airport Staff, Security and Service Techs you can usually get a good strong workforce going quite quickly. Ramp agents and Janitors that’s another story I’m afraid.

Looking at some of my current staff too, I have one Security agent with top end green bars for Logic and Stress and very low red bars for the other two. The security station has an operating rating of 1.56.

@jasperwillem has also experimented with hiring and firing too.

Edit: I’ll also hire a few more than I need as well so when I do expand I’m not looking for a decent staff member.

I think the devs said that as of now the skills of the employes have no influence. It will be in the game in the future.

But yeah, medium should have a faster PAX-handling rate.

Not quite. It does have an effect but only, right now on security staff. Everything else it does have no effect as you quite rightly mention.

This is a first step and it is fairly experimental at this point. We are testing the concept and see if it works well we will expand to all employees. I think the idea is that certain employees will get bonuses on certain skills. For example, a service technician with high stress management and service will not get any bonuses out of those skills but instead favor logic and technical ability. Also training is something we can look into later on.

I’d love to see what your public transport setup is like as well?

Well, I had a lot of people in need of being firing, numerous security checkpoints at .85 efficiency or so. This works out ok because i had a lot of extra people needing to thinned out. 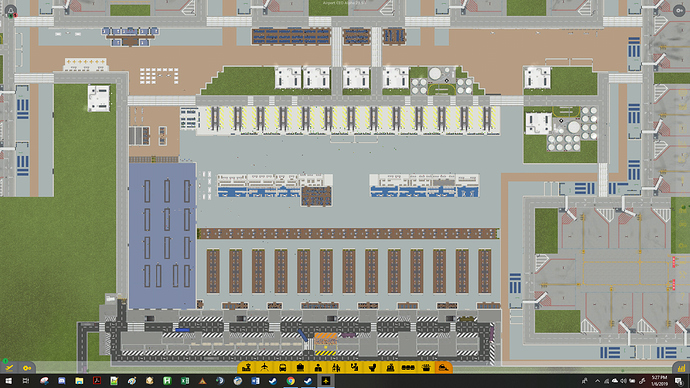 I think it’s in need of rennovation / reimagining… to much walking right now.

Im impressed that keeps up with your 7K PAX I will say. With my two to three thou I’ve got four subways and some bus stops and car drops too.

Thank you for that.