This topic is prompted by a little exchange on the “…Beta 7 Released…” topic, regarding Baggage handling and Small stands.

Background:
I have been long irked by the fact that when ever you enable baggage handling for your airport, all stands must be connected to a baggage handling system. This changed my original thinking of starting commercial operations with a small terminal with 6 stands on it and then using the profits it generates to start off a second terminal with medium stands.

This meant that when baggage handling is introduced, I had to shell out in the order of £200k to set up a full baggage system only to see baggage trucks wandering about the stands delivering one or two bags to a Cessna, 5 or 6 bags to a DHC-6 or 1900D. Not very cost-effective…

My strategy changed - instead of building a new terminal immediately, add 2-4 medium stands to the small stand terminal to make the baggage system more effective. The existing airlines have medium aircraft available, they’ll take up the medium stand slots. One baggage bay could handle 6 small stands and up to four medium stands with 2 Ramp Agents per side, if it did get busy, add another Ramp Agent. One problem is that some games, the airlines were pretty slow at generating medium flights, and half the slots were empty. In other games, they jumped on the chance to supply medium flights and I nearly bankrupted myself getting the stands built to cope with them, and the small stands became a flight desert. Signing more airlines to fill the small stands just heaped more issues on the medium stands.

So a ray of light came in the form of this exchange:

Olof:
[ACEO-40971 3] - Baggage handling set to not a requirement on small stands even if globally enabled

Me:
So we don’t have to have all those baggage trucks running around with only one bag on it for a Cessna flight?

No Fun:
And the small check in desk still has a purpose after baggage system for medium and large is active.

Then, how is the impact on the baggage service rating?

Me:
Good point - I’ll monitor that too - might take me a couple of days, but I’ll let you know.

This was going to be ‘just another build’, but with the above exchange, it became an experimental airport.
Going back to a stage where I could redo the climb to medium stands and avoid a few dodgy design and build decisions, the checklist for future development was as follows:

So London City - overall view at the start of the Experiment: 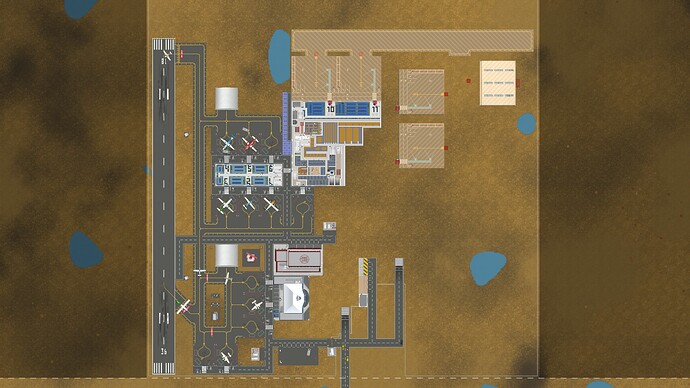 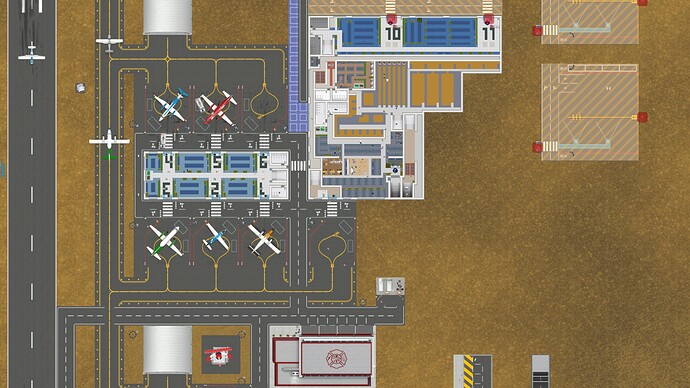 The terminal, Check-In Hall. 6 small Check-In desks - it is intended to keep these thoughout the Experiment, one thing on the monitoring list is whether the game logic will, when the baggage system is implemented, assign only small flights to these, and the medium flights to the medium, baggage bay-connected, Check-In desks. We already have three of those, and they are being used by the game for the small flights: 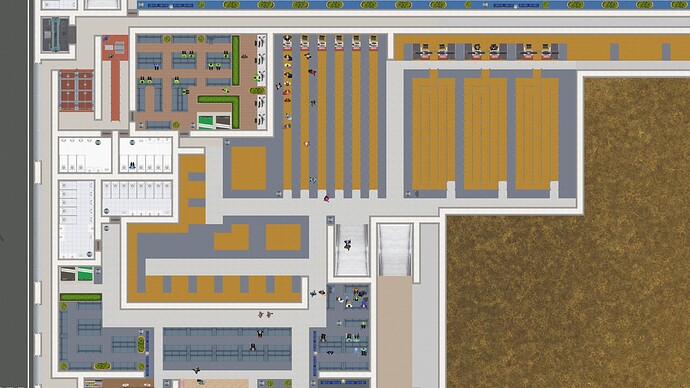 The flight monitor is full for at least the next 5 days, 5 airlines, each with their own dedicated stand, and the 6th stand is for overflow from the other 5 stands on a one-per-day slot, and a first-come-first-served slot at the end of the day. 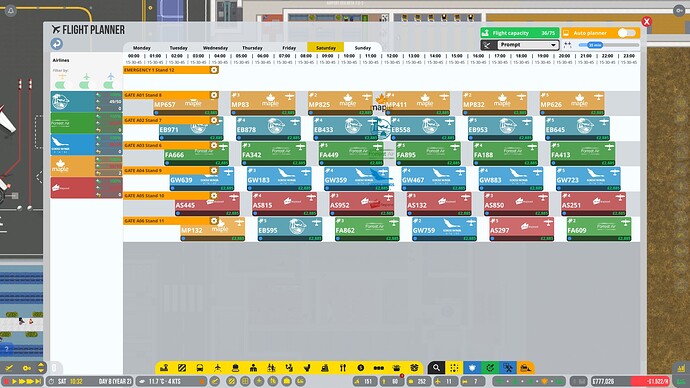 Tempus fugit, and there are two medium stands now in use, and Tulip Airlines have been signed to provide flights as the existing airlines proved reluctant to provide flights (other than the ones heaped into the scheduler when the first medium stand went down, but the runway wasn’t yet built to handle them). Medium flights are being assigned to the small Check-In desks, and occasionally a small flight check-in is delayed because of this: 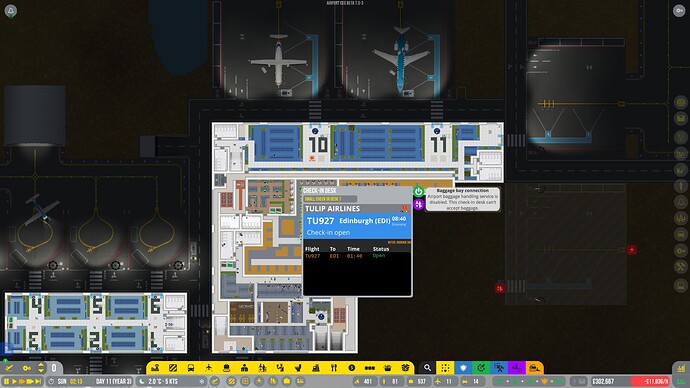 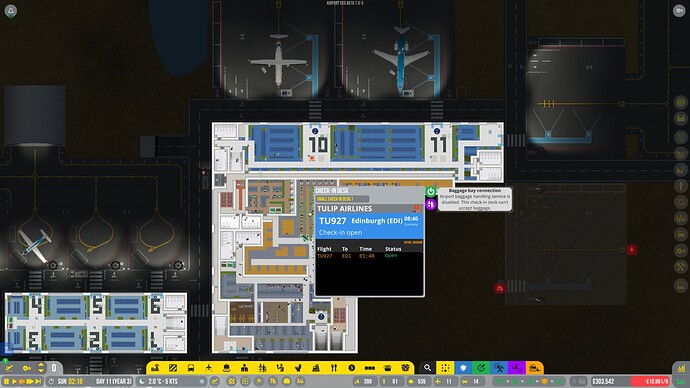 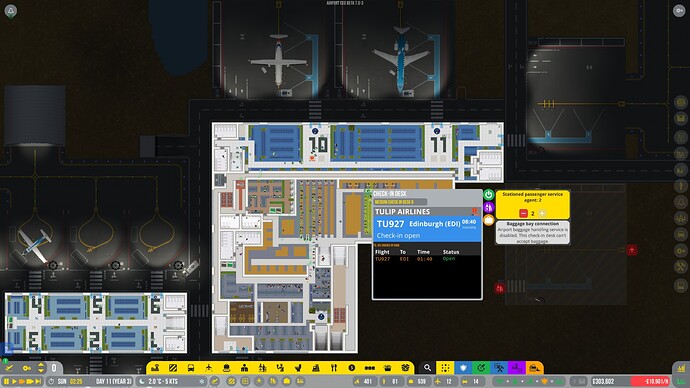 I’m now waiting for a medium loan to be paid off before constructing the baggage-handling system (underground). More news soon.

A while later, we now have all the baggage handling system elements built.

An aerial view of the current airport: 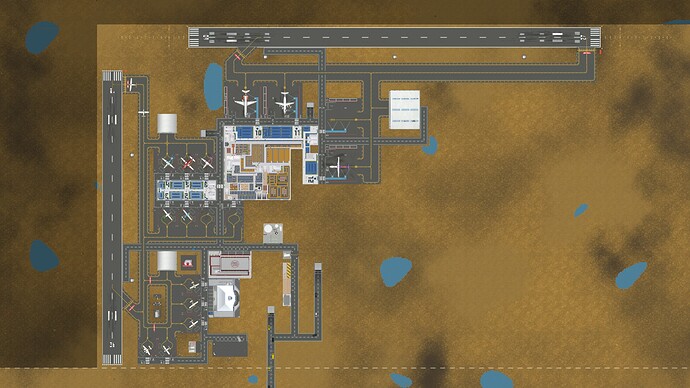 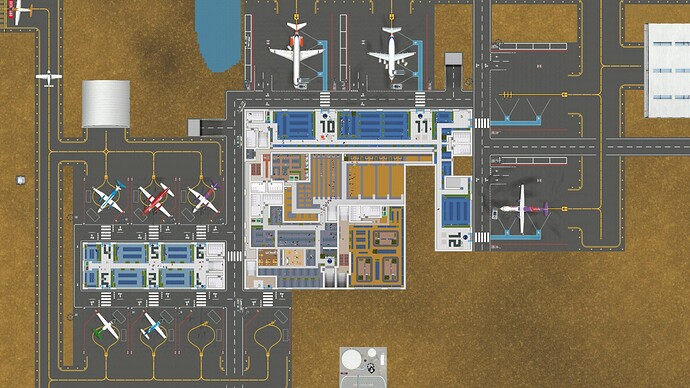 Check-In Hall, with expansion made for additional desks for the remaining medium stands. I have Automation researched, but have refrained from installing automatic check-in and baggage drop at the moment as I want to see how a manual system performs first: 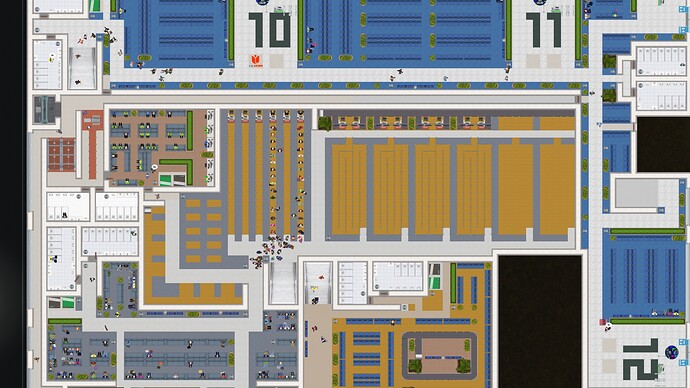 The game is still scheduling check-in for medium flights to small check-in desks: 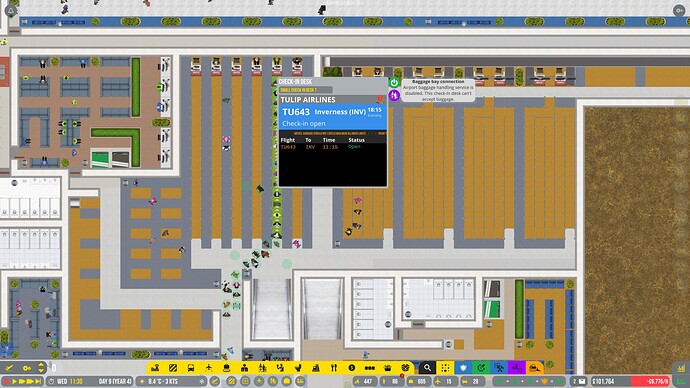 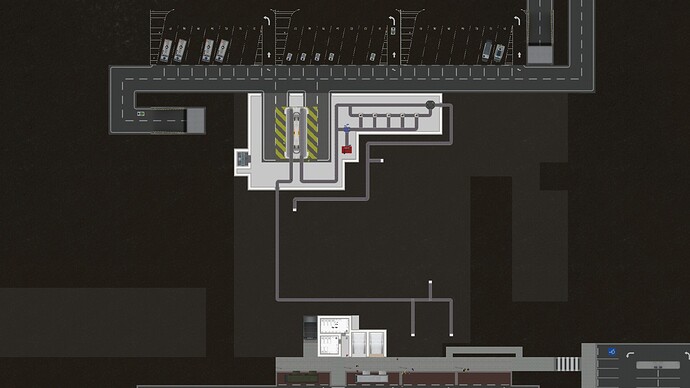 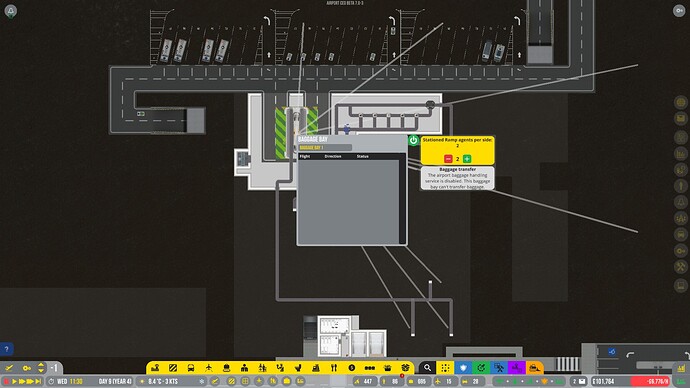 After the passengers have checked in, they go upstairs to Level 1, for Security and the Departure Lounge. There are comfier seats up here to deter the departing passengers from waiting in the Baggage Claim area for their flights (despite there being ample seating in the departure lounge and by the Gates). 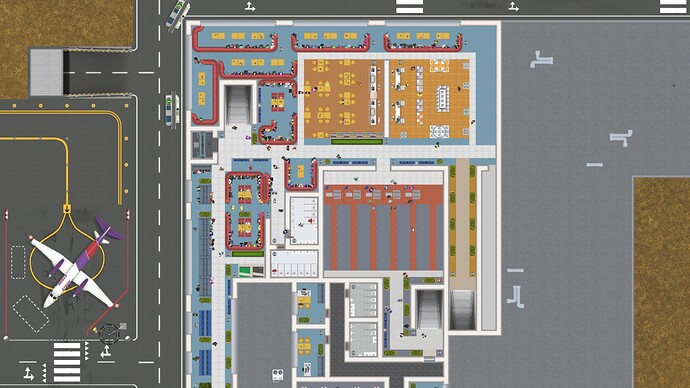 Arriving passengers pass through the Departure Lounge (those that wish may grab a snack or Duty Free goods on the way through) and then down to Baggage Claim, where there are three carousels for baggage collection. 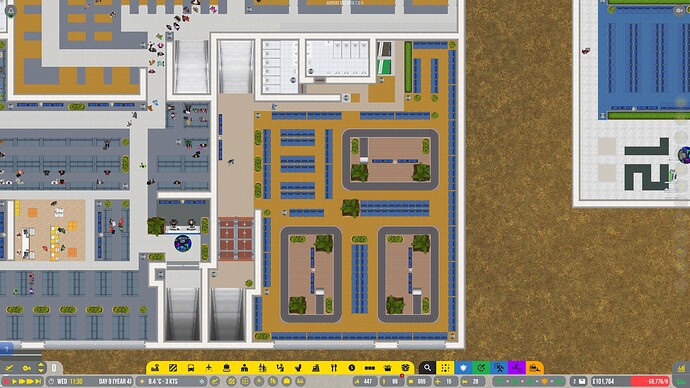 I need to recruit a few more Ramp Agents, and then all is ready for the Baggage Handling system switch-on. One thing that is still worrying me is the tendency of the game to allocate check-in of medium flights to the small check-in desks. If this continues when the baggage system is active, then there will be a lot of grief coming…

Enabled baggage handling system, but it seems that once enabled, all flights have to use a baggage bay-connected check-in desk, even if the flight is connected to a stand on which baggage will not be handled… 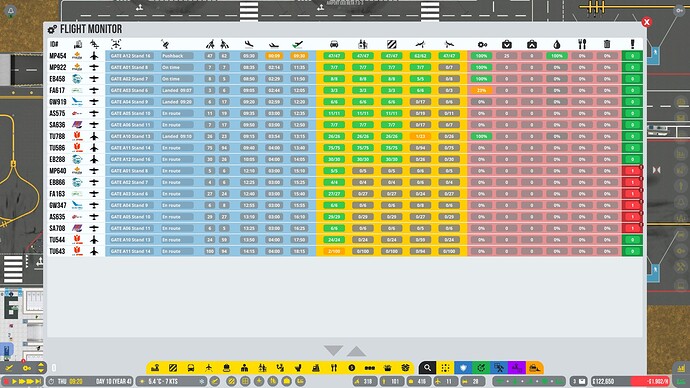 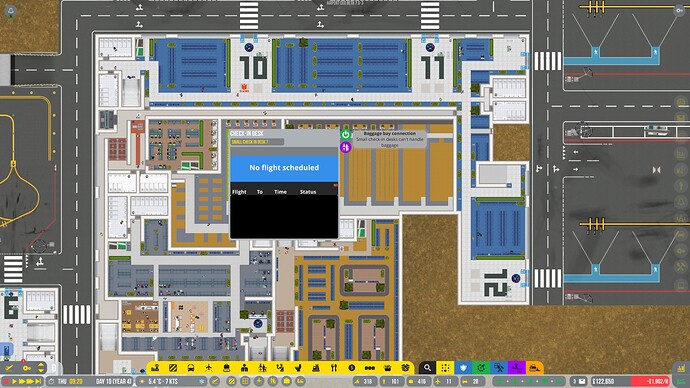 Take 2 - Another airport, this time with two terminals:

Terminal A - a small terminal with 6 small stands only - this one not to have baggage handling. 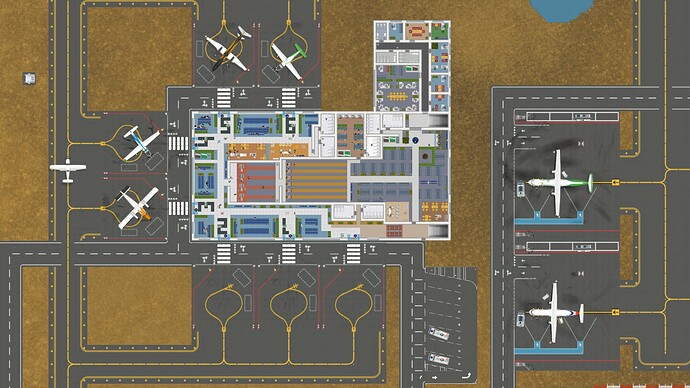 Terminal B - a medium stand-only terminal, with full baggage handling. 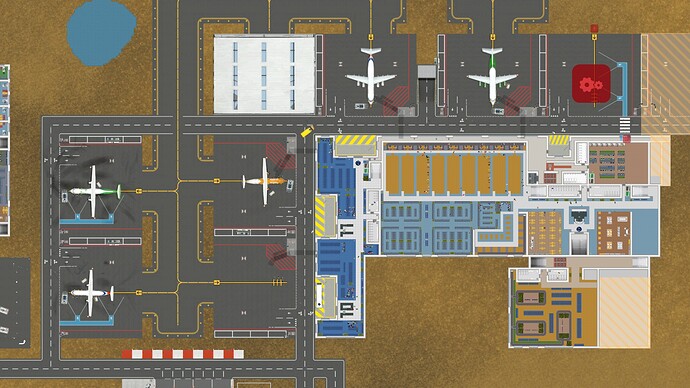 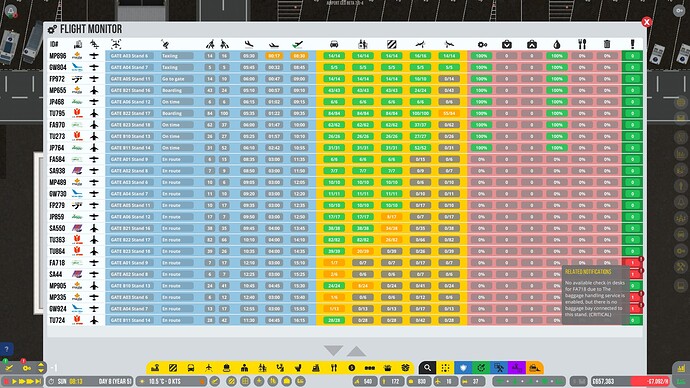 so basically it comes down to all check in desks MUST be connected to a bay because they could handle a flight that DOES require baggage.

I hope that they find a way to make it that if a check in desk is in a terminal that does not have a bag bay that it would not be required. 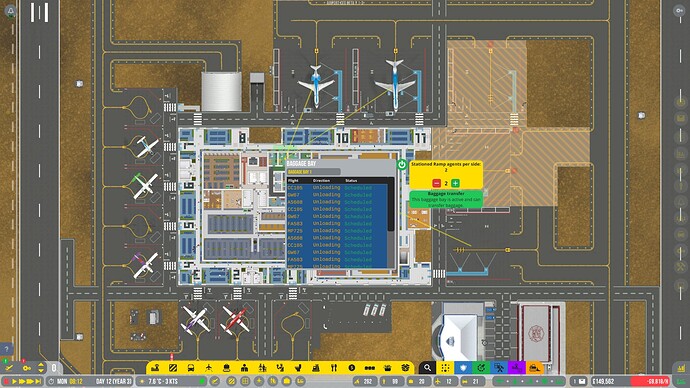 Issue should be fixed in the next update. 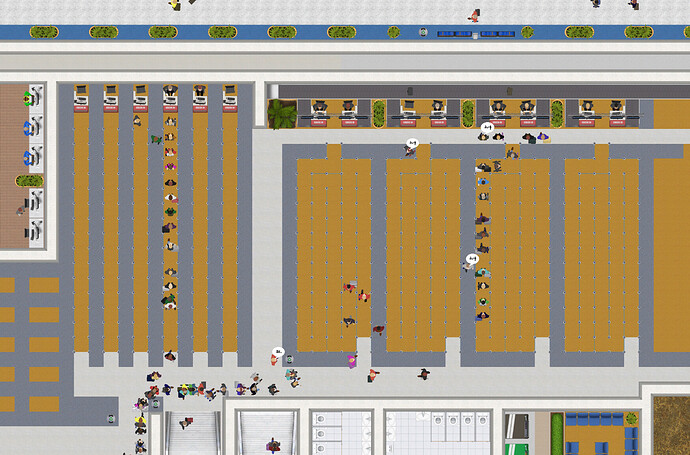 With a couple of fixes implemented and now running under Beta 8, it was time to revisit this project.

London City Airport, with a mixed small/medium stand terminal, and small and medium check-in desks. This now works according to the original Challenge specifications, and I have also been able to insert a small remote stand, baggage bay connected, dedicated to Strada Regional and their Saab 340B small aircraft. This also works with baggage handling while the other 6 terminal-connected stands do not have that facility.

Overall view of the terminal 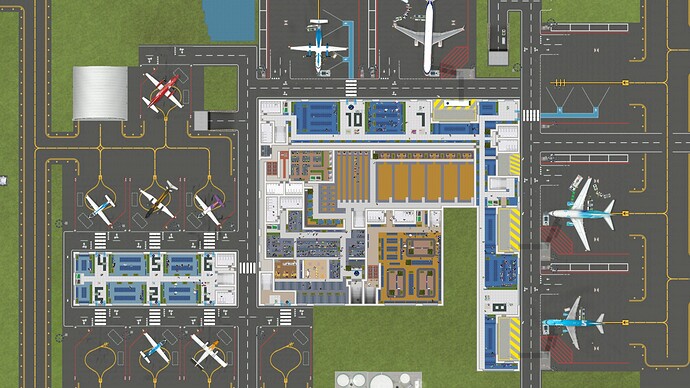 Passengers check in for Forrest Air flight FA810 to Islay. They’ll have to carry their own bags to the Saab340 provided for this flight. 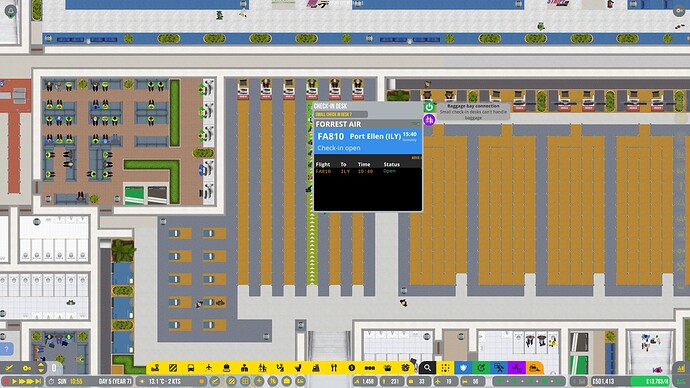 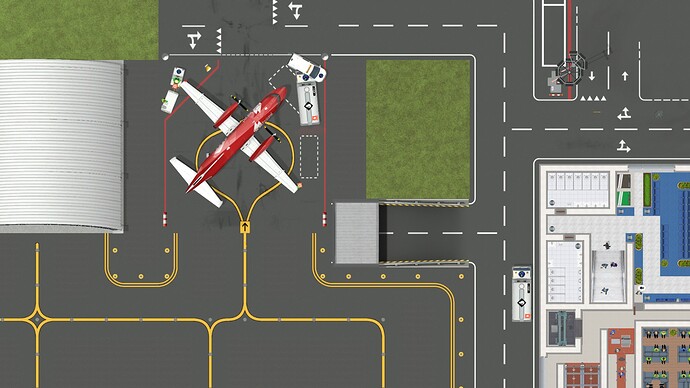 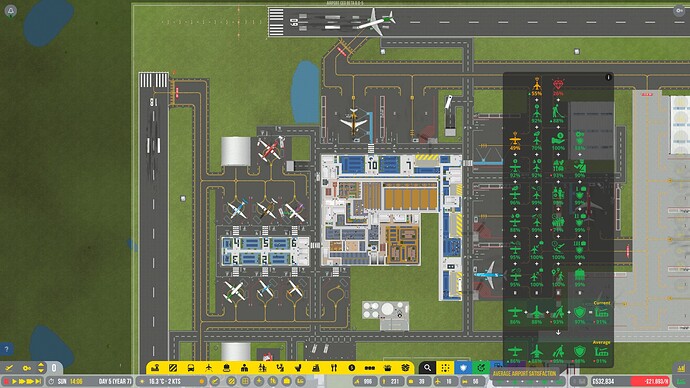 Haven’t played ACEO in a bit, do you select baggage on/off per stand?

It’s now possible that small stands can be without baggage services while it’s active for medium and large. Just don’t assign the small stands to a baggage bay and they keep the non baggage setup.

The on/off per stand is performed by whether or not the stand is connected to a baggage bay.

We decided to leave it out of the score, as it’s difficult to appreciate what value the airline would see in having baggage services on such a small flight. Most small flights like that simply have a very easily accessible cargo hold where passengers place their luggage when they board immediately. There’s also no immediate instruction or preference of the simulation when it comes to the diff in small flights having baggage handling or not, and just a small “quirk” added as per your (the community) request so its probably best to leave it out of the score.

“It’s now possible that small stands can be without baggage services while it’s active for medium and large. Just don’t assign the small stands to a baggage bay and they keep the non baggage setup.”

Is this still true? I have small stands that are not connected to a baggage bay, but no one can check in for a flight and no one boards the small flights. 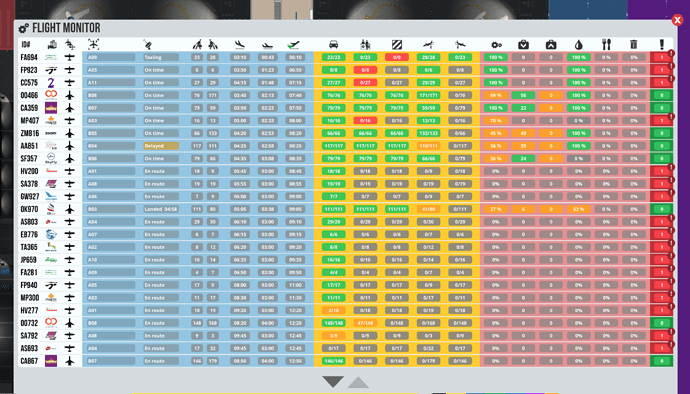 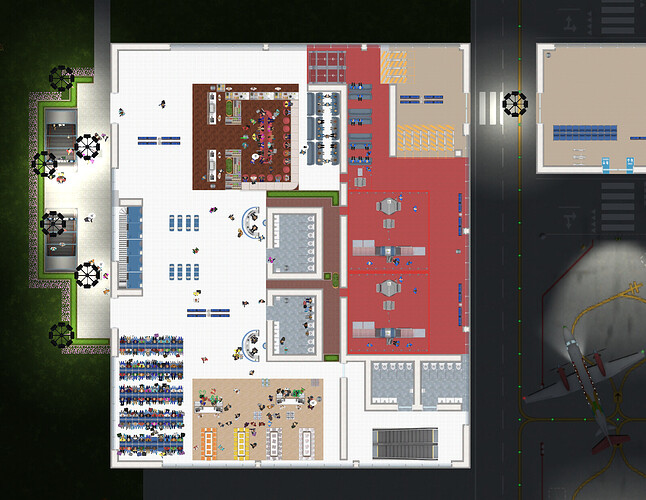 You can still run a terminal with small stands not connected to a baggage bay. The important thing is that the non-baggage stands must have small manned check-in desks for the PAX to check-in on. If you only use medium check-in desks and/or auto bag-drops with auto check-in kiosks then they will expect to check baggage also and refuse to do so if they can’t…

Thanks for the clarification!