Ive got two Baggage bays using single baggage line with tilt trays but every time I enable the baggage system no passenger service agent comes to the desk for checking in which is really weird. I think its cost ive made it wrong so ive attached the photo below. 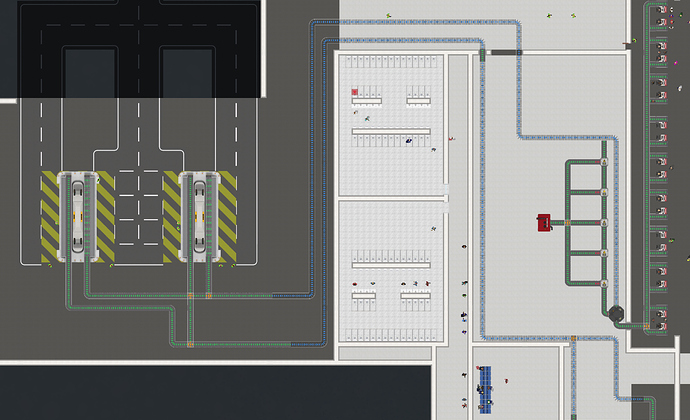 Are the stands assigned to the baggage bays? If they’re not that could be the problem because then the check in desks are not connected to a baggage bay for the stand.

Can we see a pic with zones enabled?

Yes, it is badly connected, give me a moment I will mark it on your screenshot

I don’t believe you can use a tilt tray as a junction. 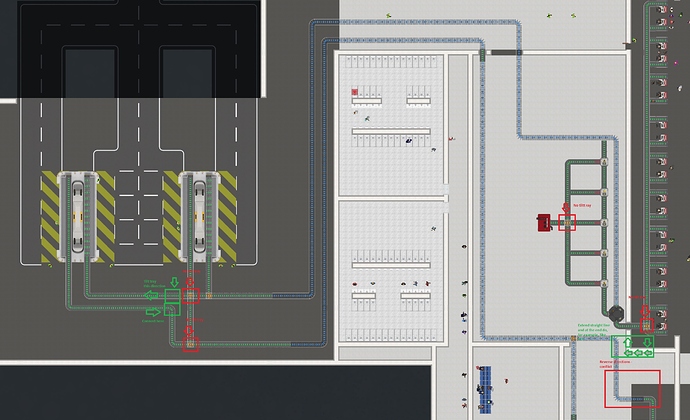 There’s nothing wrong with those. 3 of the 4 marked tilt trays are not necessary, but they still work (as long as they’re set “to destination”). The fourth one is necessary. I don’t see any problem with the conveyor belt. 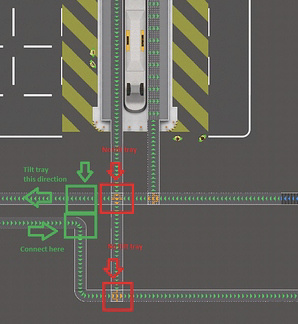 Check out my post on Belt Systems and how I show intersections joining and departing. Hope this helps

Conveyor Belt - One System (Departure and Arrival Baggage) Ever wonder how to make a streamline converter belt system where you don’t have to go up and down levels to cross departure baggage conveyor belts over/under arrival baggage conveyor belts? Well you have come to the right place. This conveyor belt system is designed for any airport and works very smoothly! Tilt Trays set to “Destination” For this system to work you must set all intersecting tilt trays “TO DESTINATION” by right click…

you cannot put a tilt try at a 4 way intersection

I’ve done that before and it works (at least about 2 months ago). You can route baggage from the left side to the right side of the tilt tray without any problem.

But why would you? I tend to err on the side of less opportunity for errors, keep all things moving in the same direction toward a goal, linearly instead of in a tree like approach. His baggage security scanners are a great example. There’s lots of wasted space for one, but why have them come back to central area instead of all dumping onto a belt leading to the baggage destroyer.

ill fix it and let u know and post the updated screenshot. thanks everyone for the help

got it working you guys help

This is the most efficient version I have come up with. Keeps the belt time/distance the least possible. I use the high speed belts wherever possible, certainly more expensive, but bags won’t get hung up meandering through the security check. You can build it with the belts longer and slower to see how often the security scanners create false positive security flags. Those flags then flow to the security viewing tier three, and more often than not, the bags flow through it back onto the belt system than they do flowing to the exploder.

It seems to actually be a pretty solid and accurate portrayal of the myth of a truly secure airport.

Ok I will try that. Thanks