For this system to work you must set all intersecting tilt trays “TO DESTINATION” by right clicking on the tilt trays… All the other options when right clicking the tilt tray is for dividing/splitting the traffic into 2-3 lanes (for example if you want to evenly split traffic for multiple scanning stations - see my 2nd post from this thread).

The main idea is to set up parallel belts running in both direction (like a two lane highway). Then you use tilt trays for baggage joining the parallel going in one direction and turn it around to go in the other direction. I will show a few different examples.

Here is an example of how to set up the connection between a row of baggage bays and the parallel two way belt lanes. You can set it up for any direction (yes UK Folks can set it up so the baggages moves on the wrong side of the lane 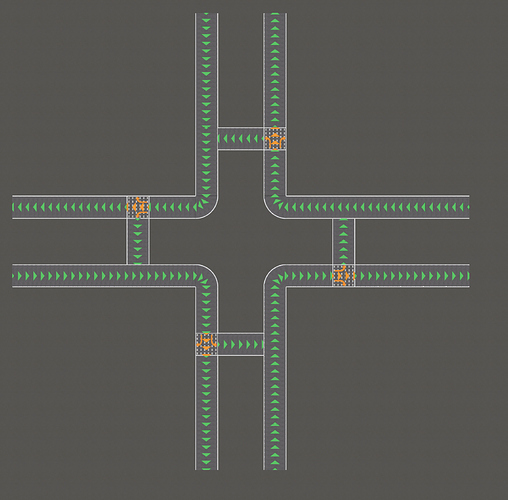 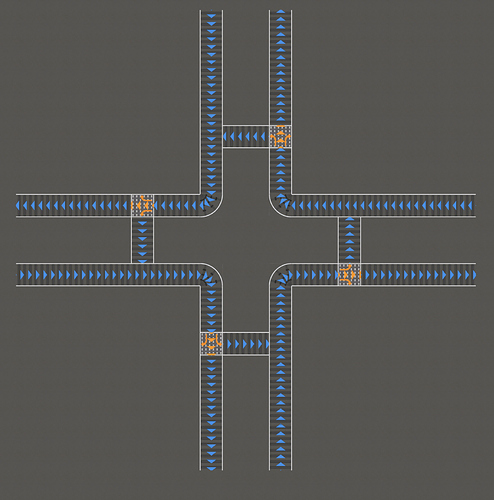 3. Joining and Departing Baggage (from checkin/scanning & to baggage claim etc…)

As you can see, you can have checked and scanned baggage join and depart the two lane system anywhere as well as baggage going to their passengers at the baggage claim join and departing. anywhere. All you have to do is add a tilt trip before or after to send the baggage in the opposite direction if needed after joining one of the directions.

Joining a parallel does not need a tilt tray until after it joins. Add a tilt try a few tiles down after joining to turn it around to go in the other direction. 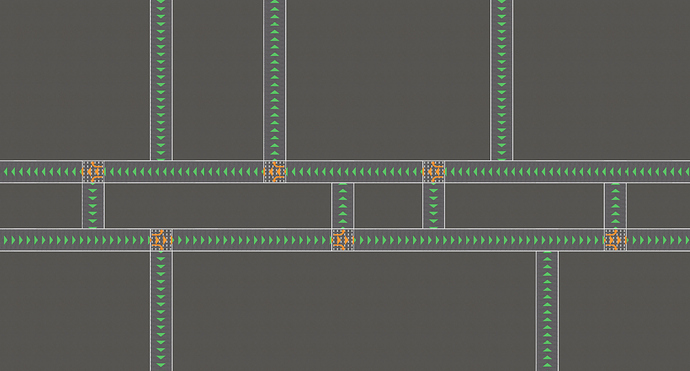 If you know you are going to be expanding your terminal and adding more Baggage Bays or Claims… Just add a Titl tray where you know this expansion is going to occur. As you can see here. There are two available options to expand to the right and up for whatever reason. Check in’s won’t necessarily need this as they will most likely just be joining the the system and not departing.

Interesting.
That means also as long as there is no max. capacity for luggage per minute or hour, incoming and outgoing luggage can use the same scanning devices and you save money. Haven’t tried that yet.

Hmmm… I don’t usually have my arriving baggage scanned so I never though about that. I would assume this would be possible (to have the same scanning system used for arriving and departing baggage). Let us know if it works when you try and I will add it to the benefit section and maybe an example after if you send a picture!!

Also, since all luggage is on one system you can just add another scanning system so you have 2 or more as your airport gets bigger and the luggage capacity increases…and just use the “direction option” with the tilt trays to split the the traffic between multiple scanning stations … This would be achieved by right clicking the tilt try and selecting either right/left, forward/right. or forward/left (for those who don’t know)… However Ive never had 1 scanning station over loaded before. They can handle a lot!

So something like this… All baggage get to Scanning stations via one belt. The Tilt Tray in upper left hand side before the scanners will be selected to “Forward & Left” to evenly split the baggage traffic between the 2 Scanning stations. 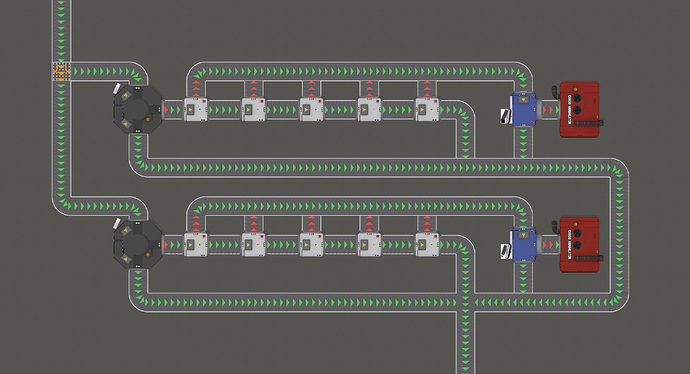 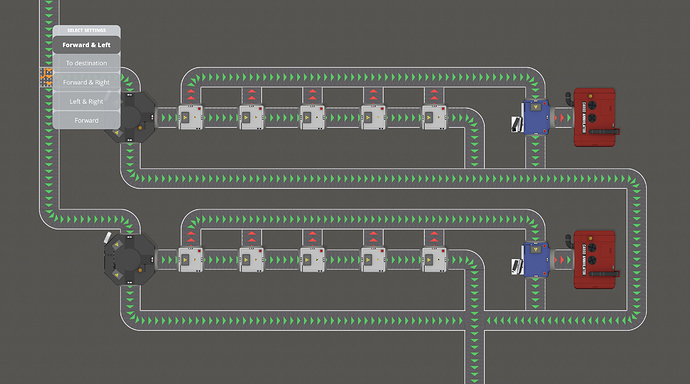 Update: However, Baggage arriving at the airport by plane might not go to the scanning stations. I think you have to have a scanning station direct line from checkin and direct line from baggage bay for it to go though scanning otherwise I think the baggage might just go directly to the baggage bay from check and from baggage bay directly to baggage claim. I always have Checkin baggage go directly scanning first before joining the parallel network so I would assume this would have to be the case for arriving baggage too. But let us know either way…

Total noob question, but what is the purpose/advantage to scanning arriving baggage?

I have never had arriving baggage be sent to scanners myself. But someone or I guess some do? Someone just brought up the question of arriving baggage also going to the same scanners using this one belt system.

The post I made was just about using the same belts for arriving and departing (so they are ALL connected) so you don’t have to go over or under other belts if they are separate systems. But I did not say arriving baggage should go to scanners. I just wanted to show others how your have all the conveyor belts connected for both arrival and departing baggage. As it took me a long time to figure out that I could make an easier belt system this way. Before I would have so many one way belts and I would keep departure baggage one one and arrival one another and would have to go up and over or down and below other belts as they crossed paths. This post shows how to avoid that.

Again. Scanning arriving baggage is not something I have every done as I have never thought about doing it myself or never saw a reason to do it as it should have been scanned at the departing airport. So I see no purpose in scanning arriving baggage and cannot answer your question, as I also don’t now if this is ever done IRL.

Is there a maximum capacity bags the scanners can process? I assume that machines can handle more bags then humans can, so I tried a setup with to security employees and one set of machines. ( though I still get multiple fines a day because of the bags with dangerous content that gets loaded

yeah, I’m not sure if there is a maximum capacity. when I made one security scanning system I was fine, but then I made another one for another line and I was getting fines after adding a second one. so not sure if one of them was hitting capacity or if it was a bug.

Reading second post. For safety you should add a Manuel at the merge point just in case and make the baggage go to the start to go through again