Several entrance and many exit

thank you a lot

sorry for the spelling i’m french 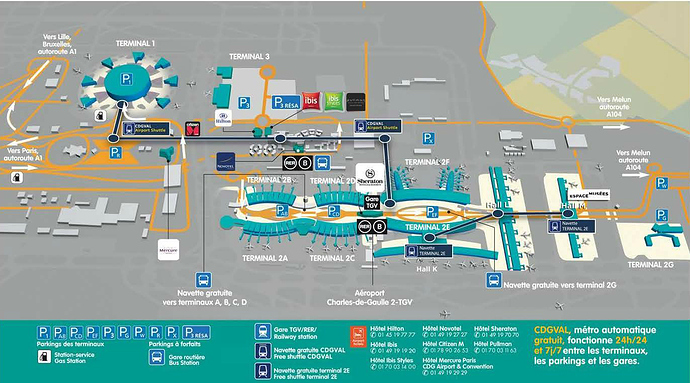 Don’t think multiple terminals are actually a thing yet. It probably depends where the bus drops the people and the shortest path to their check-in desk. So in theory it would be feasible to have two doors that serve different check in areas.

I would totally back this on Kickstarter.

Should try this when the game comes out.
2 terminals, each with its own check in gates, security, secure zones, gates and baggage claim.
Will be a good test of the path finding algorithm.

The worst I forsee at the moment is that they might check in at the closest desks, and may come out of that terminal, and go to the other terminal to go through security and to the departure gate.

If however, both terminals have their own baggage loading unloading zones and the service roads do not connect between the terminals, that may strain the algorithm a little more

You can have separate check-in terminals, but the secure area must be the same. The passengers will move to the assigned check-in desk and then find the closest security checkpoint. If you are to build separate secure areas, the passengers would not know which one to go to and they will not find their assigned departure gate if they happen to go through the wrong one.

Not possible for it to be destination driven algorithm, not a step by step? I dont know the exact terms for it, but example below:
Destination driven: Need to get to gate X, therfore need to enter secure area Y, therfore need to go through security Z. No problem
Step by step: Need to check in, therefore choose closest check in. Then need to go through security, therefore choose closest security. Then need to go to gate X, but stuck because in wrong secure zone. Gate is in the other zone.

Add baggage into this, and program has to decide the final destination of baggage and passenger, and work backwards from there

Yes, it could be possible but it is more of a design question. The less the passenger and object knows about their surrounding, the better the code can be maintained and there are less rooms for errors. This requires storing a lot of information in the passenger models and object which must be correctly saved and loaded. Also if any changes to the paths occur such as a removed object or blocked path, the system must adapt and correct. It is all very much possible and we might go for it later on but now we want the basics to work.

In summary we have a lot of ideas on how to improve this area, which we will look into after initial release (kind of the standard answer).

So as built we kind of can have multiple terminals, provided they all share the same security area (which presumably would be as little as a corridor). This is akin to some real life airports such as Dublin, Birmingham (historically), Amsterdam (it could be argued) and I’m sure many others.

Exactly, basically passengers are only allowed to plot paths within their current area. When they arrive at the airport, they can plot in the “open” area meaning non secure terminal + sidewalks + crosswalks. When they have transitioned to the secure area, they are limited to plotting within that area. So as long as the secure area is connected, the current system should be able to handle that.

Could you implement a simple check that if they cannot path to gate they search for other security areas and try to get to them? Wouldn’t solve the main issue but it would make it less of a “bug” that they get stuck in one security area over the other.

The thing is that the gate is not assigned until the aircraft has landed so there is currently no way for them to know that. There is no time to start making these changes now, yesterday, I was only going to add the world size to the game saves so that we can have saves with different world sizes. I thought it would take less than 1 hour because it is simply a X and Y value to serialize. It ended up taking 5 hours due to many systems being dependent on the grid size being correctly loaded. This is how software development works and therefore we are not making any major changes at this point as it will jeopardize the release.

A better system could be assigning Gates to planes when accepting contracts. I really didn’t get how the current Flight planning panel works. I was seriously expecting to assign planes to gates.

But yes we want the game for now. Waited too long for it.

Was about to post just that. I also assumed we would assign flights to the gates. Now it sounds like not only would this make sense for us players, but could solve other code issues on the backend.

So what would happen if a flight is delayed while boarding for example and the gate is not available for the next flight? Assigning gates on arrival gives you needed flexibility

In that event maybe a backup gate gets assigned and passengers are told to move to new gate. Happens IRL this way as well. If nothing is avail maybe the plane circles a while, and if too long lands elsewhere and you get a major reputation hit with airline.

, but they had a lot of problems due to assigning gates, in case of a delay the following plane assigned to that gate wouldn’t land (cancelling the flight).
Recently they launched a patch which assigns standby gates. I haven’t tried it so I don’t know if you need to assign a specific gate for this purpose or if it considers any free gate as a standby gate. IRL it works kind of this way, so I agree that gate assigning should be somewhat of a priority (if not now, after release).

Yea that is true, the other game did recently add backup gates, but I also didn’t get to trying it out.

One thing that will add to the challenge is assigning gates. If your airport isn’t efficient enough to get planes off on time, it will cause issues downstream. Remember we set the times they land. If you are stacking flights too close together it’s ultimately on you that the problem is happening. Maybe you get 30 minutes past the time the next flight lands, if it’s gate isnt free (or an alternate gate) then, it diverts and you get dinged for a cancel.

Gate assigning adds a great challenge in many perspectives. When connecting flights are added it will be crucial to have same airline flights together (or even partner airlines if we get to have this). If we get to have different staff for different airlines same thing, imagine them walking all across the terminal every time a plane lands.

So what would happen if a flight is delayed while boarding for example and the gate is not available for the next flight? Assigning gates on arrival gives you needed flexibility

This is a very important design aspect that today sor of overrules the simplicity of assigning flights to gates. While that might make more sense and give the player the feeling of having a more direct control, delays can cause quite stupid queue build-ups. If that occurs the player must then be alerted so that they can change the gate but that in turn kind of makes the gate assigning procedure sort of unnecessary. Having it automated as it is now makes stuff less interdependent and more flexible.

It’s always also important to step back and look at the game we’re building. Is it Airport CEO or Air Traffic Controller Simulator 2017? While the concept of generic rows and generic flight scheduling without assigned gates may be a bit more difficult to communicate it is a lot easier to handle from a simulation perspective and it is quite unrealistic that the CEO would be tasked with rescheduling flights.

Of course, it could also be so that hiring a COO would make it automatic. I don’t know, we’ll have to think about this one.