I’m not sure if the devs have confirmed this feature, but I think the Restricted Flight Time at night time should get removed, so that we can have aircrafts arriving/departing at that time. It’s not every airline who has flights operating at night, but if not the removal of the restriction get’s implemented, I think we should be able to have aircrafts arriving just before the Restricted Flight Time and then having them depart in the morning, so that the aircraft is staying on ground at the gate at night while the restriction is active (just like in real life, where they’re also parked in the airports (some of them at the mechanics)).

I second for this, 10PM is too early to stop flights. During the restricted time the planes can be grounded until the airspace will be opened.
I would suggest change restricted flight period to “2AM - 5AM”, it also helps to increase shop sales. Because after 11 PM they are still open though there’s no passenger at the airport.

It’s ok as restricted flight time only applies to have aircraft so the commercial ones can come and go when they want!

I think the restricted flight time makes sense if you allow the game to have purchasable items to upgrade for night time operations. But to lock out restricted hours with no ability to enable those hours at all is a bit of a mis-step.

2am to 5am is also more realistic.

Huh? I did not understand that…

The issue with having the restricted time start at 2AM is that the game day ends at midnight. So you pretty much have to end your flight schedule before midnight; this change would just allow you to have a separated block of flights from midnight to 2AM. I don’t think medium-class planes would be able to fit in that block.

Most common night time curfews are 11-06, so the ingame night time restrictions aren’t that weird. Maybe it would be an idea to have an ILS system (Instrument landing system) that you can upgrade and add to your runway. This way aircraft are able to land on some runways during night time and during bad weather. Only the bigger/more advanced aircraft can use this ILS system and therefore use the airport during night time and bad weather. This way you still have the night curfew for GA and small aircraft, but it is also possible to expand your airport later on to have night flights with bigger aircraft.

This is what I mean: 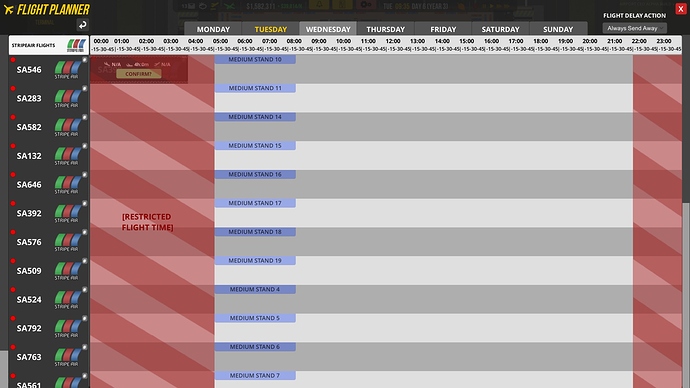