I built a finger-style airport with 2 separate terminals. One at right, one at left. The first one was the left one.

While operating the left one, i started to build 2 more runways at the right, not connected by taxiways to the first two. This is because i don’t want planes from terminal 2 go on terminal 1 runways.

As soon as i activated the new runways, planes from terminal 1 started to "fly" (as shown in the screenshot) over the terminal to try to depart from new runways. I use the exterior runways to departures and the central ones for arrivals.

Tried by restarting the game and load the save, still happening. And now planes can’t depart from anywhere

and my save is literally stuck. Just cancelled all the incoming fligths and so on.

But i still love the game hahaha 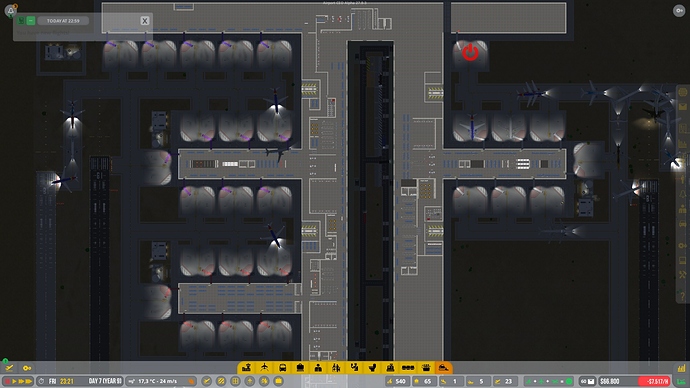 It is not suggested to build 2 completely separate terminals because game is not ready for this. Basically your passengers, your staff, your vehicles and airplanes will fail to reach their destination.

Although good news is that on current experimental branch there is an improvement that runways will be linked to connected stands so airplanes won’t land on wrong runway.

It is currently on experimental branch and if you wish, you can take a look.