No one is checking in

Why no one is checking in? Is this a bug or It just me. 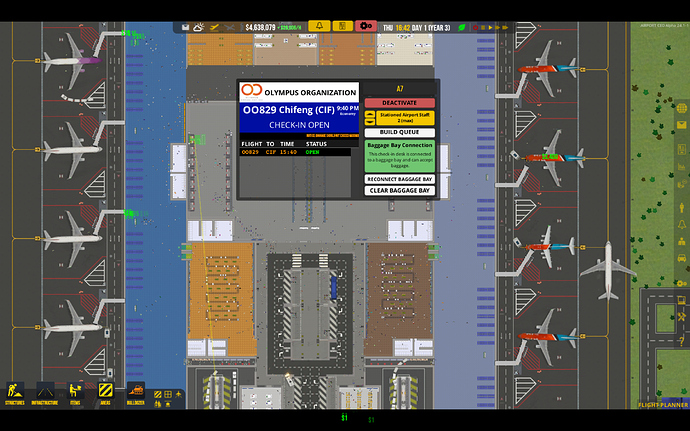 This is unfortunately a known bug!
Dev is investigating this one

Sorry for the inconvenience

Can you please submit your bug in a bug report for the Jira? The more saves we have to test our solutions on the better.

I PM’d Olof and Fredrik with a link to another save game demonstrating this bug; rather than create another duplicate Jira bug report.

EDIT: I had hundreds of pax not moving. Suddenly, they were all released. Hundreds headed for the terminal security exit.

I sent a save game to Fredrik and he kindly responded with the solution.

These solutions now mean that ALL my planes leave full. 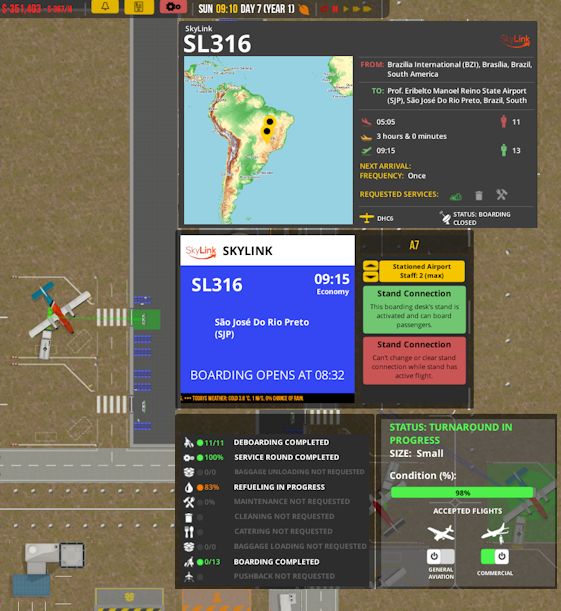 Is this a new airport? How many of the passengers of that flight checked in? If you press the boarding desk, are any passengers highlighted?

That flight is gone. I’ll look at another. Meanwhile, here’s a flight that showed Boarding Completed 0/8. It didn’t bother to wait for pax. It is scheduled to depart at 12:40. However, the current time is 12:25. 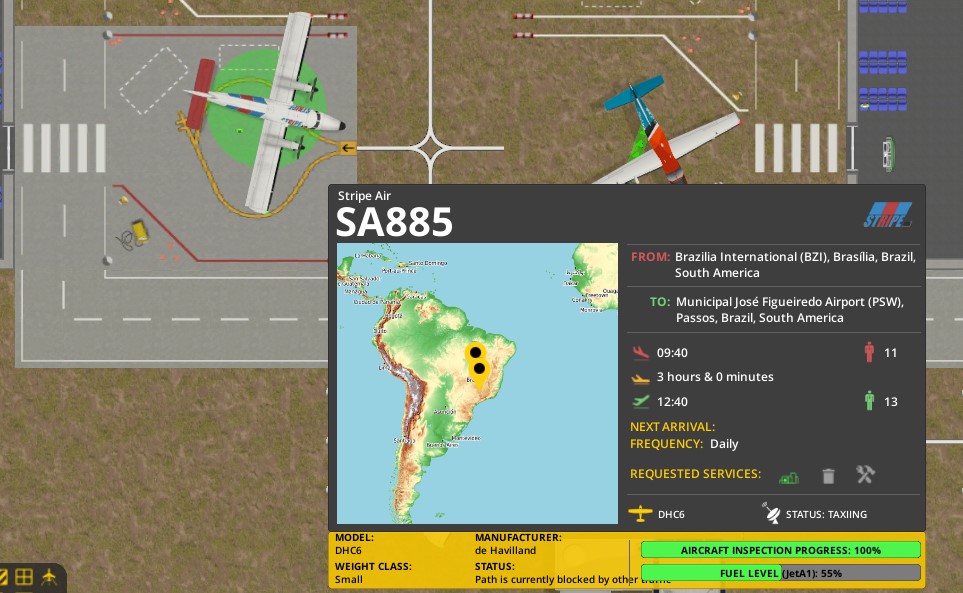 All right, but I still have the same questions as before. How many flights have you scheduled, what’s the throughput and were the passengers able to check in?

1.5 hours between flights. 4 flights during the day. there was plenty of opportunity for pax to checkin. As you can see, the flight didn’t even wait for pax; it left 15 minutes early

Can you send a few snaps of the current layout of this airport?

A different flight. There were never any pax waiting to board. I even clicked on all the pax in the terminal to determine if any were to board this flight; none were found. No Airport Staff reported to the Boarding Desk. The flight is due to depart at 17:10. It left the stand at 16:50 after completing refueling; perhaps that’s the key. Finally, the Flight Planner bar for the stand, at top of image, shows wide gaps between flights, allowing for lots of time to onboard pax. 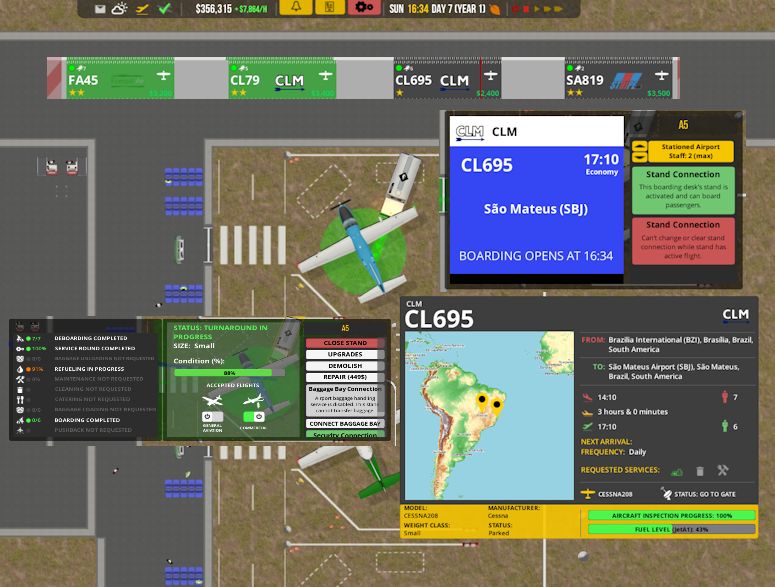 sidebar: I’ll get airport snaps in a few hours. I’m off to work.

I think we need to take a look at the save to investigate further. Can you submit it and write the number here so I can follow up.

Posted per Fredrik’s request above.

Issue is again with check in. Seems like it is too far so it manages to close again before any passenger reaches it. I have increase the accepted delay from 30 minutes to 1 hour and also set a minimum check in open time to 30 minutes. This should fix it for you.

Ok. But as I noted above and in the Jira report, before the flight departed, there were NO passengers i the terminal for that flight. I checked EVERY one. There were very few, so it was easy to do.

I appreciate the fix.

Here is my entire airport. For the nine flights, their boarding times are around 7:30am. The game clock shows 7:33. There are no pax waiting. No Airport Staff. Nobody in the terminal (the few pax you do see are leaving the terminal. Nobody at the checkin desks nor going through security. All left without passengers while indicating Boarding Completed 0/xx. As you can see, this is a very simple airport. 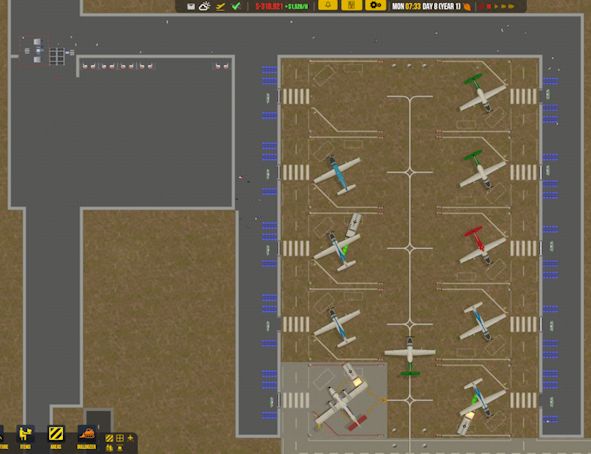 EDIT: about an hour later, one flight actually had pax waiting to board. They boarded, and were counted correctly.

I could be totally wrong here but I noticed none of the flights had baggage unloaded and loaded but the photo with the check in shows it linked to a baggage bay. Are the stands linked to the same baggage bay? If not could this be causing the check in and therefore boarding process to be broken?

vers 25.1 still has not fixed the Boarding Completed 0/xx passenger problem. The current time is 19:28 in the image. Flight not due to leave until 21:15. There were no passengers waiting to board. No passengers in terminal for this flight. I have two medium security checkpoints (both have no pax in queue) and 5 checkin desks (nobody in queue), so that is not the problem. About two minutes after this image, the plane departed. 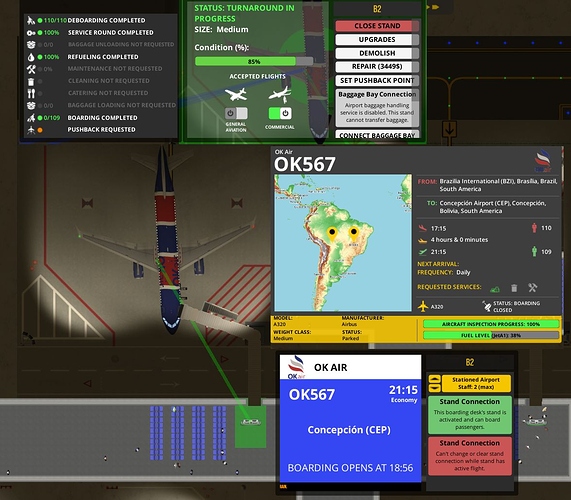