in my current game I have some modded airline from the workshop. My Airport is now 5 Star for a while and has every service turned on but a lot of the modded airlines never show up with a contract.
Some modded airlines show up… but even newer mods doesn’t.
Is there an issue or something else I missed?

PS: I should be not over the mod-maximum and I’m nearly sure that the mods are loaded in the beginning because the number grew when I get new ones…

Which mods are you using? Are you just not getting the master contract to sign or is it something else?

Using a lot of Mods (but still under the limit). But I have a screenshot for example.
From all this mods, just Air Greenland gives me my master contract. all the others don’t.

Yes, exactly, I never get the Master Contract. 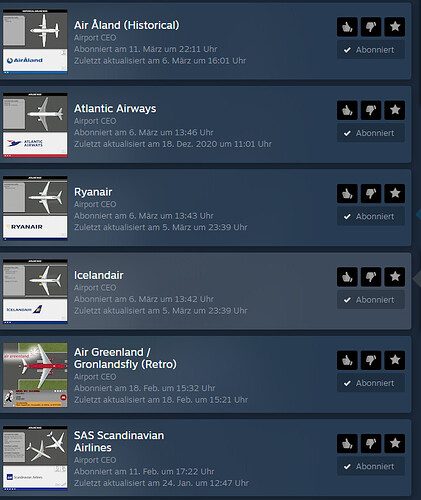 Have you enabled them in-game? Thought the mod menu.

Yeah, all enabled and I’m pretty sure, when the game loads the mod before the world, that they are in the Numbers (Showing me 119).
Just don’t appear in the game…

Could it be that your airport is low rated I.E like 2-3 stars and the airlines need 4-5 to be offered? That’s the situation i had anyway when experiencing what you do.
I do know for a fact, that the SAS airline needs a 5 start rating.

You have two options, either play and get the airport to a better rating. Or go into the files and change at what rating the airline should be offered. (there is a few steps to this but not that hard)

Nope, it is 5-Star-rated with all services activated. Other 5-Star-Airlines appeared normally.

Then sorry, i have no ideas.

Do you have some local mods installed, too ?
There must be a typo in a json-file.

no, no local mods. Some of the default business are turned off, but that shouldn’t be the problem, I would think…

Well I know the maker of most of those shown in the image so I’m thinking it’s not the mods. Have you tried verifying your game integrity in Steam?

Are you subscribed to a modpack containing the same airlines as in the standalone mods?
Anything called ACEOMM?

Be also aware that activating such a number of mods requires a looot of RAM.

only Modpack I have is integrity the “Real Franchises”. the Rest are all stand-alones.
I let steam check the folder and there were no issues.

thank you all for your ideas/tips by the way.

oh, ghat big real franchise mod pack?
then you get over the lkmkt you mentioned, no matter if activated or not…

try to unsubscribe that and test again…
if you like a smaller real business thing, check out one of those scountry packs like japan, australia, switzerland or venezuela

There is another similar report on Steam for this.
Can you switch to the Experimental mode and check if it works there? Maybe there is an issue in the Default version.

I am on experimental, should habe mentioned that, sorry.
Will deactivate the Business-Mod and see if that helps

Ok strange. Best is to start with all Default active any then maybe only one mod to see if it works then.

When you unsubscribe mods, check also if the folders get removed at your Steam directory on Windows:
\steamapps\workshop\content[game number]

Every mod creates a folder there. This one should get removed atomatically when you unsubscribe.

If it’s empty already but you subscribed to tons of mods, then you may have a sync problem.

ok, after removing the business mod I saw some more of the airlines, but not all of them.
Seems that there are still to much businesses. But right now it’s just 96 (when loading into the game).
but I think, this is the ongoing problem…

as i mentioned, thw number of loading is an indicator tobthe issue, but it also counts subscribed mods that are not activated…

I deleted some mods which were relativly old and hadn’t been updated in a while.
Since then I can see every contract in the game.
Is there a possibility, than some Airline-Mods block some others?