I have nearly finished the tutorial as I am at the stage of 'Build A Basic Conveyor Belt System' on international airport. But I have a problem

I am currently on ‘build a basic conveyor belt system’ in the international airport section of the tutorial. I have two steps left of this section which are ‘connect check-in desk to baggage bay’ and ‘connect stand to baggage bay’. So I follow the instructions however, when I complete them, it does not seem to tick them off the list. I have no idea why this happens so I was wandering if anyone could help me? This would be much appreciated.

I just noted that this was a bug in the tutorial. Can you try connect the stand to baggage bay and see if they clear?

sorry it still does not work

Anyway i’m sorry but I must go now as i must go to sleep however I will continue to talk to you in the morning - British time.

I have continued to try to make this work however it still does not sorry. But thanks anyway. p.s - also on one of my medium stands, it says that I can not connect to baggage bay because it has scheduled flights whereas there are no flights at all planned for the whole week. Again I hope you can help me as I would much like to proceed through the tutorial and finish it. Thank you.

A fix was applied on the expermintal branch. Try enable that using this guide:

Thank you very much. You have been lots of help for me.

But it still does not work?

Which step does not work?

All of the steps now work but it still says that one of my stands have scheduled flights and so I can not connect it to my baggage stand - I do not have any scheduled at all.

I have had several bugs like this. My only solution was to remove the stand and build a new one. In some cases the stand became free after a while. But its rare. 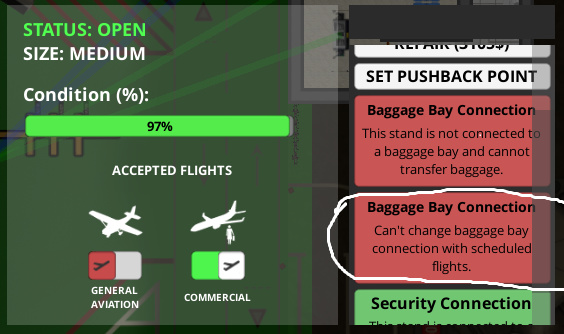 It says this when I have no flights scheduled for the whole week.

Delete it and build a new

It just a bit of a waste of money though

And I don’t have much money D:

. I hope they fix the bug soon. But as far as I know its the only solution at moment…

The medium stands are 150,000 each. If someone has 2 or 4 of them that is a damn expensive fix. After all this time this one really needs nailing properly. Many folks are doing as the tutorials appear to suggest and adding the baggage system later, then encountering this bug and if not in Sandbox mode it’s a lot of money to find. A real world airport would not need to rip out all the stands to add baggage to them, especially when it just gets loaded on the trucks and manually added to the belts