How to unlock all world tiles on Mac?

My airport is getting big and I need to unlock the map tiles. I know how to do it on windows but not on Mac OS X Sierra. Could anyone advise?

Can you not edit .json files on a Mac?

Not sure which ones to edit. I’ve gone through most of them to find the write area of code but still can’t find.

[Tutorial] How to expand the playing area Community content

Hello, fellow CEOs! I saw people asking about this and wanting to do this, so I created a video tutorial on how to do it. But first, I would like to note, that this is not officially supported by the developers and is at your own risk. Neither I nor the developers are responsible for any bugs or lag you might encounter. I didn’t notice any performance difference with the area itself being bigger, but you can, of course, get more stuff in a bigger area which can lead to performance issues. So, …

On Mac, the folders are laid out differently. There’s no ‘saves’ folder anywhere as far as I can see. 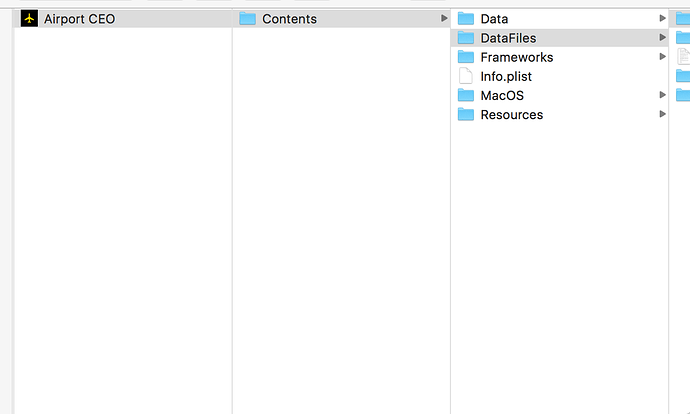 Im not sure where they might be on a mac, but maybe try a search for gamedata.json.

Darn. I know on pc, i had to start the search on my c: drive level the first time I was looking and getting some “financial donations” to my airport.

Edit: I wonder if the MAC places these files as a hidden file so it "can’t " find them.

F9 and type in motherlode to get 500k i think every time you do that.

Thats where the bug reporting form says they are located

On macOS press Shift + Command + G and input the following to the input box:
Save file: ~/Library/Application Support/unity.Apoapsis Studios.Airport CEO/Saves

Yep, found it! Thank you so much!

Yes I know. Auto correct from my phone. Thanks.

Our phones must think we’re all network support types. My work phone does the same thing.

Which in turn is technically wrong as well since any networking hardware has a MAC Adress not only ethernet cards.

I was using the alternative form to distinguish MAC (hardware address) from Mac (diminutive for Macintosh), not giving a strict definition.

But, since you brought it up, It is most definitely correct usage. “Ethernet Address” is the most common and accepted alternate term for MAC Address, and recognized by IT and networking professionals for over 40 years in everyday usage. An Ethernet address is the MAC address, though most other IEEE 802 equipment including WiFi adapters have one as well.