Hello next CEOs,
do you know if there will be High- and Low-Seasons (Summer / Winter Holidays) In the HighSeason you are focussed on managing the Passengers and all airplanes and in the Low Season you can repair, upgrade and manage your Airport, find Sponsors etc.

Hi there!
At the moment, the traffic through your airport (flights and passengers) is entirely dependent on you (as CEO) signing contracts with airlines.
Each contract mentions a number of flights that you need to complete within a certain period to complete the contract. See below: 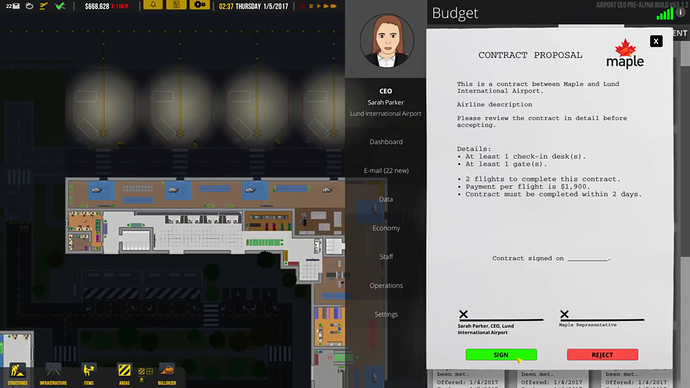 yazaXcf.jpg1920×1080 321 KB
If you do, then you get a completion bonus, and if not, then you get a penalty(in addition, you get paid money per flight, landing fees, parking fees and passenger handling fees).

Essentially, if you keep signing a bucket load of contracts on a regular basis, you always have a High season, and if you sign very few contracts, it is always low season. So it is entirely in your hands.

In the future, we might see options where there are more contracts available at certain times of year as compared to other times of the year.
Or during certain times, a given type of contract may require larger number of planes to be handled in the given time (simulating a holiday rush) and other time of year, same type of contract may require fewer planes to be handled in the same time span.

Thank you @vikhattangady. And what do you think about Contract-Negotiations? Everyone who loves Tycoon-Games likes the pressure. Do you negotiate good you will paid better per flight or higher landing fees… do you desire more and more perhaps the airline terminate the negotiations.

Personally, I am quite bad at negotiations (or the more derogatory term we normally use, bargaining). So with that feature, it would be highly probable for me to be “cheated out” of good deals. So I personally would prefer a fixed rate system with a mix of ‘high risk high reward’, ‘low risk low reward’, ‘low risk high reward’, etc and get to choose a good deal (rather than ‘creating’ one through negotiations).

But in a general sense and for realism, I can see why people would like to see negotiations in the game. It would be a good feature for the game, but I would suck at it.

And I guess you can always change the airport fees (landing, passenger, etc) around and watch the effects unfold.

I believe the contract negotiations will be kind of as you said. You get 3 options i believe

If that is the way it is, then that is pretty much similar to what the current system is and in line with what I am comfortable with.
When people talk about contract negotiations, i picture something like this:
You receive a contract with below details:

The first part is fixed, but 2nd part is negotiable. On the bottom, you choose one of the options. If you accept or reject, same as current system. The ‘fun part’, if you choose re-negotiate, you would get to enter your own values (manually or slider bar) and send the revised contract back to the airline. Say you dropped the per flight payment to 1900, but bumped up passenger handling to 10, and made advance payment 7k and compensated by setting completion payment to 3k. Then you send this to the airline and now it is the AI’s turn.
The airline (i.e. AI) can choose to accept, reject or re-negotiate. If they accept or reject, same as current system. If they choose to renegotiate, they may change the values around a bit and send you a revised proposal. And now we are back to tye beginning and it is your turn again.

Basically, whenever either the Player or the AI accepts or rejects a contract, thats the end of that. As long as both keep re-negotiating, it keeps going back and forth.

Loved the idea. This makes it possible to also re negotiate some requirements. If the airline wants something that is not available in your airport, you could lower your price and ask that they remove some requirement. This will be really useful in case you don’t have money to invest at the moment but need the contract.

This would be really really great!! What can I do to make this happen @Fredrik & @Olof ?

Will it be possible to get contracts that are longer than just 2 or 4 days? I realise the timescale is different but it seems pretty onerous to keep rescheduling contracts when in reality airlines would sign contracts much longer than that? E.g. an airline would most certainly keep multiple daily flights from JFK to LAX year round irrespective of season. Will those types of contracts be implemented too?

I agree, at least for smaller airlines. Maybe a big one wants a short testing period, if you do good theu give a much longer contract.

I agree with the option, but IMHO, minimum flights and minimum days should be connected, and that we can negotiate on the days to be completed part, up to maximum 36 days.

That is to say, taking example from the gameplay vid 3, on signing the contract with Maple, you get 2 flights generated with information on passengers, point of origin, destination, type of aircraft, flight numbers, etc. This data might be hard coded that when you accept this contract, it gives you these 2 flights or it gives you 2 flights with randomly generated data.
Point being, if that 2 flights needs to change to 4 as part of negotiation, not sure what changes are required at the programming level to handle that.
Although the dev do stress on having very agile coding, easily able to reconfigure to meet the players expectations.

Yes, it’s a bit tricky between having flexible duration. Another possible way (don’t know if this is suggested), is if airline reputation is built on per airline basis (as opposed to overall basis). That way, if your reputation with airline X is great, you can be offered longer duration contracts, which will add stability to your bottom line.

On a side note, airline reputation should actually affect the negotiation willingness. If you have a good reputation, you can arm-twist the airlines more.

Side note, funny how such profound contract negotiation discussion is going on in a thread with a completely different name.

So basically the usual around here

Yes… Even I feel signing a contract for ‘2 flights’ isn’t much realistic… Its good at startup of the airport. But when it grows… Like 25 gates… Then we would srsly want a longer contracts for like 12 flights…

Wait… 1 cycle in-game is 1 season right?? @pderuiter (U may know the answer

I’m flattered by your confidence but alas, i do not know the answer to that one

I’m not sure what a cycle would be? I know there will be seasons. I believe each season is an ingame week.

Did the dev log a couple ago (which caused much debate) say a season was 3 days as a year was going to be 12 in game days with a day taking approx 40 mins of real time!

As @Stu mentioned, I recall only 3 days a season with total of four seasons a year, which means 12 days a year.

TBH, isn’t this weird only having 2 days to finish a contract?