Flight information boards are one of the key features to which help with the smooth running of any airport. I appreciate implementing them will likely have to wait until other aspects of the game are more polished, however, I think there is scope for them to have a significant impact on the game.

In the early stages of the game, your fledgling airport would be able to cope without flight information boards as passengers can get the information they need from the check in desk. However, when the airport starts to grow and their are many different flights and gates passengers will start to get confused and annoyed if they are not kept informed. If your airport does not have flight information boards, this could lead to your information desks being inundated with passengers meaning they are unable to cope. Similarly, if you only have one board, this could lead to passengers congregating in that one area causing a bottleneck with other passengers unable to pass through. Having one big one and lots of smaller ones dotted around the departure lounge would reduce the need for passengers to all stand around to be kept updated.

There is also scope to implement the planned procurement process with this idea. When your airport starts to expand you could purchase flight information boards to keep passengers updated and keep them happy. The basic screen could break down frequently / not fulfill passengers needs / provide enough information. This could be upgraded to a screen with more accurate real time information to assist with any last minute gate changes (if implemented in the game). The smaller boards could then be purchased an dotted around the airport to reduce people gathering around one screen. Maybe later on in the game if your airport has become massive you could also purchase a smartphone app for your customers. This could reduce the need for 15-20% of passengers to gather around a screen as they are frequent flyers and have downloaded the app.

In summary, if you have no flight information boards, it is chaos in your terminal. If you have basic ones it is better but creates bottlenecks of passengers gathering around. An example of having information boards but not using them to their full potential is London Euston train station. The train times are all posted on one big board but the platform isn’t announced until the train is a few minutes from departing causing everyone to stand around the screens and then rush to platforms. It ends up looking something a little like this…

Hey Scott, Nice suggestion.
Linking this topic, because it started the same idea, albeit not so elaborate as you

Hi dev’s! I’m pretty sure we will see some kind of Flight Information Display Systems in the game with departures/arrivals as well as check-in and gate monitors. Have you shown a glimpse of this in previous devlog’s already? Will there be scenario’s where a flight requires a gate change when for example the previous plane is delayed and thus still occupying the scheduled gate? Do we have the management over gate assignments and the ability to make changes on the fly before a plane lands ? Havi…

Thanks pderuiter. I didn’t know how to link it!

I think that info boards have been implemented already. In the second video there are new objects by the queues that look like info boards from the top.

Yes, but this post details what AI implications this could have

No problem, It’s good to keep people on their toes:)

You are right Stu. I hadn’t noticed these until you mentioned them.

I might have watched that video a few too many times! I’ve certainly stood in the scrum at Euston wait to join a sprint to a train and can see how the boards aren’t used right

I think this can supplement my original comment in the minor suggestions forum, although I withdrew the part about making every signpost

Good call bigbigcheese. Would add a level of reward for spending an extra 10-15 minutes in terminal design making things flow much better. Many tycoon / management games in the past have been too focused on the arcade style of play. Thankfully the devs seem to be striking a good balance between simulation and game play with the right amount of micromanagement options.

How about implementing Solari boards for the arrival screens. For those that don’t know what that is, it is the old style (70’s and 80’s) flight arrival and departure screens. There were individual flaps for th letters and cities and looked so cool when the whole board was in motion.

@MayorQuimby I think it won’t make sense since game is 2D. But maybe its sound can be implemented to game.

Solari boards (thanks, didn’t know it was called like that) are indeed really cool, but difficult to implement in a 2D game! I agree that a simple 2D visual could be implemented together with the sound.

Brussels Airport still uses a Solari board with some digital displays for the airline logo and it really looks gorgeous! 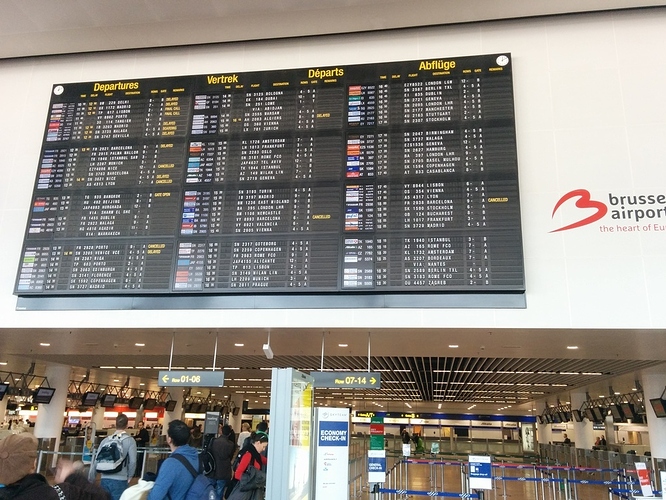 It might have some odd nuances about it but I think it’d be more interesting to add split flap than LCD displays. From the top down it can have displays that flip over and cause a blurring effect on the front as the split flaps change position which, when accompanied by the appropriate sound effects, could be incredibly immersive. And then they fail all the time and you keep having to repair them so eventually you upgrade to LCD