After reading the Extend runways post after an extended period away (House move), I’d like to suggest that runways should be able to be extendable between the preset sizes but also in the same way as it was.

The reason being (see image) I want to implement a staggered entry point when I have de-icing operations in use (spacing etc) and I’ve had to move the runway to the de-icing point rather than my “normal” holding point. It would also potentially help with high-density operations as you could have more than 1 large aircraft holding on the same side of the runway. 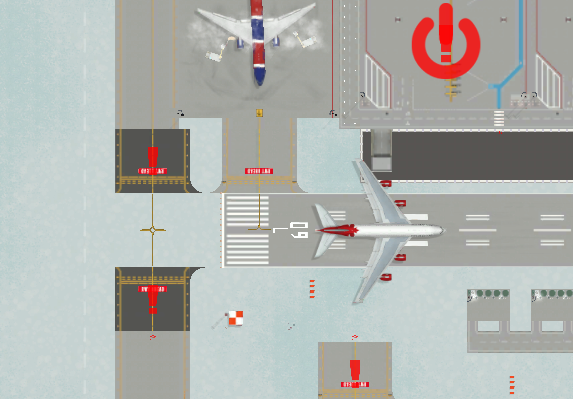 I kind of agree because runways around the world vary in sizes, some are long and some very long. However, I don’t see devs adding it anytime soon because it’s not neccesarily needed for the game in this point. Mayeb they could add like 2 longer variants for instance.

I don’t see devs adding it anytime soon because it’s not neccesarily needed for the game in this point. Mayeb they could add like 2 longer variants for instance

They mentioned somewhere that if enough people wanted it back, they would (attempt) to bring it back.

I miss extending runways too, although having larger fixed sized ones could work for me as well.

It was a mistake to take it away.
I still think it’s a design bug.
I want it back, not necessarily exact as it was (extending by some length until it is enough), but rather up-/downgrade the runway to the next/previous length (and width)

I think from a gameplay perspective, extending runways or at least converting between different sizes is needed. It seems weird to shutdown an airport to bulldoze and rebuild a bigger runway rather than extend/widen the existing one in place.

I stopped playing, though I’m still reading in the forum from time to time. The change for the fixed length runways is one reason for that to happen. I got dissapointed by the devs.

It’s no believable airport, if runways are that short … much shorter than the apron in size. It’s an immersion killer for me.

Lengthening the runway seems logically (not necessarily coding-wise) an easy enough thing (small upgrading to medium). Widening the runway (medium to large) seems to me a bit more difficult given the fact that you would need to move runway entry/exit points to achieve that (would also need to change the taxiway paths to account for the moved entry/exits).

It’s no believable airport, if runways are that short … much shorter than the apron in size. It’s an immersion killer for me.

This? And every structure on earth is exactly north/south or east-west oriented does not kill the immersion?

I do want to be able to upgrade a small runway to medium and downgrade a medium to small. And an upgrade called displaced threshold. for runway entry on the end. As for having a runway as long as your terminal:

The advantage is not only extra capacity when needed, but they’re also in different directions so i can pretend the wind to shift and open the other end while closing one end.

No it doesn’t, though I’m still hoping for smoother diagonal building. Building rectangular is common. Runways that short aren’t. It’s a huge mismatch in scale.

In real life I agree

This is a game and space was limited in this Sandbox airport to see new features.

I’d hate having things that close as I’m sure that somewhere down the line a runway incursion would occur hopefully with no loss of life!

Then again it’s more realistic as airports today do it instead of just demolishing it and just starting from scratch. Airports instead use the money to widen and lengthen their runways to meet the airport’s needs.

I miss longer runways soooooo much. Hoping with expanded map we get bigger ones too?

Maybe we could make a new runway that, in order to fully operate an international airport safely we need to add a large disaster runway. This runway would feature ILS systems, papi lights, guidance lights, and EMAS.

This runway would of course be longer and have more features. I highly doubt the re-entry of the old runway expansions, but as disasters are coming along in the ACEO this runway would be cool to have.

Of course this is not a likely situation, but something that will happen overtime, or if you are lacking in any safety precautions.