Thinking far out into the future for ACEO and where development may lead, I was wondering if it would be conceivable to add in multiplayer support. The idea: on a particular server, a bunch of players could build their airports as usual - across the globe - and then fly to them. It is essentially a streamlined way to share creations, while also expanding the game’s scope a bit to make it feel like a more live-in world.

Another option for multiplayer support could include allowing players to work on the same airport together, though I realize that may not be as practical or useful.

As for the flying between airports system, that’s a bit more complicated unless the “flight” portion of that system is just a cut scene or skipped altogether. My ambitious and ultimate idea would include the ability for players to actually FLY their plane from one destination to another. This is certainly easier said than done. The graphics and perspective wouldn’t change for this, in my mind. We’d still have the top-down view while giving players manual control over a plane of their choice.

Clearly that’s a lofty idea and it wouldn’t be easier to simply build a world for people to fly around in. Maybe the scale could shift within different servers, say just covering a single country or region instead of the entire world. Like just Europe, or even smaller and say just Germany, or the U.S., Canada, etc. I realize this isn’t a flight simulator and truly that isn’t the point, but it is added depth and perhaps fun to fly to another person’s airport and then explore it on the ground as a “pawn.”

Certainly a number of these ideas can be expanded upon, improved, or modified and that’s why I welcome discussion for brainstorming.

I don’t think this is a necessary feature, by any means. It is more of a luxury that could result from eventual development of the game over time. I certainly understand it’s a long-term goal and difficult to implement. Whether it is feasible or realistic is a fair question. I think the point is to better connect the players and create a more living world. Right now, the world feels somewhat empty (except for our singular airport). 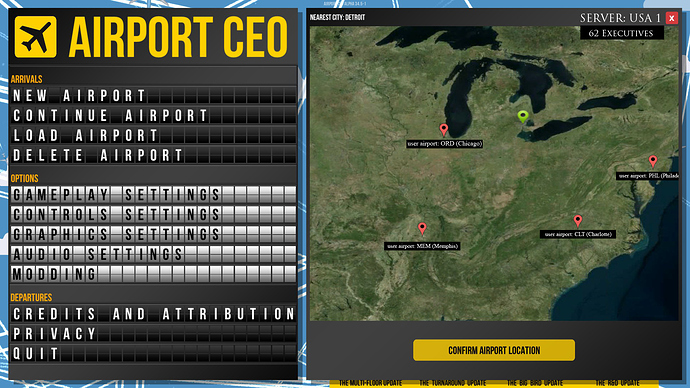 I’ve created a very simple mockup for the opening map screen. The idea I’ve demonstrated is, when picking your airport, you can see where other users are located. The upper right also shows how many other players are on this particular server and the server name. Of course, selecting which server would be its own menu screen with the applicable list.

Each pin would include username, airport name and/or IATA code, as well as nearest city. This would help you with planning on where to place your own airport for purposes of travel time, flight interactions, etc. Maybe the game places a limitation on airports in a certain geographical radius (say you can’t build within 100 miles of another airport of something). Those are details less important for now.

I would also add an in-game chat so players could communicate with each other. Maybe as CEO you fly commercially to another user’s airport (with flight plans included in some contracts), or maybe you fly a private jet on your own terms to come and go as you please.

It has been requested many times; Developers clearly stated that there are no plans for multiplayer at the moment for Alpha, Beta and Full Game releases.

I know, that even if developers would want to implement this idea to the game, it would not be any time soon, probably after release of the game. But I would like to talk about it anyway, that’s what this forum is for, right? wink: I actually have two ideas of multiplayer, maybe could have both together, but that is very unlikely. More people, one Airport: You could connect to someone’s (eg. Your friend’s) airport and build with him. Everyone would see the changes done by others in real time.…

A Multiplayer System (Here Me Out First) Support

I know it has been said no a couple of times here but maybe you could do something related to multiplayer. I have had this game for a while and played it a couple of times, but I as a social being, play a lot more of the multiplayer games so I can enjoy them with others. As someone who does play more multiplayer games similar to this, a multiplayer feature would appeal to a wider audience as well as create a greater strategic atmosphere that the game needs. Let’s start out with some of the basi…

At first, you might think this idea sounds a little bit silly, but I think it just might work. So, multiplayer! Yes, yes. I know. How can you possibly make a multiplayer for an airport tycoon game, but here me out. In the multiplayer, you would be competing with everyone to make the most profitable airport within a certain time frame. At the end of the time, each person would get points for being the most profitable, best passenger happiness, best airline happiness, etc. I think this could be in…

What is the future of AirportCEO? I’d love to see a roadmap [features] and future business revenue stream ideas [DLC]. In absence of this roadmap and, given my searching skills using this forum found nothing similar, I want to suggest something that I have not seen yet Multi-player permanent environment. Each player connects to a server that hosts the world. Usual problems with ping and connectivity and service level agreements and what not, but this Airport CEO game does not need real-time…

I totally agree with what looks to be a quite excessive amount of topics for a feature that will not be implemented into the game by the devs, but it defiantly does not stop the community to fix this obsession over the feature.

On the flip side, although I personally only see very limited added value in multiplayer (having flights to a friend’s airport is nice but also useless and an airport doesn’t determine the destinations), there should still be a place for people to discuss this since the amount of previous posts clearly indicates that a least part of the player base wants multiplayer.

Maybe multiplayer would be interesting if you work on the same airport or have some kind of competition.
(Both things I don’t need)