How about making a version for outside use, walkalator with glass ceiling/roof! Would look awesome

Or just place foundation, remove all of the walls and you have outdoor walkalator. It will have a roof that will show when you switch to the next floor up.

I’m not against this, but just for curiosity, do you have any examples of this in real life? A moving walkway, also known as an autowalk, moving pavement, moving sidewalk, people-mover, travolator, or travelator, is a slow-moving conveyor mechanism that transports people across a horizontal or inclined plane over a short to medium distance. Moving walkways can be used by standing or walking on them. They are often installed in pairs, one for each direction. The first moving walkway debuted at the World's Columbian Exposition of 1893, in Chicago, Illinois, in the United States as The Gre...

There’s a picture of the first one “The Great Wharf”, it looks to me as if it was outside with a roof.

Guys, I don’t know if you’re planning the overhauling of the taxiing method, (and sorry if this issue was metioned earlier), but my airport is suffering from the inefficiencies in the taxiing and pushback process.
The main problem is, that if an airplane is taxiing, or a pushback has been started, an other bushback and taxi process will not be started unless the former aircraft passes the other one.
Like on the screenshot, SAS jus started the pushback, Wizz is ready for it, too but, it has to wait until SAS passes. It would be possible to pushback simultaneously the two aircrafts. The problem is, that if you have a long pier, I have more than 10 at this terminal, at the last gate the flights are always delaying like crazy, because the program does not start the pushback, though there would be enough space. 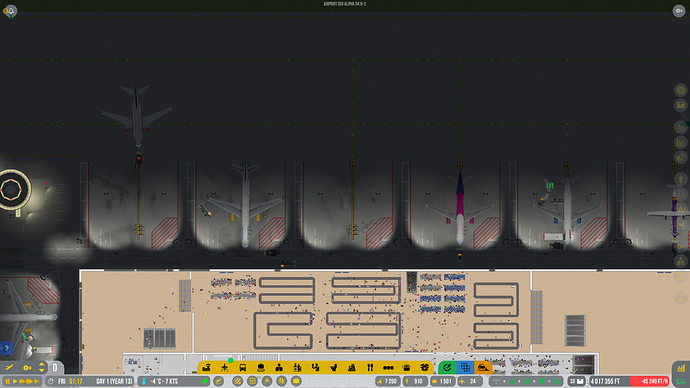 I had this problem too!

TIME: 0831 As per the flight monitor, the flights labelled A and B were supposed to leave first at 0815 HRS. But flight C finished all turnaround services and passenger boarding. Hence, it was allowed to taxi first, even though it was scheduled to leave after A and B. [Screenshot%20(109)] TIME: 0838 After C leaves the apron, flights B and D start to taxi simultaneously. B is already late by more than 30 minutes. D is on time, scheduled to depart at 0845 HRS. [Screenshot%20(110)] TIME: 08…

No one replied to this. So I started building smaller piers and cut down on the number of stands.

That’s not that okay. I mean, sure, you have to tackle with this situation, but the resolution supposed to be the overhaul of the system by @Olof and the team, not the alternative terminal and taxiway building by the players. IMHO.

I have stop playing the the game till alpha 35 comes out. Yes I have had similar problems

When is Alpha 35 going online? Are there some timeframes?

As stated in Devblog 146, you can follow the process of development via trello board. There are no announcements about release but assumptions state that there are couple of weeks of development ahead.

Is the new devlog coming today? Please follow the status of devblog via; https://forum.apoglabs.com/t/the-dev-blog-status-updates/11767 Devblogs are released around night times for European time zones and morning times for USA time zones. If devblog is not released at that times, there is 99% an announcement on the topic above

May if not already done, can you allign the “please wait” text at the passport checks? See my example below. 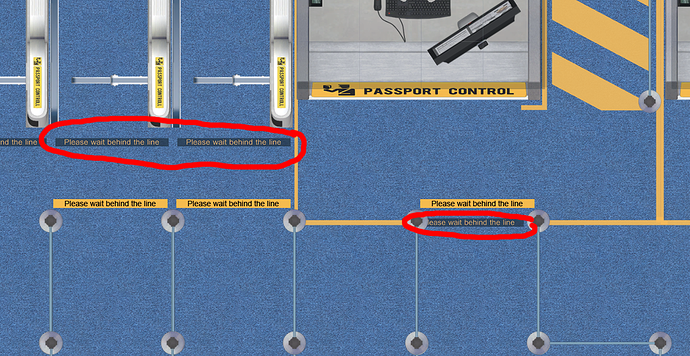 Is it out yet? I don’t have the update.

No, it’s some time yet before it will be available publicly. We have no release date set, it will be out when it’s out!

If you look at this example, the passport scanner is after the first door. The ones I know without this line have the scanner before the door. Don’t know if those here are real.

Future Olof, when doing a family road trip… kids scream are we there yet… Olof replies "No the road foundations have not been built yet, the roads still need to have tarmac on them and the white lines painted. Then a wry smile as he slowly says the most famous of words… Soon™

That’s right, the actual scanning happens after the first door