The security stations that are in the game are really large mainly referring to the medium security station. My idea is to make the id check stand, baggage scanner, and metal detector separate objects, sort of like sim airport. We can create a security area that is very narrow, only like 1 tile wide. We can start with that and when we need more gates getting more security in is not so much of a hassle. I recently played a game where I did not set up the security area to be able to accept more stations. It was a pain to expand the terminal. How it would work is that the metal detector and baggage scanner would be one large tile wide (4 little tiles I think). The id check stand would only be 2 little tiles wide. When you create a security area it would be a specific room. You would place down all of the objects needed. You would click on the baggage scanner and connect the metal detector and up to two id check stands. Id check is usually pretty slow in real life so it makes sense to be able to assign two id check stands to each baggage scanner. Connecting them will tell the passengers which security object they need to go through next. Each set of connected objects will act as a single security station and can be set to passengers, staff member and maybe even first class passengers if the developers allow it. Each object will require one staff member to operate it so each station will have 3-4 security staff at it. It even could be a procurement option to get automated baggage scanners which can handle passengers faster and use fewer workers. These automated baggage scanners have been introduced in San Francisco International Airport and Denver International Airport.

This would allow us to put more security in one area. We could customize the setup anyway we would like and add some more realism to the game. It would be more fun to have more options when it comes to security. Most things in the game can be thoroughly customized. Making security more customizable will allow increased passenger throughput and less space consumption. 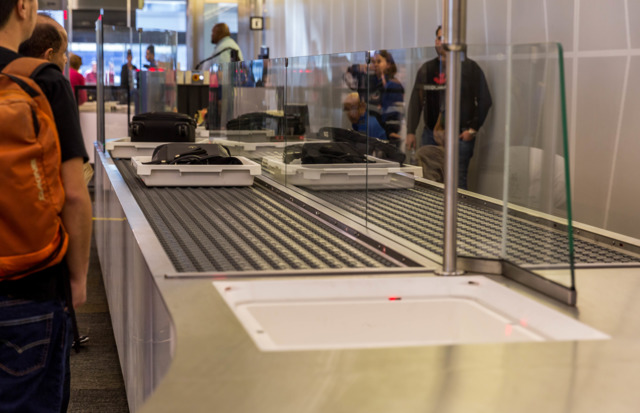 For Christ’s sake! Don’t mention that crappy piece of software in my presence ever again if you please!
However, no hard feelings.

The idea itself… very interesting. Kind of “building” your own security checkpoints, connecting all the placed stuff together, I like that.

ARGH!! And once more, dammit…

Maybe I should just flag these comments…

I see you’re not a fan of SimAirport.

I’m also not a fan of this game… and I think we should have even better security system.

ACEO FOR THE WIN!!

I think thats quite unfair. Although I think ACEO is the better game , Sim Airport has come a long way. The amount of features the Devs have implemented over the last 18 months or so is incredible. The game has so many fully fleshed out features now. There is a lot of gameplay. Much better than the dross they had initially released

I know what game you are talking about. Do you really have to MENTION IT’S NAME??

And taste is almost always quite unfair. The look of this game is an insult to my eyes.

They do quantity or quality…

That sums it up!

GUYS can we stop arguing about which airport tycoon and management game is superior than other one on a Feature Voting topic?

Meh there is no fight here. I clearly mentioned I prefer the ACEO style. However just because it is a “competing” game and not to your taste doesnt mean you disrespect or insult it.

However just because it is a “competing” game and not to your taste doesnt mean you disrespect or insult it.

I am not insulting or disrespecting anything. I just said that this topic under this category is NOT the suitable place to compare games.

I will have to lock the topic if discussion continues towards comparing ACEO and other indie games.

Yes you did not. That part of the comment was not directed at you.

Let’s calm down guys! There’s no which game is better here. Each game has its unique features and characteristics. Because of this, some people will like a certain game more than the other (and let’s be happy that everyone has a different taste and likes different things, our world would be boring otherwise).

The devs have always been saying that they’re simply not looking at other, similar games as it just doesn’t interests them. They have their own idea in mind and want to do it their way, which I completely agree with. That’s also why we tend to limit the posts referring to other, similar tycoon games. ACEO is ACEO, and we don’t want to compare to other games neither can we actually compare ACEO to other games!

I think ID checks must be separated from security checks. That is the case in any airport I’ve seen, you need more ID-checks on international flights than domestic, you need check Id but not (necessary) security when changing flight between international and domestic., and there are different authorities running these checks.
I didn’t look to close at the implemented security checks, I assumed ID checks are just not yet in the game. They’d need a new zone (like secure zone): international zone (and also a zone for customs checked when customs are implemented)

Would be nice to have the possibility to create own pre-fab facilities by combining e.g. scanners, belts, detectors to a security check… or chairs, tables, desks to a restaurant etc. and save them as combined objects for later use or upload to steam workshop (as seen in Planet Coaster and probably other games with a build component)

Every airport I have been to has the Id checks right on front of security. It is the first part of security. They scan your boarding pass and look at your id.

Many airports in EU often have no ID-check (except of check-in desk, you can avoid by web-checkin).

There is sometimes, as you wrote, just a quick-check (if ID-name is same as ticket name) befor entering security checkpoint, but that’s not an ID-check (or passport check).

At bigger EU-airports more and more terminals having there only a ticket scanner, before entering security checkpoint, just checking if ticket is valid, no ID check. I recently know from FRA, VIE, AMS, STR, about several other ones I’m not absolutely sure. I’ve even flown a few times inside EU (Schengen-area) without having an ID/passport with me (by mistake).

For intl. flights out of EU it depends on airport, e.g. in VIE & FRA you first pass security checkpoint (only ticket-scan, no ID-check), afterwards comes shopping area and before you are entering gate, there is ID/passport control - at least at the terminals I’ve departed from within the last years…

So as @Titule wrote before, ID-check is only necessary if there are domestic and intl. flights, same as customs. But if so, I think it must be a modular system, too!

What I usually experience is that they still do an ID check during boarding in these cases. (In EU airports, Schengen) I think you’ve been very lucky to be able to fly without ID/passport, as I often encounter this check at the boarding desks.

As far as I know, ID checks within the Schengen zone often happen on request of the airline. At for example Ryanair or Wizz Air, they demand that your passport name is the same as the name on the ticket and therefor check the ID (not to be mistaken with an ID check by authorities) while at for example Transavia or TUI Netherlands they only check whether you have a valid ticket.

On a legal note, structural ID/border checks performed by the authorities for people travelling within the Schengen zone are forbidden* by European law. Exemptions are only made for temporary measurements such as states of emergencies after for example terrorist attacks.

*As determined in Article 23: “Exercises of authorities of Member States may not have border control as an objective” Schengen Borders Code