fingers crossed there is a solution!

No animal issues or emergencies that I am aware of - has happened suddenly without any noticeable change or building work. 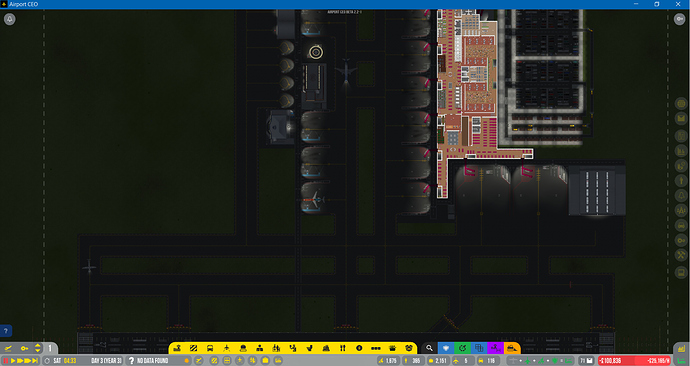 Yes that’s currently an issue since the other pathblocking issue has been solved.

This is true. Since aircraft are now allowed to swap placed in the queue to “skip” sections that they previously waited for. Rare cases when two or more aircraft skip the same part can lead to them actually creating a deadlock on their own. There is a timeout so they should continue after a while but even if they do exactly what they are suppose to do according to the rules, they just don’t do see the potential deadlock ahead. Basically this is why we have humans IRL in the towers making sure this doesn’t happen. We are looking into a ways to solve it.

No timeout - so is my savegame ruined now?

On my XXXXL airport, they started to overtake the locked plane and later they solved the issue… until the next plane got stuck. Yes, currently it can be very annoying.

Sounds like a critical bug @Olof? But i’ll stay optimistic and hope there is a solution to not running into an airport killing situation

I mean, for larger maps (which seems to come in Beta 3), the situation before was a gamebreaking issue when planes were blocked for hours because of others.
So far I play happier with the new bug.

But I’m looking also forward for a solution.

Reality is, we now have a total deadlock bug, rather than an “inefficiency” situation. I know the devs will resolve it but it seems to be quite a critical issue if instead of less-ideal taxiway routes and give ways, they now just deadlock without any solution possible leaving an airport unplayable.

Seems to be tied specifically to your airport designs, I have no other reports in the backlog on this issue other than the one you made and am running a few different airports on a few different machines without any issues as of now. Will continue to monitor this and I’m sure Fredrik will have a look at the save tomorrow but at this point it only seems to affect only a small amount of players.

Maybe some form of triggered “refresh” if deadlocked for too long or if taxiways limits added (to resolve a deadlock by making a suspect taxiway to oneway to force a new taxiway route?) Thanks

Any news? I’ve tried everything but theres no way I can find that will resolve the deadlock. The small aircraft shown holding just short of the actual holding point, and the aircraft waiting to push back far left in both screenshots seems to be the issue

Is there any way in my save game that I can trigger aircraft to clear?

Can you take a look at this @Fredrik?

i seemed to have to do it immediately as the save game loaded for it to work. My guess is the aircraft exiting the runway was forcing a path through existing aircraft routes causing the deadlock but that is just a guess.

All right, that’s good to hear, does it keep happening or was it this instance only?