ACEO-40271 Pushback without boarding any passengers

Currently on Beta 5.1-4 and noticing still a few instances of flights pushing back from gate (as if they are being dismissed) without boarding any passengers, then seeing the passengers leaving the secure area as one big crowd.
ACEO-40271

Posting in case anyone else having similar issue, or may be noticing a lot of “missed” passengers. I’ve been able to find the source by checking the flights the passengers are missing, to notice it’s all from one flight rather than a random minority from different flights.

Does it also appears random on your airport or are you able to reproduce it or is it always at the same stand?

I had this case on a flight recently, then I waited for the same flight on the next day and it was ok there.
I think it must be a very complex order of completing the service tasks that this happens.

What is your Auto-Send-Away setting?

In my case send away.
But pushback starts sometimes 1 hour before the boarding should open. 2 hours before scheduled departure.

ACEO-40314 - A clearer incident than the original. I’ve managed to pin point a bit better what might be the issue. This flight and the one beside it both had STD of 1830. The flight shown, pushed back midway during boarding with a crowd of passengers at the boarding desks ready to board.

Catering and cleaning were delayed, with cleaning being the issue which held up boarding (I’m assuming that realistically, the game simulates boarding can no start until cleaning is finished?) Boarding started as soon as cleaning was completed but then boarding was cut short.

Maybe there is a issue with cleaning delaying the boarding process triggering, which then means boarding runs out of time on the timeline before pushback is triggered? (this was with “prompt” for delay setting, but did not notice a prompt for this specific flight) 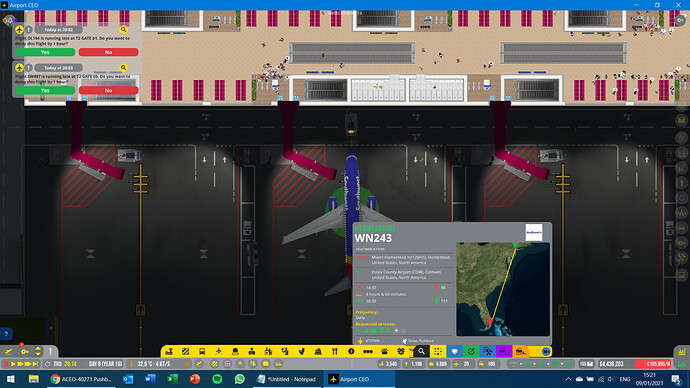 the game simulates boarding can no start until cleaning is finished?

Correct. Also cleaning cannot start when deboarding is not finished.

This might be the reason why I do not get the pushback issue on my airport where baggage service is disabled. I am wondering why the pushback truck gets triggered by two different events.

I have this problem as well. 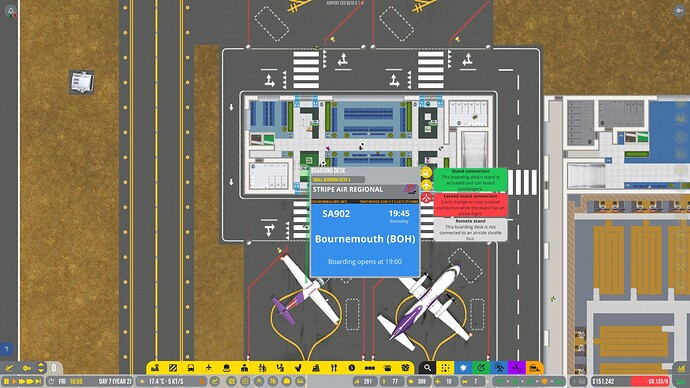 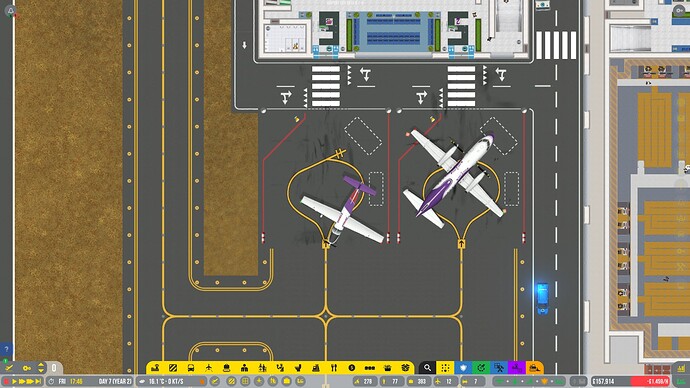 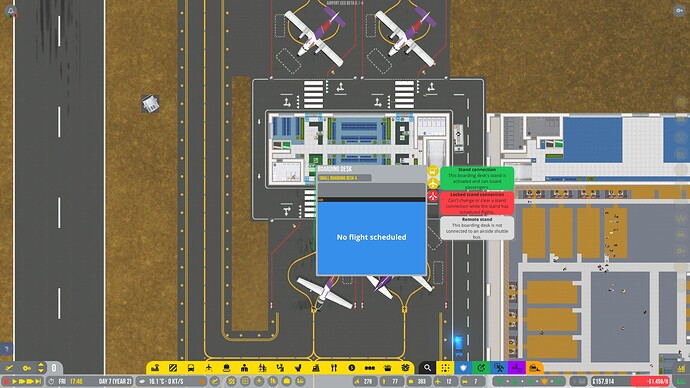 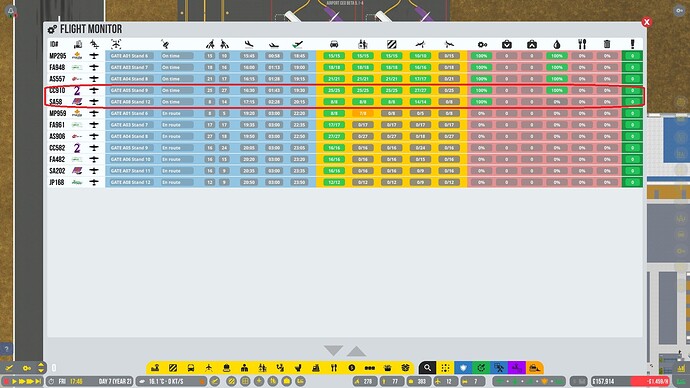 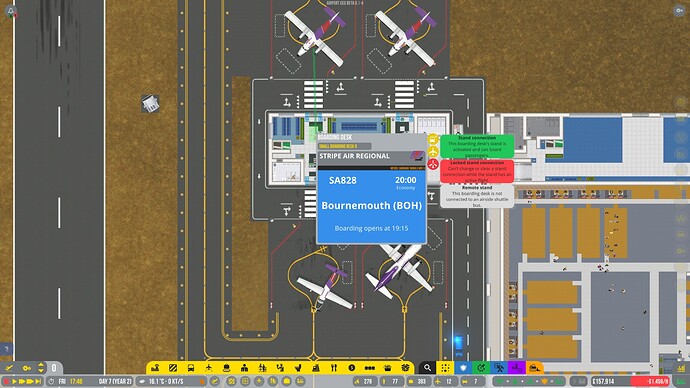 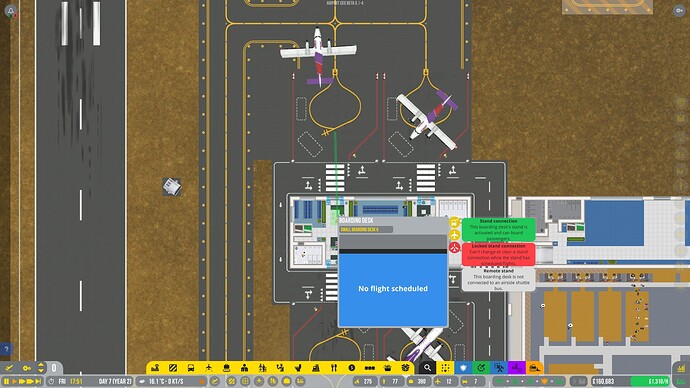 EDIT: Next flight cycle, four aircraft decided to leave the stand after one hour… 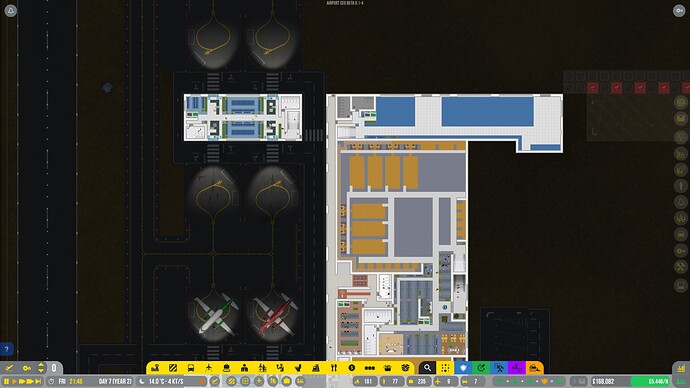 Another EDIT: After looking at the Flight Monitor for a while, noticed what was happening. At about 2:20-2:15 on the countdown timer, the ‘boarding’ column will suddenly go to green with ‘0/x’ inside it. At 2:10 on the countdown timer, the status will change to ‘Taxiing’ and the flight then leaves the stand. Cannot find any reason why at the moment, only that it appears to be happening on any of the stands on that Gate arm ie Gates 5-8… 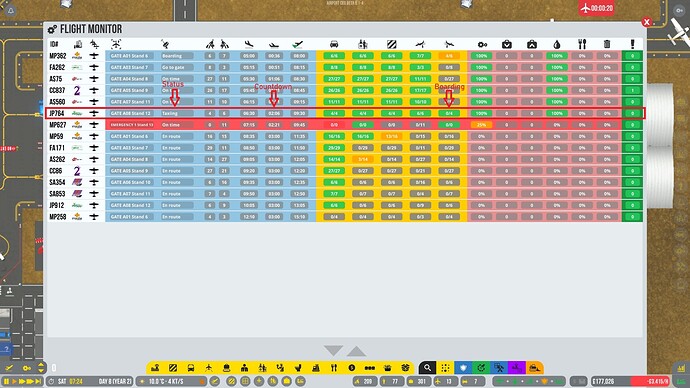 Yet another EDIT: whenever I’ve caught a flight about to leave a stand but the flight is still on the boarding desk, I have been unable to account for all the passengers that have have checked in, and gone through security for that flight. It appears some passengers are either leaving the terminal, or just disappearing. It seems whenever the simulation can’t account for all the flight passengers the turnround process for that flight is aborted.

After some consideration, I thought that the PAX were getting pi… er, didn’t appreciate the long walk from the main terminal area to the Gate arm, so I went back a while and rerun the game, changing the design of Floor 1 of the Terminal, making the facilities more central between the Gate arms. Things worked well, no early departures, until: I relocated the hangar by building a new one at the end of the taxiway and deleted the old hangar (as I had done in the first run through). Almost immediately, I had my first early departure - cause or coincidence?

I’m not fully sure I follow what exactly the issue is here, could you summarize it a bit?

Flights pushing back from gate, without any departing passengers boarding the aircraft. This is happening so far as I can notice on connected stands (airbridge). There will be a crowd of passengers nearby ready to board, the desk will be staffed and advertises the correct flight. But boarding never begins, or begins for just a few moments before terminating, leaving behind most or all the passengers due to board the flight.

The only pattern I can see is if cleaning is delayed, therefore delaying the start of the boarding process. Instead of allowing the late boarding to happen, the flight pushes back without anyone boarding (or only a small portion of passengers boarding).

The departing passengers wait nearby, then queue at the boarding desks when boarding opens, but instead of boarding, the aircraft immediately pushes back, the passengers leave the airport as if they have missed flight.

TL:DR - Flight turnround is being aborted before the boarding desk is opened, thus the departing passengers don’t get loaded onto the flight.

In my case the stands are ground-floor access. The flight monitor suddenly changes the boarding passengers to ‘0/8’ (eg) and the plane immediately leaves. This screenshot is particularly relevant.

I see. There’s an old safety measure (but it checks out) implemented, checking that if no passengers has made it into the secure area when the deboarding process is done the flight will immediately be cleared for departure, that might be what is happening it here. I cannot see it happening in your saves but I recon that it shouldn’t trigger unless it’s actually time for departure, since I guess these aircraft are leaving prematurely?

Sounds weird. When I noticed this, they were sitting right next to the boarding desk.

In this case all PAX make it through security.

When I manage to catch the errant flight still on the boarding desk, clicking on it and then looking round the Terminal and transit area, I cannot find all the passengers for that flight, one or two are missing. Observing the relevant gate, after the flight leaves, there is a steady stream of PAX going to the gate, seeing the aircraft missing and then they leave the Terminal.

Only in one case did I find all three passengers, they were sitting in the Gate area for a Cessna flight with only 3 passengers on the manifest.

Well, the next beta version will have a fix for the issue I mentioned. If the problem still occurs after that we can at least rule that bug out and have another look at it! I can’t reproduce the issues mentioned in this topic with the fix in, at least.

My observations on this seem to be boarding will close no matter what once departure time - some buffer time approaches, even though the flight is delayed due to services still being done like baggage, fueling and catering. I’ll check again on the next beta like to see if the issue persists after seeing Olof’s statement above.

The Deboard - Cleaning - Boarding flow makes sense, but Boarding should still be allowed to continue long as passengers are in the secure area and services are still being rendered.

This is all my opinion on this, but example here…
The Maple flight 140 cut off boarding at 488 boarded, but only 488 pax made it through ticketing and security so there’s an issue with pax getting through my airport meanwhile the flight is finishing loading baggage and fueling. This I think is expected.
Looking at Zoom flight 10 though, all 137 made it through checkin and security, there’s 1h15m to go before departure and baggage is still being loaded, but it cut off boarding at only 53 pax boarded. I didn’t check to see where the pax were in my airport, but it feels like it is closing boarding very early. 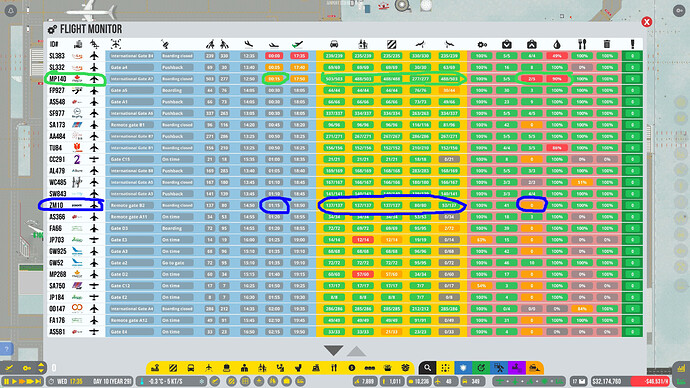 Also not sure if this is just a display issue or an actual time issue that could cause problems…
This flight to HKG was deboarding at the time of screenshot, but boarding time is listed as before the current time. It did manage to fully board and actually push back early at 17:34 after this. 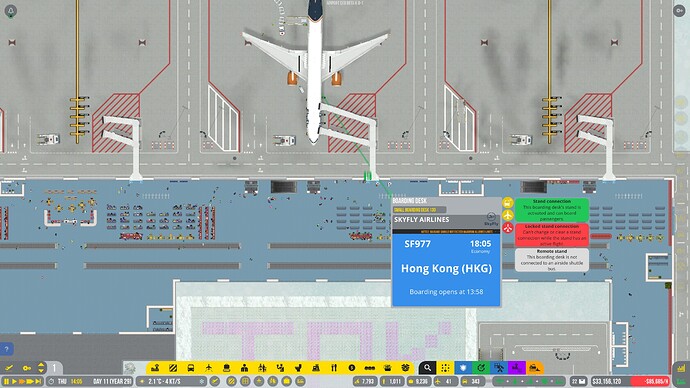 So I updated to 6.0-1 and loaded one of the game saves where the flights would leave early. After 3.5 game days, not one early departure.

So from my point of view, that’s one bug that’s been well and truly squashed…

Great to hear! Let’s cross our fingers and hope that those pilots know their place from now on…