I wanted to pick a smaller city near a major one, and went with Yonkers. The game does not recognize it so it is technically in NYC.

Anyway, i started on the left part of the terminal with 4 stands, and as you can see we are in the final process of opening up the top middle with 6 new stands. 4 final are planned on the right. Further expansion may occur by removing one of the 6 stands on top and having the terminal extend north of there.

This is my first effort with a single secure zone, and with really kitting out the airport with nice looking stuff. I really wish there were more floor tiles, but that is something that can maybe be modded or quickly added when they have time. The ability to color the basic patterns would be a nice add. 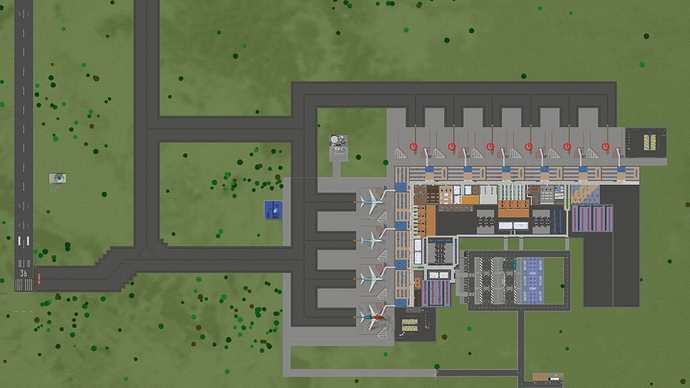 Let me know what parts you want closeups of and I will upload.

Looks nice. You can probably eliminate half the gate seating to reclaim some space. I’ve found six per gate is still more than I need.

I had less but people were sitting in other areas so i upped it. 9 should be the most needed at any gate and that’s only if you get a full 737-800 to load.

They don’t have to sit at the assigned gate; they’ll find available seating in the general vicinity. IRL you normally won’t have multiple adjacent gates deplaning/boarding simultaneously (I’m looking at you, IAH Terminal B!).

There’s always also some that are in the lav, at a shop/restaurant, milling about smartly, etc.

Very true, I will adopt that in my next airport.

Try White Plains or Stamford, I know Stamford doesn’t come up as NYC (I’ve built an airport there) Also, maybe you were too far south in Yonkers

They probably didn’t allow it on the map. I can’t do my State’s capital city nor largest city, it defaults to a much smaller city in Iowa instead. Devs removed a lot of “smaller” cities, but it appears quite random. For example, try making an airport in Kathmandu, you will be in India.