Will this baggage system work? 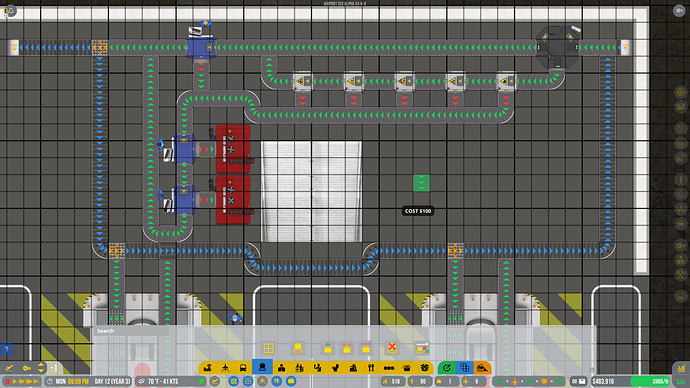 Airport CEO 2_9_2020 9_49_51 AM1920×1080 784 KB
my new baggage system. will it work? basically bags come from the left and go through security as normal but on the right side its sorted between going to a baggage bay and going to baggage claim. then it heads down to the bays. incoming bags join that same belt and head back to the start of security. on the right its sorted to claims
1 Like
andyc February 9, 2020, 3:33pm #2

I use a shared scanning system for outgoing and incoming baggage and it works. Your’s just looks a bit oversecured.

Bit overkill, it will probably harm your ratings even though its very secure.

The tier 3 scanner at the top is checking bags that are considered 'clean by the tier 1 or tier 2 scanner. According to the tooltip for security ratings running stuff through a higher tier scanner after it’s been marked as ‘clean’ on a lower tier harms your rating. Only bags that are flagged as suspicious in tier 1 should go to tier 2 (as you’ve done) and only those that are flagged as suspicious by tier 2 should be sent to tier 3.

If all your security staff are well trained (you can train each staff member up to 3 times on the panel where you can view your current staff), not tired (keep shifts short) and not needing the toilet (have staff bathrooms near places where security work: baggage scanning and security checkpoints), then the first tier 3 scanner will catch anything that breaks the rules so anything that reaches another tier 3 scanner will be ‘clean’.

You don’t need to scan incoming bags at all.
Sending stuff through several tier 3 scanners one after another is pointless.

The rating system is currently biased against over-protected designs. So while this design will work, you scanning ratings will not reach 100%. I’m not sure if we’ll keep this however, it was originally intended as a feature to help you design the system the correct way and punish you for building inefficient over-secured systems but this both harms creativity and also you’re already sort of punished indirectly with increased operating costs and workload for those extra scanners, so we’ll probably adapt the system to only look at if bags have been correctly scanned and not if they have been optimally scanned.

Ok thanks. I am running it with bags and it’s working fine