Where did the large runways go?

In Devlog 42, the Devs talk about implementing small and large runways. While the small runway is basically the only necessary in the game at this point, where did those large runways go? I can’t find them in any of the building tabs or the procurement tab.

EDIT: Nevermind, found that you can upgrade the small runways by clicking on them and clicking upgrade.

You mean by theses large upgrade runways east to west?! 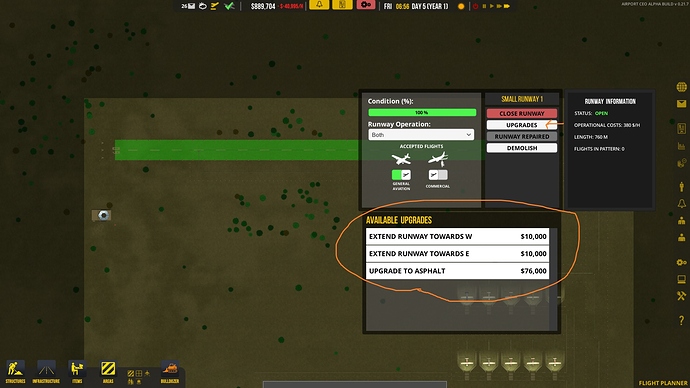 You have to click on the runway and menu comes up, then goto upgrades and click on extend runway towards W&E. And your runway grows large blink of the eye!

Yeah, I somewhat meant that, but there were also larger and wider runways shown on devlog 42. I’m not sure if they just got rid of it for the time being or just removed it entirely.

If you look at the images from the devlog, it shows this comparison between the large runway and the small runway.

They are not in game for the time being. I suspect because there are no aircraft larger than a 737-800. I’m sure they’ll be back later when more bugs are squashed

They are ready to implemented but we are holding it off until everything is stabilized for future expansion!

@Olof Is there currently a benefit to extending the small runways?

I saw that you guys implemented a way to expand your land. I’ve looked all around and can’t figure out how. Is it not in the game yet do I just suck at finding stuff?

It’s “in the game” but not enabled since we do not support it in any way, puts a heavy strain on your computer. You can unlock it if you change some settings in the save files though…

Ok thanks. I’ll see if I can get it to work without screwing everything up lol.

Thanks for the reply!