Hi,
I’ve been playing mostly on easy so far and have started a hard game now. It seems like apart from the starting money, there’s not much difference at the moment. It still seems very easy to earn money and expand my airport. Lots of GA, still the same airline contract offers with the same payment etc.
Please don’t get me wrong, I don’t mind since it’s the alpha and I’m not expecting everything to be there already, I’m just curious.

Hey! There’s no difference right now but we will of course change that. We have a quite nice curve system in place to render the terms of contracts over time and could based on the player input setting, for example, give contracts harsher terms. When incidents is introduced, those will of course also play a role into a difficult setting.

What would you like to see be affected by difficulty?

, not satisfied customer, failing to complete contract on certain days, lost luggage, Having a lower income on airplane arrivals and departures.

Edit: One more thing. It would be great if things could also depend on the location of your airport. When it’s in the middle of the dessert, things are even more difficult than when you’re close to a big city.

Edit: One more thing. It would be great if things could also depend on the location of your airport. When it’s in the middle of the dessert, things are even more difficult than when you’re close to a big city.

Yeah, having utility and constructing air condition a la RimWorld would be quite cool. Damn, we really need that location and biome data… does anyone know if there’s any database site where you can buy stuff like this? I’d like coordinates being the key and then just a bunch of metadata around biome and climate, imagine the cool stuff we could do!

IMHO, I’d prefer not to have reduced/increased costs of things since it would seem more like an artifical and/or cheap way of increasing difficulty.

That being said, I like the way PA opens up the option for players to ramp up the difficulty, and I think this should be what the sliders do.

So for example, if you play in Easy, you rarely have incidents, and even then they are mostly just due to randomness (i.e. typhoon, bad storm, flash flood, etc.), but when playing in Difficult, your incident should often be tied to what you do/don’t, i.e. incompetent ATC staff could lead disastrous flights, poorly maintained runway would allow planes to skid off the runway, etc. This would make trying out a harder difficulty setting something interesting. If we then don’t want to lock such mechanics behind difficulty, then we ramp up the effects: an incident is usually tied with the response as well. In Easy, they wouldn’t really affect the way airline contracts with you, but in Difficult, it could mean airline breaking contracts with you until you improve your safety.

@Olof do you mean something like this? Current weather data - OpenWeatherMap

Cmon, it’s not that hard to get a decent approximation with a little effort

No, but I don’t want decent, I want exact (or as exact as possible)

… in the long run I think its a better investment to get a rigorous system going from the start, that builds on as actual and rich data as possible, rather than me hacking together a few assumptions.

You are correct of course

Hmm they seem to mostly link to Wikipedia page, and not too precise on coordinates.

Depending on what you want, these might be useful 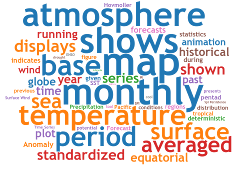 The IRI Data Library is a powerful and freely accessible online data repository and analysis tool that allows a user to view, analyze, and download hundreds of terabytes of climate-related data through a standard web browser.

This is a global overview, they have 600+ feature types

Hmm, but isn’t the objective to collect biome data as well? Geonames afaik doesn’t have that.

You want features to know

And the climate data helps in getting the correct weather

On the “what country you are in”, isn’t it already in-game? I agree on making it more accurate though, which Geonames could do (on the plus side, it would also help for cases like the Perth airport bug).

Maybe the “Global Summary of the Year” from Datasets | Climate Data Online (CDO) | National Climatic Data Center (NCDC) would work, has all the data you need from thousands of stations worldwide as .csv but I suspect you’ll have to do a lot of queries until you get to store all the data you need.

And because this would only affect how fast/slow you progress it should be accompanied by:

Steeper fines so you are careful with contracts (right now shop income outweighs fines for non-completion - there is no reason not to sign them even if you have no passengers).

EDIT: forgot happiness (for airlines, shops, passengers, etc). Assuming you follow a system of 0-100 were 50 is OK, then:

How about something like MSFS, where live weather data (METARs) are simply downloaded for the nearest real-world airport to the selected location. This could also dictate the active runway direction, weather delays, and more.

Did any of you already try out the Extreme mode? I got upto medium stands and concluded stuff worked as intended ;). Then started the game again since I did so many things I should have done differently.

Right now losing money is barely possible. Maybe make it a bit harder to be a billionaire?