Um, I’m confused, will it be u schedule for each day of the week, or one flight planer for the week? If so, then how would weekly flights work? I saw them in the video.

Going off of the third gameplay video flights are scheduled by day. You have the ability to go a certain number of days in advance and schedule flights then. Hope that clears it up for you.

Flights are schedules once for now. This will be one of the first thing we will look into after release as testers have said it is quite boring to manually schedule all flights for each day.

So this means the contract system might be changed as well? Since flight scheduling depends on the contracts?

Not too much. Instead of having a X number of flights to schedule and complete, you might have X number of daily flights for X number of days in order to complete the contract.

So that means my airport has to have 2 flights a day and 6 days a week so in conclusion I will have 12 flights over 6 days period?

That could be the condition of one contract yes, but this is not finalized yet.

Then will there be contracts in which I plan like; 2 flights a day, for say 5 days a week and then for multiple weeks? Or will the contracts always stay within 1 week period?
And do contracts give a window in which they want to arrive and takeoff? (So u have a smaller schedule window which would make it worth more take 1 contract over another due to timetable and income of that contract)

Not yet, the initial version has only single (once) flights and you are free til allocate them when you want. The turnaround time is dependent on the size of the aircraft. A contract includes somewhere between 5- 15 flights.

I’m not going to pretend I know all the ins and outs of airport scheduling, but one thing I’m pretty sure about (at least from what I’ve seen in NZ) is that the same airlines seem to have the same flights to the same places at the same times on the same days.

With this in mind my comment is, wouldn’t airlines come to our airport seeking particular time slots of the day? Ie to satisfy commuters, or holiday makers? You can see it quite easily in the schedules of the main airports, clustered around 6.30am till 8am and 5pm till 7pm you’ve got flights leaving every 20 mins to the other main centres to account for business travel, during the day flights to those same places are every 60-90 mins apart.

The way I’ve seen contracts and scheduling work in the videos seems to be contrary to this, and we seem to have more of an ad hoc flight scheduling system in place, for example like an airline might use around a special event etc to temporarily increase capacity. In general however an airport would sign contracts with airlines that are 6-12 months in duration and would include preferences for morning/afternoon peak, frequency etc etc.

It seems we’re almost missing the mark with the scheduling side of things, on the whole, once you’ve got a contract with an airline, the schedule should be pretty self managing, until such time as schedule renegotiation occur.

Another point, I know that a number of airports renegotiate key contracts at around the same time, reason being is the airlines are all competing for the best time slots, they do this to push up pricing for gates and time slots during those peak times.

I completely agree, from what I’m seen from the videos I also think it’s too arbitrary and unrealistic. However, I think this is something they’ll focus on after they release early access since they’re trying to make it as stable as possible.

Flights are schedules once for now. This will be one of the first thing we will look into after release as testers have said it is quite boring to manually schedule all flights for each day.

According to this post in this thread they will look into soon.

If only the each day had 10 hours more…

We work by gradually increase quality on all gameplay aspects. So yes, I agree these things should be in place but there has simply not been enough time. We could have spent a lot of time on this creating a complex flight scheduler but then the that would mean less time on, for example the baggage system, which could have lead to that might have been out of scope for the initial release.

You will encounter many aspects of this game that are not finished, it doesn’t necessary mean that they are missed. It is almost always a matter of time.

Hey @Fredrik, I know you guys have put in an amazing amount of effort, please don’t treat my comments as anything other than constructive critique. Off the back of my comments I’ve actually created another thread under airport operations to start considering what the next iteration of scheduling could look like, I’d be grateful for your comment! Cheers man!

No of course not. I just wanted you to understand the reason behind some of our systems and also so you don’t think we forgot or missed it.

Hi Fredrik,
Airline flights have fixed schedule every week. The airport is not responsible for setting timetable and flight schedules, because that’s the duty for the airline. The flight schedules will be setup before the contract is signed. We as the airport manager is responsible to reserve the gate, runway and offer services to the planes.
In the real world, the flight dispatcher is responsible to schedule the flights of the airline he works for, and also set the timetable of each flight. Please look into this, I would suggest you adding fixed week schedule and timetable option in the airline contract.
The flight dispatcher will also communicate with the airport in case of bad weather or they have to cancel or delay flights. If a flight is canceled, he will inform the airport prior to departure. If a flight is delayed, the airport will also receive the information from the airline regarding the ETA (Estimated Time Arrival). The airport will reserve gate and provide services when the flight is arrived.

Here is the timetable of Air Canada in the real world.

Assuming I am a flight operation officer at Vancouver Airport (YVR). My Airport signed a contract with Air Canada. And Air Canada provides us with the following schedule in the contract. 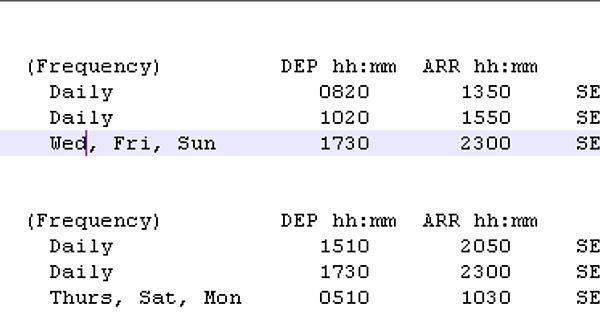 Notice we have a flight leaving next day, which is AC922/921, it lands at YVR only on Wednesday, Friday and Sunday per week at around 23:00. Some domestic flights aren’t allowed to fly late (This is only a “for an instance”). Therefore they cannot depart from the YVR after 23:00. It will stay at the airport until 5:10 next day. So we can charge extra to the airline for that reason.

Here is my suggestion for the schedule aspects of the game, what do you think? I hope you can improve the schedule logic in the game because it’s crucial to the airport management. Let’s make this game better!

I think it would be a interesting balance if some airline contracts give you the option to schedule it differently and other contracts are more realistic as in you can’t change the schedule.

I it always nice to understand how it works in the real world but remember we are not creating a simulator or super niched game.

We want the broad mass to be able to enjoy this game as well. So even though it is unrealistic for a CEO or even the airport staff to schedule flights, in Airport CEO, it will be the player’s responsibility. We might add some airline preference that can have an economic impact. Reoccuring flights is alos something we will look into after release. Thanks!

Hi Fredrik,
It’s glad to see fixed schedule is an option for the future, good luck with the release!