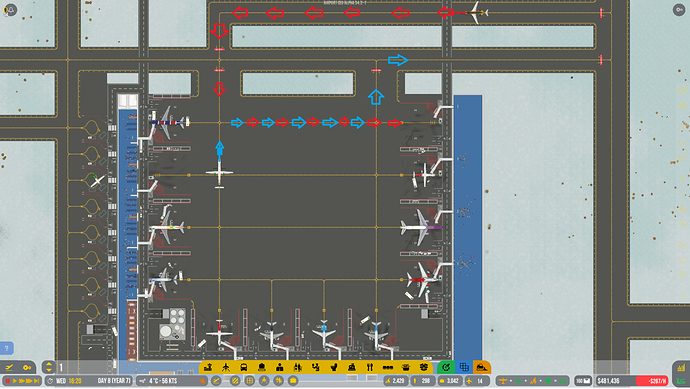 Airport CEO1920×1084 690 KB
. For example, in the picture attached, the aircraft with the blue path waits until the aircraft with the red path has passed it, which is really inefficient. I end up getting a lot of these problems and there seems to be no way to fix them. All my taxiways are one way and designed to allow for the best “flow” of aircraft. Let me know if you have any suggestions, thanks!
1 Like
sirhc80 January 24, 2020, 1:29am #2

Plane’s pathfinding/behaviour is a nightmare for ages…

For me, as a work-around, it works quite well, to build larger taxiways with multiple paths on it:

So here you can see one path without crossings to stands, for passing planes (to runway) and two parallel pathes to all stands.
Having no better pic at hand, I think the idea is clear. So planes having not only twice as much, as through crossings, there are multiple paths to any point, which solves this issues mostly.

Of course it doesn’t look nice, sometimes, when one plane is passing annother one, with overlapping wings… but it is a work-around, until system is working properly…

So at your airport, I’d probably make two pathes at the taxiways from/to runway(s), and three pathes at gate-entrance/-exit. And, perhaps, two vertical pathes from southern middle stands, up to path, marked with arrows…

use more one way roads

Thanks for the advice!

You need more one way restrictions. The path finding is the shortest route. Place one way restriction where the gate joins the apron taxi line so the aircraft can take the path you show. It will the go up the taxi way behind or around the other way.

To add onto @sirhc80’s comments, one of the things I do, other than provide multiple “streets,” is to reserve the most direct pathways for arriving planes. If you have longer taxi routes, create one-way pathing systems so that only the departing planes take the long route. When a plane has left the gate, I don’t really care how long it takes until take-off.

The idea, of course, is to minimize the amount of time incoming planes spend meandering around your taxiways. The quicker they get to the gate to unload, the quicker you can start your turnaround services and avoid potential delays.

To use my current airport’s example: 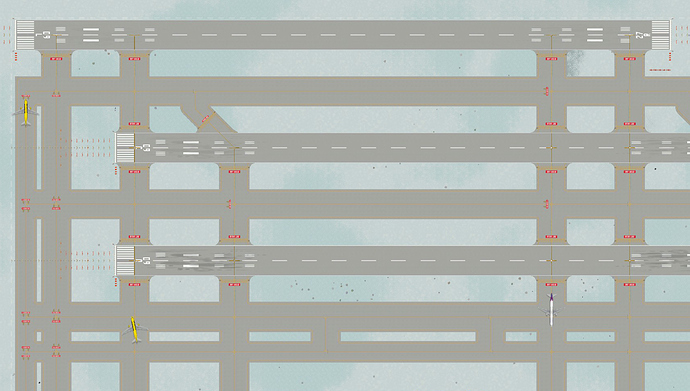 The far left avenue is one-way up to my far north runway. Planes coming in from right-to-left will use the more direct route which runs straight off the runway, limiting turns (at least for large planes).

Meanwhile, I’ve made the middle taxi lanes (between runways) one way from west-to-east (or left to right) only. I noticed if you don’t do this, by default, planes will favor taxiways that go AROUND a runway rather than take the direct route straight across a runway. That’s a huge time waste, so this is a way to limit that extra movement.

Now planes landing on the middle runway have no choice but to go straight. The gates are located below with multiple turn-offs and one-ways.

I’ve done airport layouts in the past with just one narrow taxiway surrounded by gates, and I’ve found for this game it doesn’t work all that well due to the issues you highlighted above. Planes sit for too long waiting or take inefficient paths.

Thanks for all the advice guys!

Not to keep an older post alive, but, in general, I’d recommend doing some quick research on how real airports are layed out. There’s often dual-taxiways but in particular it’s about getting incoming planes off the active runway(s). What we don’t have in AiportCEO is a Tower Controller who would be guiding the planes around the taxiways.

But, yes, pathing in general has been a blessing/curse regardless if it’s planes, cars, or PAX/employees. The one-way stuff helps. (Although anyone else catch the “incident report”. We might have to stop letting planes hit each other!)

What we don’t have in AiportCEO is a Tower Controller who would be guiding the planes around the taxiways.

Not that I want that job in ACEO, but I think there should be some more possibilities to steer the plane traffic. Currently we only have one-way signs, I also would like to have some (invisible) signs for controlling the right of way (by incoming direction, by size of aircraft, even by airline).
The taxi-traffic is still a real mess. The planes waiting for other planes that are still far away to pass, and on the other hand they just drive thru each other…

I would think we should have GA and commercial taxiways that we can select and program to let only small medium or large, GA, or commercial to pass through. That would be a good addition to the one way signs, and makes the airport way more realistic, (cough cough, having A380’s taxing on 3 wide taxiways).

I know it’s tempting to use one way signs all over the place to ‘steer’ your planes, but have a look at this post and the replies below and decide if you still want to keep them in high numbers. I agree that the ATC still can be improved (Beta phase) or that some micro management could be handy, but don’t forget it’s a tycoon game and not a simulator