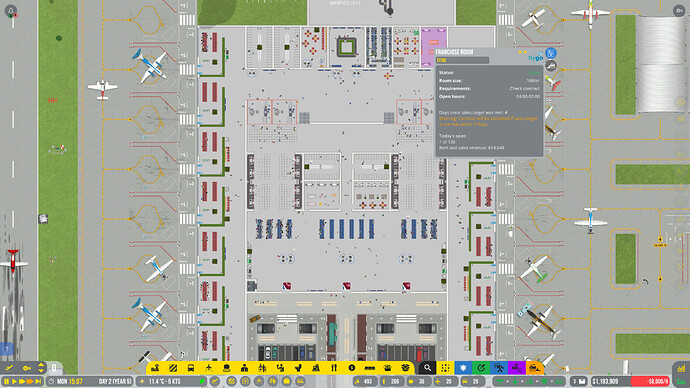 Hey, so this is my airport layout. Barely anyone is going into either of my stores. The one in security is selling only one or two things a day, and the out outside is selling slightly more. The restaurants are fine, but the shop inside security never even gets close to its quota. Am I doing something wrong here? I have 16 small commercial stands and my flight schedule is pretty much full.

I’m also having the same issue; and it seems worse than before the most recent update (which I’m aware contained some tweaks to shopping demand)

I am seeing this too with the most recent update. Restaurants very busy, shops - no-one goes into them.
The most recent shop site I rented out hasn’t even put any stock on display - I think they know it’s not worth it!

Yes, I have not had a shop contract renew in any of my airports in the last week even with 20,000 people passing through. I even changed the star rating when the contracts failed, but sales are in the single digits or 0 no matter which store or where in the passenger flow process it is placed.

Same discussion as on Steam.
Since a recent patch, the shopping interest depends on the airline rating. Passenger on a 2 star airline are less interested to spend money.

The issue is now on a starter airport with small airlines that shops aren’t really used.

I think it needs a rebalancing as long as you play with small airfields.

I agree with this issue. I dont fully agree that a lower star airline results in lower sales. Low cost holiday makers just as one example will likely take advantage of duty free products more than a business traveller.

My own opinion is that it should depend on general average ratings, a better performing airport should have more sales from happier customers.

I can see the current logic, but I find it too micromanagement to a minority factor

I have the same issue, until last week all shops had good sales. Then suddenly almost all sales stopt and contract did not renew, nothing changed in the terminal, same amount of pax and same airlines.
For now I just let the shops stay empty, I don’t take anymore contracts for them until I see the demand rising again.
The sales in the restaurants are not changed.

I as well have this issue. I have a range of airlines from 2 star to 4 star so far in my airport. Restaurants are always busy and active. Shops are only active for the first Open hours after loading the save. After that the store will have no purchases for as long as the session lasts. Saving and restarting causes shops to be active for a few hours then deserted.

I am looking into this issue!

We never doubted you for a moment

A fix will be supplied in the next update, should increase pax desires to shop a lot.