While migrating from an old, rusty and stuffed terminal building to a brand new fancy one, I used a public road tunnel for access to it below the taxiways. The plan on the long run was also to run the public road connection below taxiways to maximize the usable space for planes.

However, public road vehicles (cars, public buses, taxis) don’t seem to like my new tunnel. In fact, they seem so afraid of it that as seen as they enter the airport area, they immediately turn around and call off their flights…

I found similar issues here and on reddit, advising various techniques to build upwards and downwards tunnel entrances on either ends of the tunnel, but neither of the possible combinations of these solve the problem. Still no vehicle can make it through the tunnel.

I double checked, every bit of it, including the entrances are public road parts, not service roads. I ran out of ideas and decided to turn to the public before I go bankrupt

Sorry for the crowded screenshots, the area became a bit messy, that’s one of the reasons for the new terminal building. The bus seemingly entering the tunnel on one of them is really just using the implicit side connection of the tunnels (see this issue ). I have no idea how the cars in the car park on the far side of the tunnel got there. They are unable to leave now.

Could you check these;

Thanks for helping out

Removing 1 way arrows seems to have solved the issue. One-ways are not really working as far as I can see - vehicles ignoring them almost all the time. Should I add a separate entry for that?!

Route planning still seems quite odd. I marked the routes now used by vehicles, green arriving at the airport, red leaving. I understand this is not the most regular road arrangement, but still is not complicated.

Should I add a separate entry for that?!

You shouldn’t be. Just make sure to not add any crazy design around tunnel entrances and exits and things will be fine

What I mean is that one-way roads are in general frequently getting ignored by path planning.

What I mean is that one-way roads are in general frequently getting ignored by path planning.

Ahh, on your top picture there is road without one way arrows though (like that taxi is coming from opposite direction because there are no arrows on her road. I suggest you to build like this; 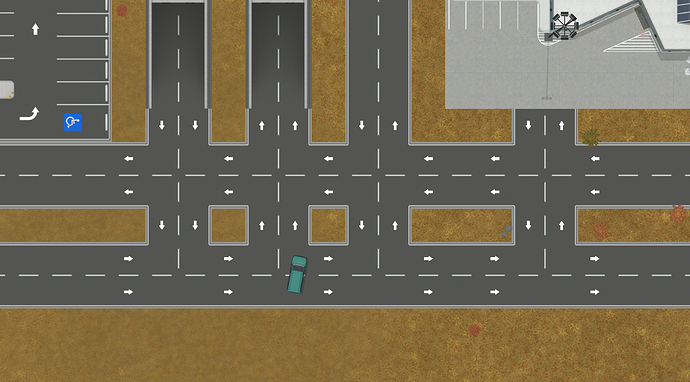