As many people will experience when expanding their airports to larger sizes, it starts to become a bit difficult when trying to assign vehicles to specific stands. Would it be possible to filter vehicle types by size as well such as large and medium pushback trucks.

And also the ability to sort stands alphabetically for example

I’m not sure if this is still up to date.
In Version 32 the scrolling for vehicle stands was extrem slow. - I had only 12 or 15 stands and it as annoying to pick out the right one. especially if you have to reasaign service cars to all stands.

The workaround is to use scrollbar instead of the mouse wheel.

Alphabetic sorting would definitely improve selecting stands as also filtering by size of the vehicle and not only by its type (e.g. I assign small baggage carts to each of small stands and a couple of big carts to parking lots next to baggage bays - it greatly improves speed of baggage operations there and doesn’t use the big carts for unloading baggage from small planes).

It’s additionally a little annoying that a newly purchased vehicle gets in front or middle on the vehicles list.

The workaround is to use scrollbar instead of the mouse wheel.

Negativ - in Version 32 i couldn’t catch the scroll bar because it was to small. Each time i tried i selected the car or exited the window.
Still haven’t try in Version 33

Just click and drag and it will move much quicker.

In Version 33 it works with dragging the scroll bar.

Would it be possible to filter vehicle types by size as well such as large and medium pushback trucks.

Might be a good idea to have a look at this in a later update. What I usually do is using the vehicle and drag it to what parking lot, depot or stand I want it to be at 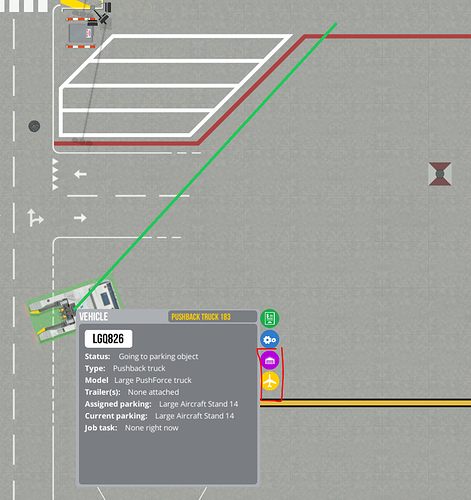 In Version 32 the scrolling for vehicle stands was extrem slow

This should be a quick fix, will have a look at it, will also change the color of the scrollbar.

What I was saying, in the current version, you can click and hold on any item and drag the list up and down. Not ideal but much quicker and easier currently.

Would it be possible to allow both a large and small pushback vehicle to park at the same large stand? Same with a belt loader and ULD loader. I tried assigning both to the same stand and only one would actually occupy the stand, the other would park in a depot. Helps cut down on turnaround time when you have both large and medium aircraft using large stands.

I reported a bug that causing large pushback trucks and ULD belt loaders not able to asign via the vehicle panel to Large Stands. (19302)

Would it be possible to have both vehicle filters and staff filters use checkboxes to filter multiple types at once?