Two Buses for each stands

We really need to assign two buses at the same time for each stand (yes, we can do that, BUT they don’t have a place to park and still running thru the service ways)

In fact, we need one bus to passengers who is arriving and another for departing. One bus is causing delays in all remote stand flights.

You can still have 2 buses service a stand. Just assign one of them to a stand, and the other in a lot/depot near the stand’s assigned bus stop. The bus assigned to the stand will always take the arriving passengers, and the extra bus from the depot/lot should be dispatched if the other bus is still performing a task. If the first bus is free, however, that one will get the task of loading the departing passengers.

I know there had been issues in the past where if you have that kind of set up the bus for the departing passengers would arrive at the bus stop before the bus for the arriving passengers, but I believe the devs said they fixed in (not sure if it is fixed in just the experimental branch, or all branches).

Regardless, I have always experienced that if you have a 2:1 ratio of buses to stands, the second bus should kick in, when necessary. Just make sure you help it along with the best route possible (shortest routes, with least amount of turns).

But I will also say I support being able to park 2 of both service trucks and buses on stands, as this can be useful in bigger airports, @Olof. 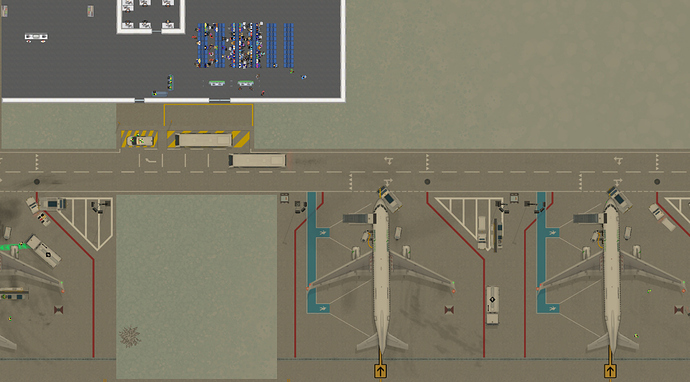 This is what happened when I went to two stands on a single bus stop… I staggered the flights a bit, but it immediately ended in traffic jams. Buses need to either be moving on a road, parked on a stand, or parked at a bus stop. The moment they’re stopped on a road waiting… bad things start to happen…

The buses also do not arrive at the bus stops in order of departure, causing earlier flights to have to wait until after a later departure has fully boarded

Do you have a bug report for this in place?

Do you have a bug report for this in place?

Me? No. There’s really no bug to speak of. It worked, just objects waiting for the object at their destination to complete its task and depart the location. It actually works fine per se. Even saw vehicles go around the others. I think I have the airport if you want it.

I would like to see two different types of bus stands. One for arriving passengers and one for departing passengers.
The departure stand is bound to one check in desk, the arrival stand can be assigned to one or more airplane stands.

With this method, you can easily separate arrival and departing passengers.

No, that’s too unrealistic to have two different locations. One of them would always be empty.
I do see that it should be possible to assign different buses for pick up and deliver pax from/to the plane, but they can use the same position.

I guess we might need to put a bit more thought into this again.
In real life, there are two ways to operate a bus stop.

a) the stop has a schedule
In that case, passengers to various locations wait up there for their correct bus, which will arrive at a given point and then leave shortly after that. Buses with no assigned jobs or out of schedule wait at a dedicated parking lot often part of the bus station. The bus stop will be empty of vehicles most of the time as they are there for only a small time window.

b) the bus waits for PAX and leaves when full
This is more like the overland stops. A bus waits for passengers to arrive and leaves the stand, when its job is done. This requires 1 stop per bus as it occupies the stop for a long time. This is, how it is implemented currently, I think.

So, if we want it to be more like a) and we are able to use more buses on a stop, the buses must operate like e.g. check-in desks. PAX will wait there after boarding remote and at a certain time they will be collected for their flight. Arriving PAX are simply unloaded and then the bus leaves again to free up the stop. In the meantime, the buses will wait at a service car stop or dedicated bus station - this might be a nice thing to have as we can sort out what parks where and what looks good.

This describes more like a bus-line situation.
For airside shuttle buses is the operation mode (that I observed in real life) that one or more buses are assigned to a arriving flight and one or more buses are assigned to a departing flight. They might be scheduled, but it is a very volatile schedule. And, AFAIK, they might ad-hoc add another bus or cancel a bus if more (resp. less) passengers are present.
I assume that the shuttle buses in real life are operated with a rough planning with flexible adaptations to actual needs, but that’s just a guess.
I also assume that if you don’t assign the shuttle buses to aircraft stands, this is almost the same behaviour in the game. Also just a guess.
Looks like the buses in the game do not have a maximum pax capacity, so in-game there is no need to assign more than one bus to the same task. (Assumption: they wait until all pax are on the bus before leaving.)
So one inbound and one outbound bus per flight should be sufficient.

Another guess/wish: placing a parking lot with buses near the stands and don’t assign buses to the stands should be sufficient. You might decide to spend one (or even two) buses per stand, but this should be a waste of material. In any case, the algo should be able to bring the pax from and to the flight without delay (if the stand is reasonably close to the terminal). But this also depends on the traffic situation which is another problem, specially since you have more kinds of trucks and cars on the road with the new services… I’m afraid we need some kind of traffic management tools soon…

No, that’s too unrealistic to have two different locations.

That’s what we have already: airside shuttle bus stop and aircraft stand.
So I understood Blutvogt’s proposing two positions at the aircraft stand. Maybe I misunderstood, but than I don’t understand the proposal at all.

Edit: I’m slowly getting to it.
Forget this above.

I understand now: two terminal bus stops, and we should be able to assign the buses to it.

Most airports that use bus for boarding collect people at the gate and drops them at the stand. When they pick up arriving passengers they often take them to a bus stop that is near passport control rather than where they pick passengers up from. This is v common.

Yeah, I got it now