This post turned out to be a bit more complicated and longer then i intended, but please please

@devs take the time to read it and see if you can do anything to solve the issues… preferably the 1. one (I have actually mentioned the issues befor, but now i have an idea what the problem might be

I have 2. problems with the map:

Furthermore the map seems to go wild with destinations in the Pacific such as Honolulu. 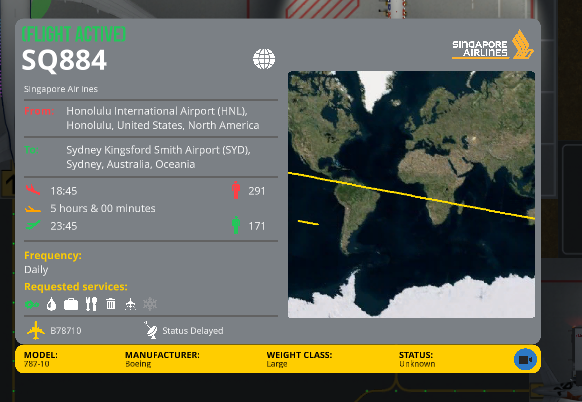 Honolulu is on the other side of the international date line. Could it be that the map has a problem with this line? now bear with me…
a. In a sense (seen from Sydney) flying eastwards over this line might be interpreted by the game as if the plane were to fly back to yesterday. This not beeing an option the plane would have to take the west route…
b. Seattle, Santiago and Bogota seem to be within the westward range of the long haul planes
c. On the other hand Honolulu is located on the other side of the international date line and out of the westward range of these planes so it can only be reached eastwards. Therefore this creates a bug in the map, it can’t seem to locate it properly.
d. The map also goes wild when there is an airport on the east side of the international date line and it has to fly to a westward destination that cannot be reached from eastwards i.e.without crossing the date line… 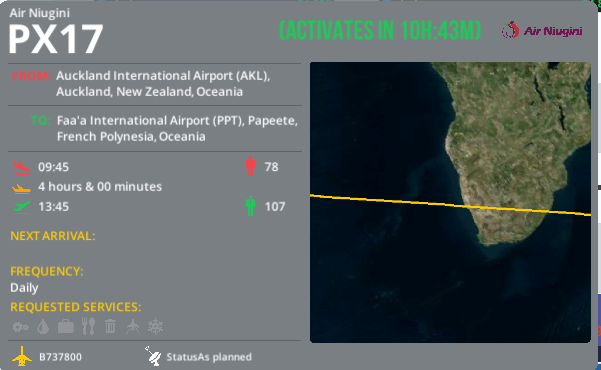 Could these 2 issues (the faulty destinations with turboprops and the unrealistic long routes/map localization issues when crossing the international date line) have the same cause. I would really appriciate it if you could tackle these issues, as i mentioned especially the 1. one

The ATR and Q400 case might be because there is no airport in the official range for those types. It seems the system ignores min and max length then and offers weird destinations like that.

Or there is an imaginary air tanker somewhere…

It must be the tanker

As I undertood it from our last discussion in another post…

I thought i wouldn’t get any offered flights from an aircraft type if there are no destinations in the range of that aircraft…In other words in such a situation ANZ would only offer me long-haul flights and flight with A320, but none with ATR72

In theory that would make sense, but may it does not work correct. Have you sent a bug report with your example?

99.9% of all of the airport’s I build are in Wellington, NZ and I’ve seen the same issues as you have with the map. That’s also the reason (soon™ to be released) my ANZ is split into a Domestic and International contract.

maybe the game doesn’t generate flights over the dateline?

Edit: I just noticed you already mentioned that stuff already with the dateline… I can read!!