I just saw that the devs posted a gif on Twitter yesterday! Decided to post it here since not everyone uses Twitter… The gif shows some workmen that are arriving at the airport. This could be the intro for one of the videos?

Edit: the purpose of this channel is now cross-posting social media posts of ACEO & Apoapsis!

… when time allows we’ll try to implement a system for automatically reposting the tweets here.

I am kinda pleased with the graphics., but in other hand I hope my shitty notebook will be able to run it.

Well, then that’s a good reason for getting a new one if it doesn’t work properly, isn’t it?

I am about a buy Dell laptop with GTX 980MX and 8Gb ram. Actually I did not have any plans of buying it. But when I got Prison Architect and ran it, I got a FPS of about 10-15. That was really Depressing. I couldn’t use the Fast forward button. And had to literally click the buttons 5-6 times (My mouse works fine). Everything in the game in slow motion. ( Or rather laggy motion).
That is when I realised that I would need a new device for Airport CEO.

Negotiations with my mom underway.

In case someone missed it:

Damn, I cannot wait for the video, it looks so cool, and I am going to fail this semester…

Thanks for reposting, it’s good to know that the devlog isn’t happening - means I’ll actually go to bed tonight!

That airport in the GIF is looking good!

Woah… Devs had implemented jet bridge into the game??

We have actually had jet bridges since quite long time ago. Right now we have two ways of boarding, walking directly to the plane and via jet bridge. In the future we also implement remote stands and airport busses.

Thanks peeps! Literally cannot wait until it’s time for the video. We’ll keep feeding you with some more .gifs until then throughout the week…

Are we gonna see the whole video in .gifs before it’s released? ;p

I hope not.
But still, these gifs are the only reason I am still patient. 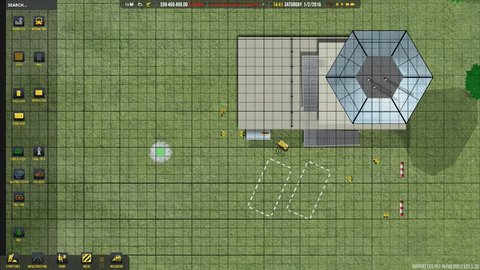 Devlog postponed until the first video releases. Saw this on Twitter.

Ai that’s not really good news.
I can imagine not doing development blogs for two week if there are some difficulties. But I think people are not gonna like it if they don’t get some good news or a video soon.

Ai that’s not really good news.I can imagine not doing development blogs for two week if there are some difficulties. But I think people are not gonna like it if they don’t get some good news or a video soon.

A devlog episode takes roughly three hours to make. Deciding topics, writing the text, compiling the .gifs, publishing it on all channels. Three hours is in terms of development a lot of time and for the past weeks, as a result of being swamped with work (Fredrik) and school (Olof) we decided to put those three hours into development instead of writing about the development which I think everyone in the end benefits from.

Of course there are problems, there’s always problems. The biggest problem now has been finding time where we can meet and record. That problem has now been resolved. In terms of development problems, the more software you produce the more bugs you’ll have but there’s nothing we can’t squash. Essentially, there’s no major bug or issue as of now that’s delaying the development, quite the contrary. In short:

Anyway, that’s essentially what we’ve been up to.

Haha, I though it was kinda nice to have it at random, as if they were planted by the wind or something. You’ll be able to choose that for your self of course though…