Hello i have an idea. The Realistic Boarding Feature.

Background.
Since we got the realistic international stand feature I’ve been thinking about this.
It is now time to share it with the you, and getting some more input and thoughts.

In game and with this feature set to on. For that individual stand, the de-boarding and boarding phase will be determined by how full the flight is.
For this illustration the number is set to 80%.

How it works.
If a flight is less than 80% full when arriving AND departing the de-boarding and boarding will behave like in-game today.

If a flight is filled to 80% or more when arriving OR departing an extra door and stairs will be used for de-boarding and boarding.

When boarding
For medium and large aircraft.
Seat X or above will use aft entrance, if entrance is used.
This numbers have to be figured out and balanced.

So the examples below will be used throughout the turnaround.

Medium stand with gate.
With realistic boarding on.

Flight A123 arrives with 95% passengers.
Gate to front door, stairs to aft door.
Passengers de-boarding from aft door will go up to the gate via stairs.
(shown later in this presentation)
Flight A124 will then depart with 50% passengers.

But since the flight arriving had 80% or more, the aft door will be used for boarding as well.

Big stand with gate.
No difference here because 2 jet-ways is enough.
So no need for changing anything here.

On stands with no gate, the same principle applies,
with the following formula.
1 stair truck = 1 bus.

Medium stand with no gate.
Flight B456 arrives with 45% passengers.
Departing flight B567 has 95% passengers.
So stairs to front door and aft door.
And since we use two stairs there would be two buses.
This would be for both de-boarding and boarding.

Big stand with no gate.
If less than 80% arriving AND departing.
Two stairs to the first and second door.
(not first and aft door like today)

If more than 80% arriving OR departing.
Two stairs to the first and second door.
An additional stair to the aft door.
Again 1 stair = 1 bus.
So it will always be two and a maximum of three.

The gate stairs
So one thing that needs to be added is the gate stairs so arriving and departing passengers can reach the aft door.

And I propose adding a little building where the fixed and movable part of the Jetway meets. In game it will work like the elevator does in A35. No moving parts and nothing visible. The passenger goes in on the ground floor, and “spawns” at the gate entrance and vice versa.

ACEO IDEA3017×1169 1.1 MB
So in this picture I imagine that the black box is a building.
And the round joint where the fixed part and the movable part of the gate meets, is moved forward.
The light can still be there it will just be on the roof instead (no pole).
And where the arrows are, is the entrance from the ground floor.
I think adding a small roof will be a good idea to “hide” the entrance doors"
Then add that blue walk path that is on stands with no gate already.
And thus passengers using aft door can go up to the gate.

Also I want to point out again, that it needs to be a per stand toggle button.
Because activating this for 20-30 stands at once will not work.
But for simplicity in coding I believe it should be a fixed number.
So the feature is either used or not used per flight (arriving and departing from the same stand).

What now? How?
Well here is what I do know.
We already have most of the features.

We have busses.
Depending on stand zise one or two arrives.
Putting one more is doable on both medium and big stand.

We have stairs that uses front door of medium aircraft.
We also need for aft door.

We have stairs that uses front and aft doors of big aircraft.
We need for the second door also.

We have the possibility to move people from one floor to another.
“Elevator” in A35

Big stands with two jet-ways we have.

We don’t have
Stairs that goes from the gate to ground level on medium stands.

Code for determination what entrance the passenger should use.
Should be doable.

Thank you for your attention.

Only ramp agents use those stairs from the jetway as well in real life. A bus normally takes the passengers from the stair out to a remote bus stop for arrivals so it has full segregation.

EDIT: There is stairs? They are right next to the “black box.”

@Blackout The stairs (looks more like a ramp to me but probably should be stairs) are in fact those only used by ramp agents in reality. The feature request isn’t about those stairs however but about a building at the black rectangle and having stairs inside the building for passengers. That’s something pretty common at airports to use jetway stands for bus boarding of remote positions.

This current boarding gate concept may appear in US airport

I know. That is correct.
That small stair that is physically going from the gate and down is only for staff.
But here is what i mean.
Not great pics, best i could find from Copenhagen airport. 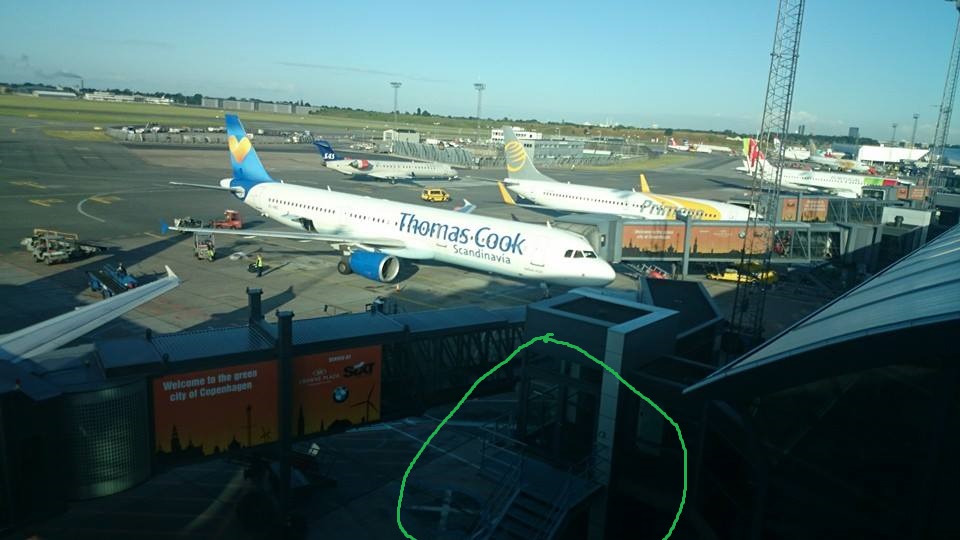 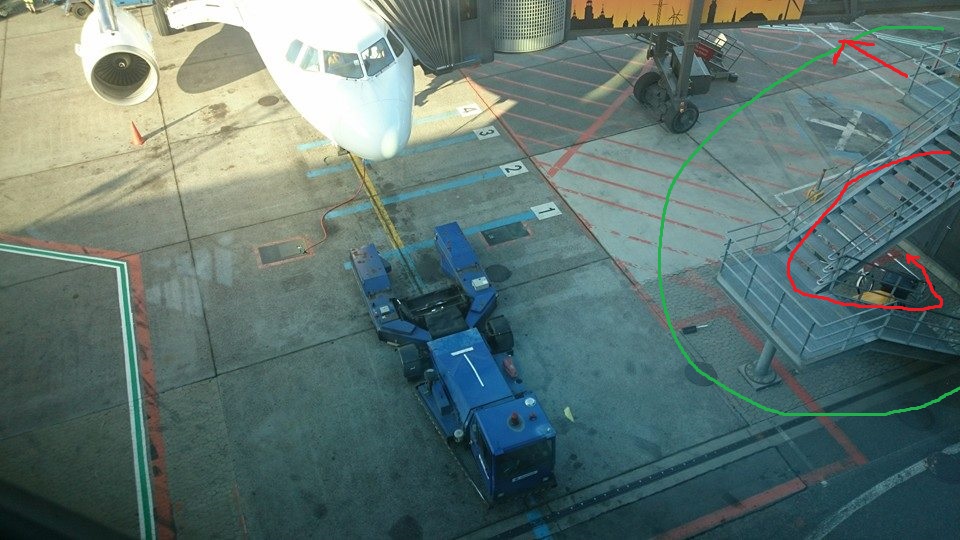 But instead of having the stairs outside, i suggested to put them inside, but both ways works ofc. 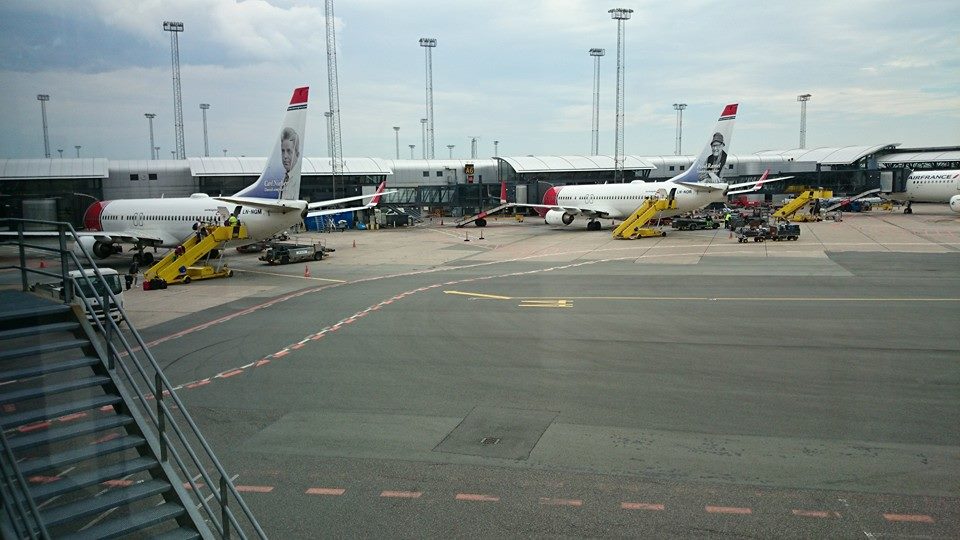 This is used on extreme cases when there are no free parking spots on airport and flight is paid for remote stand (jetway stands are more expensive) or flight is international but terminal is domestic. As I said this is extreme cases and it happens on only couple of airports.

I do agree that boarding is to fast in game at this point. Because they don’t really cue properly yet.
You mean a second stair in addition to the gate?
I just know it’s commonly use in Copenhagen airport, don’t know about other parts of the world.

Because they don’t really cue properly yet.

Not that, on jetway stand and on remote stands PAX spawns/despawns airplane too fast with groups. In reality only a few people per minute should be able to leave airplane.

You mean a second stair in addition to the gate?

No I mean on remote stands. Currently large airplanes have 2 stair trucks in service. However medium ones have only 1

I think Prague airport has steps at the airbridge that are in use by passengers (if my memory serves correctly - I didn’t use them myself). They aren’t the narrow, flimsy, steep steps that you usually see, though. They’re covered steps that appear to be more suitable for passengers. 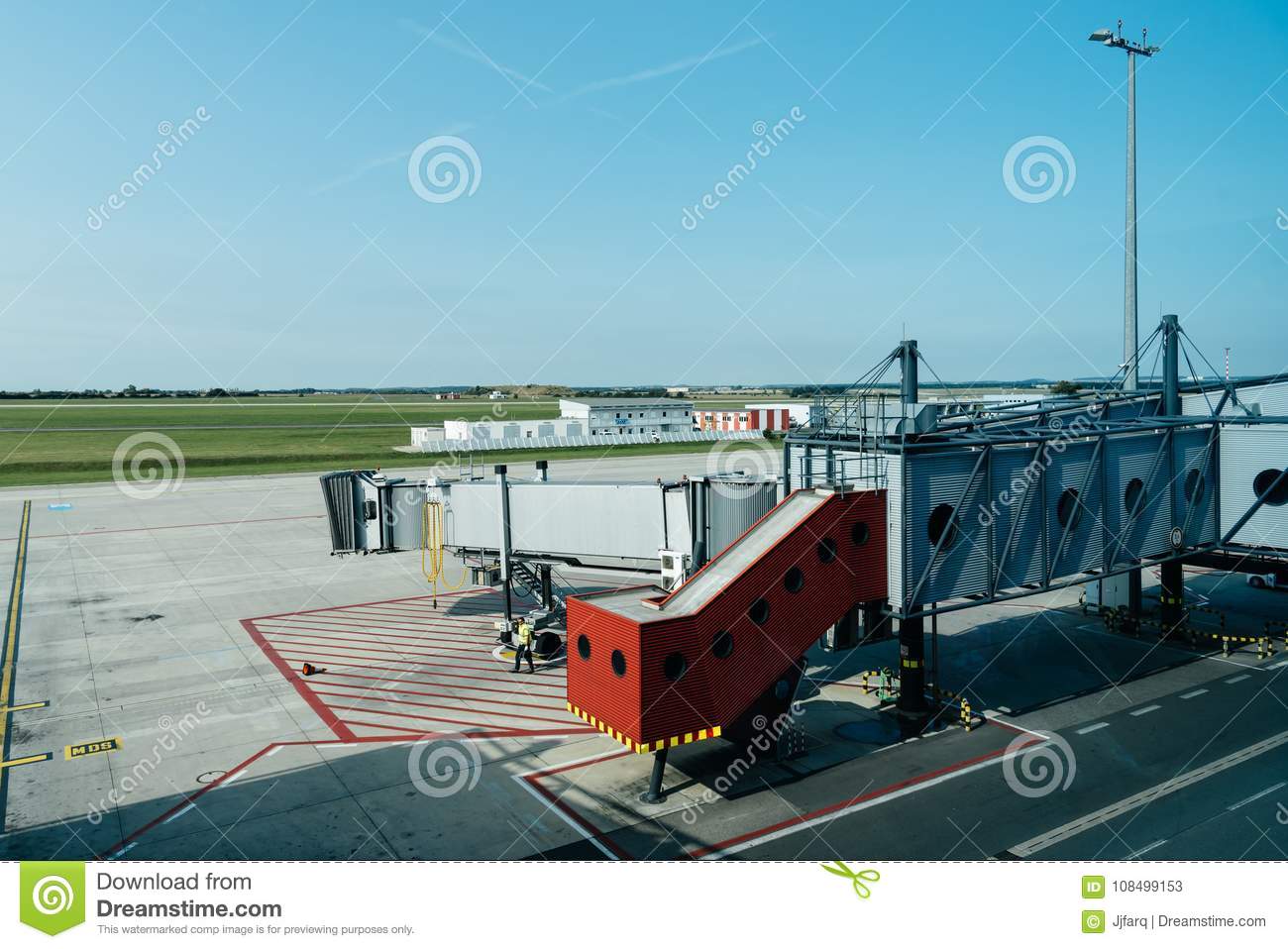 1300×958 129 KB
Apparently this is Prague, but what I remember was slightly different. Seems like a similar idea though - the red bit seems to contain stairs that could theoretically be used by passengers (note they are distinct from the flimsy steps at the end of the airbridge, used by ramp agents). It’s an unusual set-up: you normally have a flight of stairs inside the building for pax use. But it’s a theoretically valid option, that would work without too much user intervention.

I wonder if the solution here could be to redesign the whole boarding and disembarking areas, however. With segregation now possible in the game (albeit far from perfect at the moment), maybe we do need the ability to create boarding areas in a bit more detail. You usually have a small area at the end of the airbridge, where passengers can be directed to where they need to go. At it’s simplest, this allows arriving and departing passengers to use the same area at separate times without mixing. But this could be made a bit more complex as needed - departing pax could be directed either to board the airbridge, or down some stairs. We could maybe even use this to create stands that serve both international and domestic flights - for example, international and domestic arrivals could be signposted in different directions, and the same airbridge could be accessed from two different areas to create a flexible stand that can serve domestic or international as needed. This does happen in real life - eg at Heathrow, some stands in the new T2 can lead disembarking passengers either to international arrivals (where they clear passport control) or domestic (where they don’t).

Yeah, all this would be possible, but for now i think the boarding can be improved and like you said “Having a stair down to airbridge stands could also mean that aircraft that don’t use airbridges (like the ATRs) wouldn’t use them.” Is a good example when the stairs should be used.

And nice picture, i bet that red house is stairs for passengers.