Hi! Just picked up the game and loving it so far.

At the moment I’m working through the tutorial and I’ve just passed the building emergency responders stage.

One problem I’m having though: My staff’s energy seems to drain really quickly. Like, going from full to zero in an hour or two. As a result their productivity takes a big hit. That seems a bit odd to me.

I’ve watched security gate staff, for example, start a shift at full energy, only to check back later after an hour or so and see they’re all the way down to zero energy. I can watch their energy draining as they’re working and it seems to deplete steadily from full to zero in about an hour or so (maybe two).

If this is a bug, I have a theory as to the culprit: My monitor is natively 144fps. I know that’s caused issues with other games (e.g. Skyrim) in the past.

Otherwise, I’m not sure what’s behind it. I’ve got staff bathrooms and a staff room all functional and usable nearby, and staff use them as expected and recover their energy to full before their next shift.

One solution that helps with other games is being able to set a max framerate, or using borderless windowed mode, but unfortunately I don’t know if that’s possible with this game at the moment (if it is please let me know!).

Of course, if this is something that gets addressed further on in the tutorial, my apologies!

Hello and first of all Welcome, 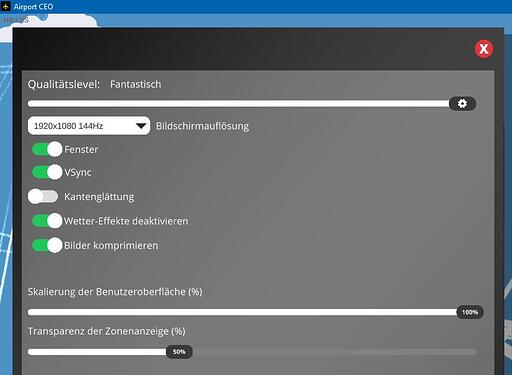 With that i have no problems like you describe.

I’m not sure but i think it’s not a problem or a bug of the tutorial.
At the moment i don’t know what the problem could come from.

This sounds strange, as DomiWi points out we have had multiple players who’ve run the game with 144 hz monitors and it should not affect the executable state of the game in any such way. If you want to limit the game’s FPS you can enable VSync.

Have you hired talented staff or trained them at all?

I am looking at this issue now, do you have a really low amount of persons at the airport? If so 1.0-24 will probably fix this problem.

I’m still working my way through the regional airport tutorial, so it’s been pretty slow I suppose? I’m glad to hear it’s being looked at, though; thanks for replies!

I started a new sandbox save to try and experiment a bit with hiring lots of (relatively) high skill staff.

For security gate personnel, when the shift change happens, both the outgoing and incoming staff work the job for about ten-ish minutes it looks like - they even stand in the same spot: 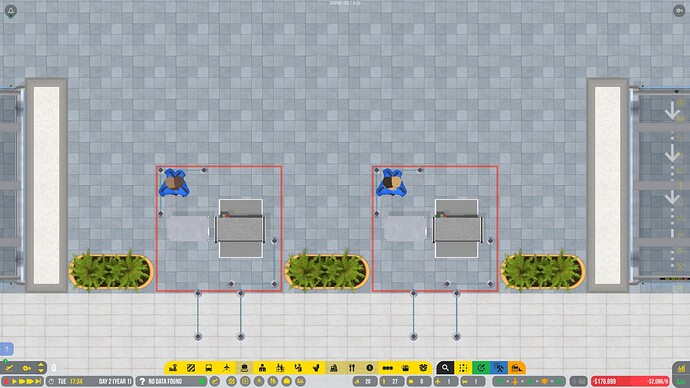 Here’s where they’re at immediately after switching shifts (time is 17:49): 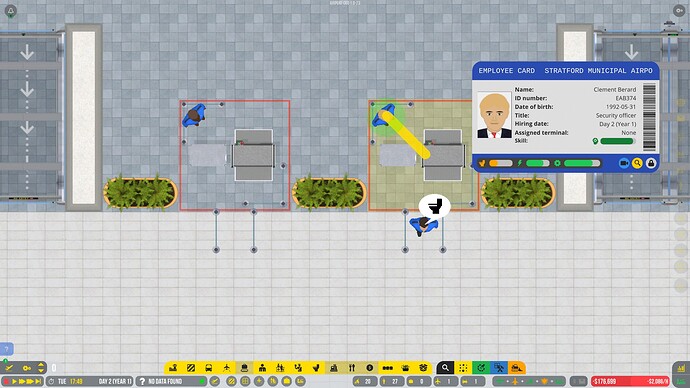 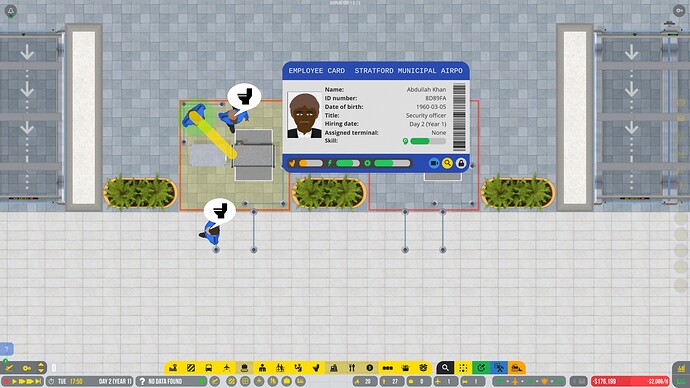 About an hour later (18:42), they’re completely empty on energy: 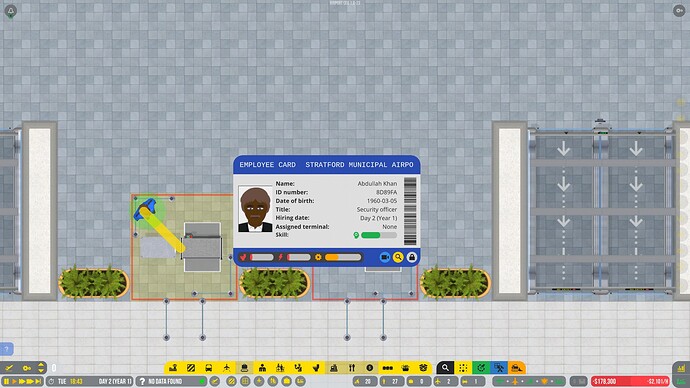 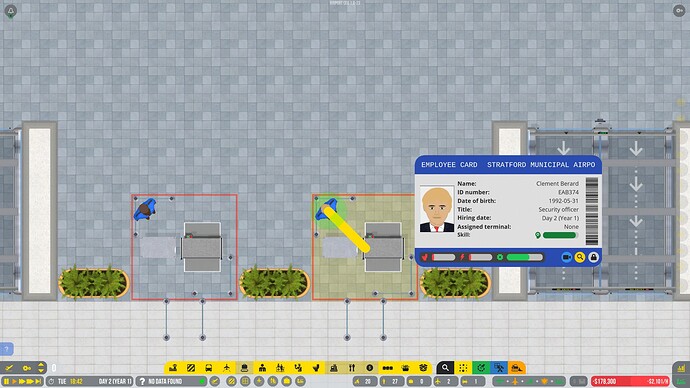 It’s the same problem with passenger service agents at the information desk. They make their way from the staff room to the desk around 11:32: 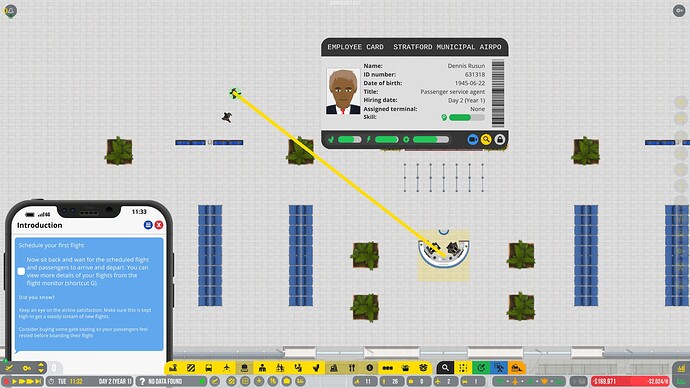 They do the same both-shifts-working-at-the-same-time thing for a little while. When the previous shift leaves, it’s 11:49 and they’re down to about two-thirds or so: 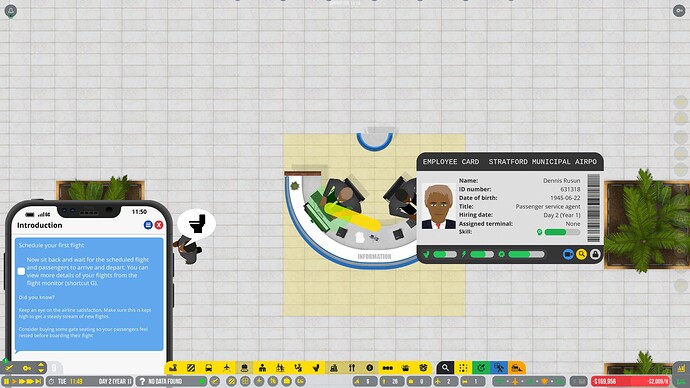 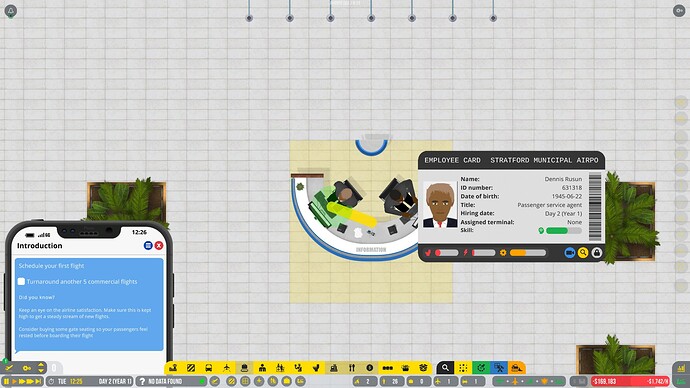 With my administrators doing R&D, it seems they never stop working and so they’re always at zero energy. I’ve tried taking one or two off of whatever is being researched so not all of them are being utilized at a time, but it seems they keep “working” even if only 4 of 6 are assigned to a project: 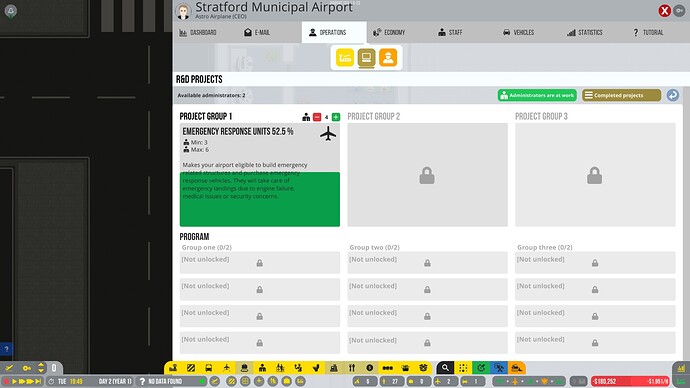 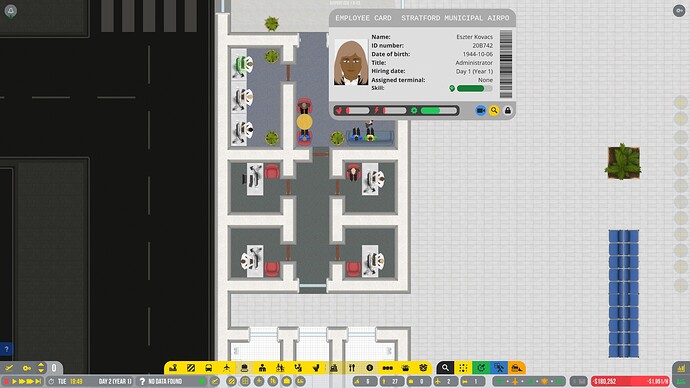 Anyway, hope this helps! Looking forward to the new patch!

Try the new update on the experimental branch and see if that improves it!