[Solved] - Planes not landing any more

I’m a beginner on that game and I’m following the tutorials, after finishing the first two I decided to play a bit with thing trying to get used to the game before starting the international airport tutorial.

Everything was going great my flight schedule was full, planes where landing and departing as intended both GA and commercials. And one morning everything stopped, the GA planes that were on the ground departed and nothing else happened.

I was greeted with dozen and dozen of the following message for the commercial flights : “XX123 cannot land as stand (YYY) is still occupied or about to be occupied by a previous flight!”. All my boarding desk state “No Flight Scheduled”, the check-in desks are working as intended, security too. All flights on the Flight Planner are green. All commercial stands are empty.

I currently have 7 stand dedicated to commercials flights and 6 to GA. The last two things I did before that happened were disabling some notifications that I don’t need at the moment and modifying the aircraft ration in the Flight Planner (setting the large aircraft to 0% as they are not here yet).

I tried to set everything back as it was without any luck. I’d be happy to give any in fo or screenshot if needed.

Hi… just wondering are you on the experinmental branch

No I’m not I installed the game a few hours ago. I did not want to try anything experimental before getting used to the game.

can you provide a screenshot of your stands and flight plan

Maybe strange question, did you open your Runways?

I forgot last game I started.

I only took a screeshot of one of each GA and commercial stands as they all are the same except for the condition (all in the green).

NB: on the stands screenshot on the bottom right the money isn’t right, its a bug when you restart the game after having saved and quit in pause, just unpausing the game get everything normal again. it have nothing related to my problem.

oh, due to being new on forums they dont load. 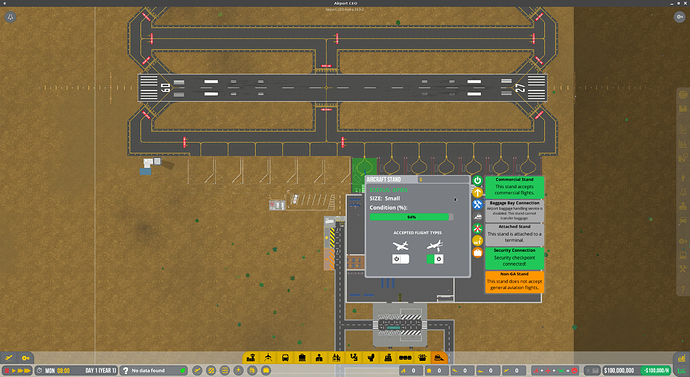 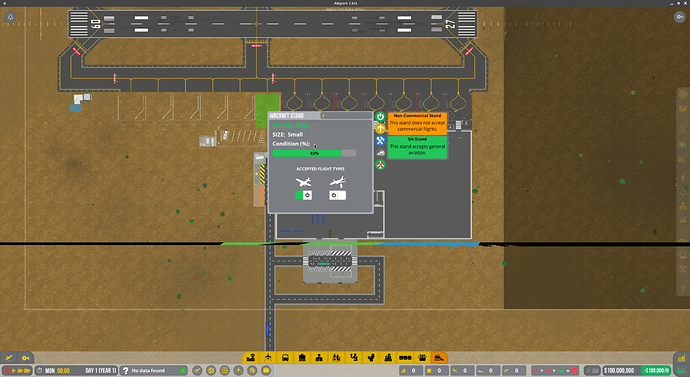 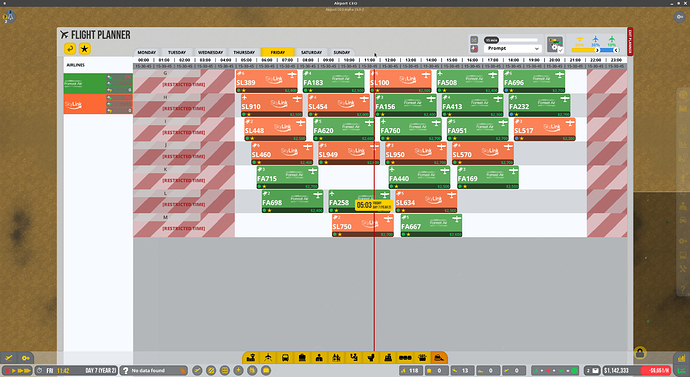 What do you mean? I can see them and used a simple link to as external website and not using the internal image upload. I’ll try to see what I can do.

I did upload them for you

New members have a image limit number on forums.

Can you click a runway, and see if you have a queue count on them?

Run away are opened.

It is to limit spammers.

Ah, you have them in queue. At least the game created the planes.

Weird suggestion; what if you save the game, and then reload it?

That’s what I just did to take screenshots, I saved and quit the game, but i didn’t unpaused yet. and that worked. Planes are coming in. I still don’t understand what caused that bug.

Yeah, sometimes the game stalls on something small.

Maybe still do, and how you resolved it

I will take that to bug repport. And also the the money thing after restarting a paused game.

Thank you for your help.