Could you perhaps share some more details? Does the game in general crash, or is it linked to particular savegame? And if it is a savegame, can you show some screenshots? Does the game actually crash, or does it freeze and recover after a while? Are there any issues in your airport, such as a high number of PAX unable to find a route, that could be causing the crash?

You can also send your log files and/or savefile to support@apoapsisstudios.com so the developers can have a look at it.

This will be the same pathfinding issue i had, pushed all 6 cores to 100%! Found it was caused by pax trying to route to a toilet or shop on a different floor that was being blocked by a wall etc.

do you find the solution?
because my airport is huge already

it freeze and recover, but if i do another thing like play music, it crash
i use my own savegame
and yeah, i have high number of PAX

Then it is likely caused by some issue in the pathfinding like Artik said. Next time you load up the airport, pause the game/simulation and check all routes. Are all zones properly connected with each other?

I had an annoying one last night! After the last update I had to rezone my entire airport haha! Oh well fun times.

all my zones are now gone, too and I have to recreate them.
But since that my game, which nerver really lagged before is now a Dia-Show. I think because of pathfinding without zones, too.
Recreat this with THIS lags? whoa, that will be “fun”

Is your page file set to Dynamic?

In anno 1800 lots of people have performance issues due to it being set to a fixed size. 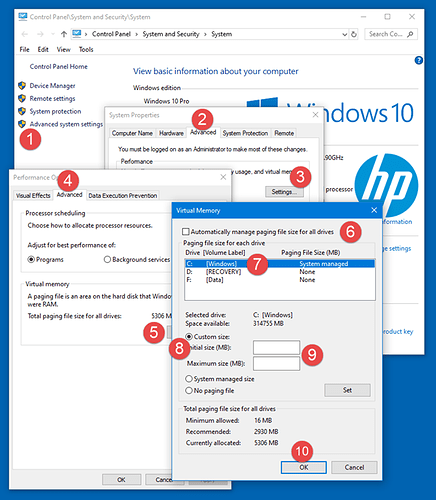 If you see Your system is low on virtual memory message, when you try to start memory intensive applications, increase page file size in Windows 11/10.

The missing zone issue should be fixed on Alpha 35.5-1, however if you saved your airport with Alpha 35.5-0 those zones will have to be rebuilt.

ACEO for sure has a set of various bottlenecks when it comes to pathfinding and stuck persons, however this is something we’ll primarily look at in beta as if you build your airport correctly you shouldn’t have those CPU spikes… at least we’re not seeing any widespread reports on CPU issues right now.

I replaced all zones and now it is back to normal. Thanks guys!