Since returning to ACEO in beta version I recently thought of a trick I did in one of the earlier alphas before even R&D, which was to place shops and restaurants before security checkpoints. The reason I did so was that some passengers would arrive way early so I thought I’d give them something to do. However, back then, sales from shops before security was horrible compared to those airside, and ended up in me failing every contract.

Can anyone tell me if shops before security checkpoints get good business, and how the amount of sales compares to airside shops and restaurants?

PS additional support required: it appears that shops always get way less sales than restaurants, even if both are of the same size and rating, anyone can help figure out why? For context I usually design airports in such a way that there is one shop and restaurant immediately after security per terminal and everyone has to walk through either in a two-wing design with a central check in

While I haven’t played with shops before security, I can tell you from experience that this is heavily dependant on how many flights and people are going through your terminal.

One medium aircraft will have between 50 and 100 pax, so presuming you have a 10-stand terminal, that will be an avg of 750 pax going through your terminal every 3 hours IF all stands are occupied and an avg of 6000 pax per 24h (if you have night flights on).

Of all these pax, only some will use your shops/restaurants - you’ll have to figure out the percentage yourself as each terminal and path is unique.
If 25% of pax used these services, you’d be looking at 1500 pax which, at about 250 needed sales per good contract, would be good for 6 shops.

I would recommend you figure out your current percentage, analyze what paths pax take to see if you can further optimize it and scale from there to meet your contracts.

I’ve build shops before security since beta 2. The effect was still less then beyond, but 2 star contract are very doable, even on small airports with 2 medium stands an 5 - 10 small stands.

I guess it’s fair, beyond security the shops are tax free, so that sounds more interesting for a costumer. Next to that(probably not implemented) but people can bring there own stuff to the airport (bottle of soda/water) but the cannot take them beyond security.

I see, never thought about it that way, thanks for the help!

Does the R&D “marketing” affekt this? It states it “rises the amount of money people are spending in shops and cafes by x %.”

I’ve done shops before security, in all of my airports. In Sydney International my local airport, we have shops in the Arrival section of the Terminal. So I use this as inspiration for putting shops outside of security.

As for amount of people that pass through, it depends where you place it. I usually place it in the area where passengers first enter / leave the terminal, near the escalators to the Metro.
When I do this, it does much better then even the shops inside the security area, given you are handling both incoming and outgoing passengers.

Not sure about that. I usually place them in between te waiting area and check in desks. If possible, depends on the layout, that is also the place where the people come back to after collecting there luggage, optimize traffic

I’ve put cafes in the Check-in area in all my terminals. Shops didn’t cut it in small terminals prior to A36, but have since. I use a 1* cafe and 1* shop with 54sq.m footprint in this terminal (6 small stands, 1 usable medium stand) and targets met every day… 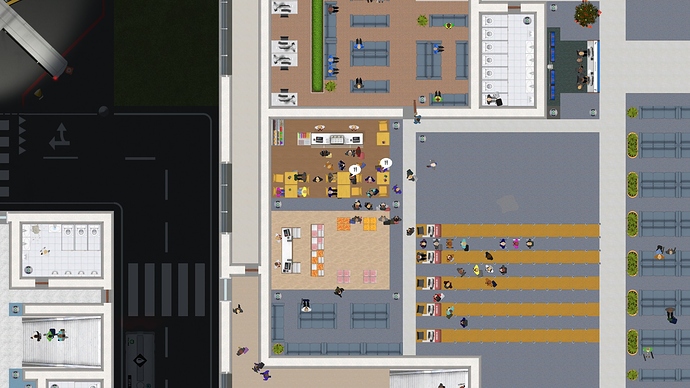 I use similar in a terminal with all-medium stands, using 2* cafe and 2* shop on a 90-100sq.m footprint, but don’t install them until I have at least 4 stands in use, as the PAX throughput doesn’t give them enough custom until then.

Thanks all for your input! For reference I have one shop and one restaurant per terminal in all airports that every pax will have to walk through.

Anyone have any idea about restaurants making more than shops tho? My restaurant always makes 2-3x the sales as my shops of the same rating at the same foot traffic. It seems that many passengers browse the shops but never actually buy anything