Service truck shortage. There are plenty of agents and trucks

I’m experiencing intermittent (but often) issues loading baggage onto planes. Sometimes planes are stuck on the stands waiting for baggage for hours. They would sometime get that baggage after long time and sometimes I would need to dismiss them manually. There are also a few peculiar, perhaps related, things that I observed.

First, let’s look at this screenshot. You can see two planes awaiting two bags each:

At the same time (see timestamp), one of the planes in question (GW528) remains on the stand with a orange status 0/0 bags. See following screenshot:

Somehow, the loading of baggage on these planes is not among of the Employee job tasks (same timestamp):

Vehicles also don’t have any related tasks (I also checked vehicle tasks without a status. Also note that there are plenty of available vehicles and ramp agents):

Later I had to dismiss these two planes manually. Below is the last image of the flight monitor for one of the planes:

Then I went to make notes about other similar situations and here what I observed shortly after the above incident. I also occasionally checked if the cargo bay has appropriate flight registered. And I have not found them. I’m not sure if it is related.

I checked the cargo bay, and the employee and vehicle job tasks. I didn’t find anything related to this flight either:

All other symptoms were the same as in the first case until the following:

Please observer carefully the service truck. It finally arrived. But with one unidentified bag instead of 3 (indicated on the flight monitor, see the corresponding screenshot above) which belonged on a Maple flight. After this the plane has successfully departed on its own.

So, at this point I got completely confused and decided to ask for help. Please advise what could be done.

EDIT: Long after this post I noticed that I have 7.5 thousands bags in the system. Is that even right or relevant I don’t know.

P.S. Sometimes our systems play evil jokes on us.

Is it just me?.. I dont see screenshots.

I think he forgot to upload them.

You can only upload so many photos from a new account. That’s one of the limits I’m afraid.

True, but most will just try and embed in their posts. Several have done otherwise though I agree.

When possible please show your whole airport too.

For some reason @Apoapsis was a bit harsh when you posted this topic. I’ve unhid it now but sadly no pictures got included as they were denied by the server, can you upload them again if possible?

Otherwise you can drop me the issue number and I can have a look at the save.

I have included picture into the OP as links. Please let me know if you can’t see them.

Let me know if you need that save. I could DM it or something.

Let me know if you need that save. I could DM it or something.

Use the in-game bug reporting tool and it should automatically get reported to us, that’s the way we prefer it!

EDIT: New bug ACEO-7276. Please note that the number of bags I see now is much lower when it was at the time of the problem. I don’t see the baggage problem yet, but the truck shortage is already there. It may require some time to fully appear. You may need to run it for a bit (all things autonomous). Also, note that I used official version 28.4-1 when I saw the problem.

EDIT: Just a warning - the airport is quite big and might be laggy.

Also, I see few other things that might be related. Occasionally notifications like “check-in desk is not connected to a baggage bay” popup. See below. There are bags on baggage bay with tag UNKNOWN. The number of bags is gradually increasing, which I think is not good. 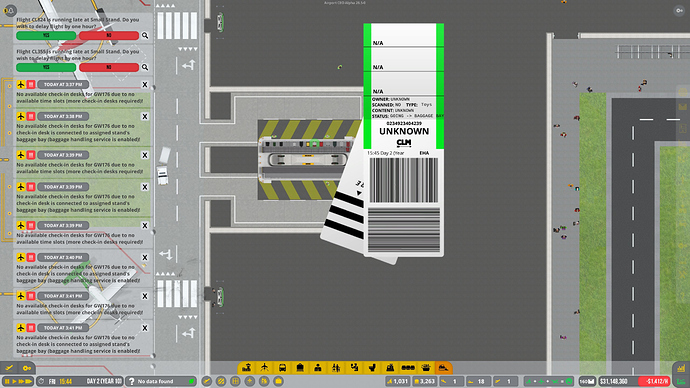 Latest and most likely last observation on this issue. I loaded my last save into version 28.5 and ran it unattended for about 1-1.5 hours at triple speed. The baggage size grew over 8000 bags, while number of passengers averaging at around 1000-1100 and number of planes on stands at about 15. The game became very laggy (almost like a slide show) consuming all available CPU.