Security Checkpoint is not operated

I’ve yet to get a passenger to my plane, not through lack of trying (Steam says I’ve been playing 17 hours)…

After many issues trying to get things up and running, I’m now stuck on Security. This is what I’ve got so far… 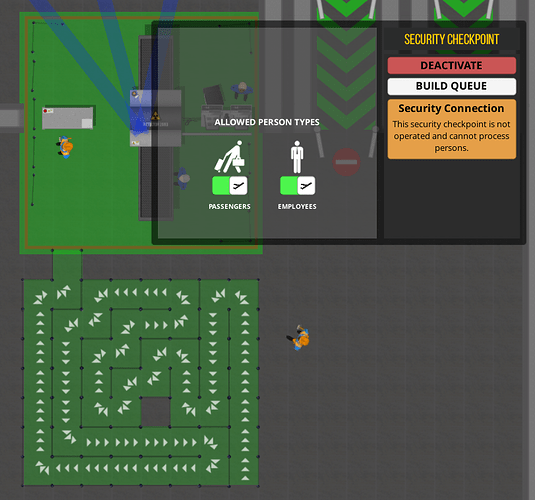 I have a security desk, which should accept passengers and staff. I have employed two security staff, and they show blue lines to my stands. Each stand has a green “This stand is connected to a security checkpoint and can transfer passengers”.

I have zoned the everything up of Security with the Security Zone. I have made sure that the tiny but under the wall is also marked with security zone

However, I still can’t get my passengers through security. It’s probably something very simple that’s being missed, any ideas or suggestions?

Ah, knew it had to be something simple.

If the dev team are taking suggestions, how about some kind of message to say it needs four security staff

Yeah… there used to be a UI symbol for it but it’s missing. We’re working on a fix for all of those issue but apologies are in place, there’s no way you could have know that.