I think the current flight scheduling is tedious, repetitive and unrealistic.

Here is how I would do it. Instead of it being contracts, I would make them deals (kind of).

So, say you had a small and a large gate. An airline would contact you saying ‘We’d like to set up a [daily/twice daily/weekly] route to (undefined).’ Then the airline would give its requirements. From as specific as we’d like 1 flight on Monday Morning and 1 flight on Thursday Evening to as unspecific as we don’t mind when you place the flight, just let us know. Then you’d fit that into your weekly schedule. Airlines would pay you for the airline fees (As in the fees panel).

Then I’d have Airline Satisfication, based on Passenger Happiness, Security, Facilities, Upkeep (Cleanliness, Repairs), Decor, Baggage, Fuel, Access, Quality of Staff, Franchises, Timeliness etc. An unhappy airline might pull out of you airport (only coming back if your airport gets a good reputation (average of your Airline Sanctification Scores).

I would also change the Check-in desks so you assign a desk to an airline, instead of an individual flight. It doesn’t matter how many check-in desks an airline has, but if they keep getting late passengers then the airline sanctification would drop (Due to Timeliness, Facilities and Passenger Happiness), however if you give them too many, it costs the airport money to upkeep the staff.

You could also assign airlines a baggage claim area (like with the staff rooms assigning types of staff).

Eventually, an airline might want your airport to become a hub. This means you assign them gates, baggage claim areas, check-in desks and lounge areas and the airline will automatically fill in the flights, based on their routes. Instead of a flight by flight basis, the airline would pay you ‘rent’ to use the terminal and the runway.

This needs to be a thing now!

some excellent suggestions there, I agree with all points raised.

While this has nice points, they have all been suggested before. Kindly use the search button.

Do you know what, I actually had the very similar idea 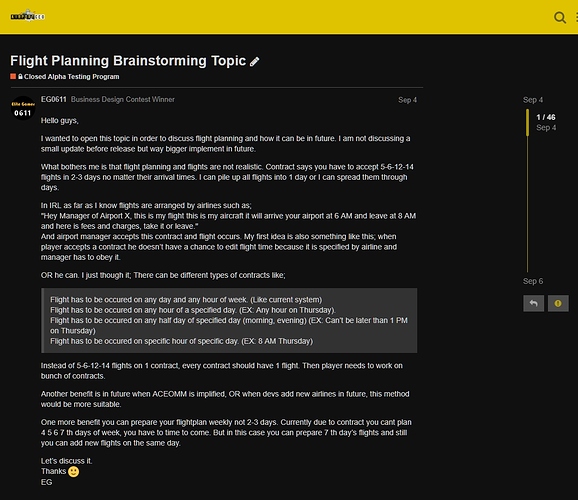 Nearly everything has already been suggested somewhere.

Ideas for more realism: Slots. A slot is a combination of a certain time of the week (e.g. Monday 7:00 to 11:00 or Sunday 21:00 to 6:00) and stand. Slots have a fixed length that depends on the aircraft class; with special handling for overnight slots. You can create slots on a stand through drag and drop in the flight planner. There are two slot types: “Assigned” slots are filled by assigning an airline contract to it. “Open” slots are filled automatically with charter flights (similar to …

Nice you bring it up again; posted myself somewhere too. Would like to have “Master Contracts” with an airliner, and then “deals” within the contract that you can pickup by choice. So your airport could chose to serve 1 master contract or many, but that would be more difficult to maintain satisfaction wise. We will see what the GMs come up with.

I feel like to meet some requirements for contracts you should be required for a certain amount of gates yet, and such.

Yes! I agree with everything here. The contract system as it stands is tedious and unrealistic. But I have faith that additional tweeks will come as time goes by.

I would add the ability to have gate changes when things star getting backed up. then you could keep a couple as flex spots to take the pressure off while you work out operational issues.