Runways need more love. As of A36 (experimental), there’s not many options for runways, just large, medium, and small, with no way to extend or shorten the size of it, like there was before the Big Bird update (BBU). I will talk about a few things, the runway itself, displaced thresholds, and blast pads, as well as a couple of other small features that can come with this.

The runway is fine for basic airports, however, they feel short, and do not seem like they would suit some of the traffic it handles, for example, an A380 usually does not have the same braking power as a 787-8, however, both require the same amount of room. Same thing with takeoff. I would like to see something similar to the runway extension options we saw in Pre-BBU, maybe even with an option to remove runway length.

Blast pads are at the end of the runway and cannot be used by aircraft for any reason outside of an emergency. This, like Displaced Thresholds, can be extended as some sort of runway upgrade. EDDF has a very long blastpad off 25C. 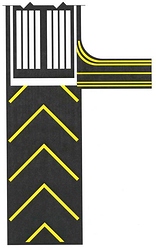 These are more minute details that can be added. I do understand that some of these will be challenging to code.
1). Aircraft Weight
Aircraft Weight can do a couple things. The heavier an aircraft is, the more damage the runway takes, this can be counteracted with stronger infrastructure (ie Asphalt, Concrete). This can also affect the amount of runway a flight consumes during takeoff and landing. This can also tie into No. 3.
2). Winds
Winds do exist in game, however, they don’t really have an effect on aircraft. You will have a direct crosswind of 57 knots (yes, it happens, very, very often) and the aircraft lands as if there was no wind. I’d like to see a 737-800 battle a 31 knot crosswind. This may also play into No. 3.
3). Overrunning Emergencies
Runway overruns can happen for many reasons, weather the wind, or an airplane being way too heavy. I think that there should not be too much of fault on a CEO, as long as proper response has been taken. I have looked, and I haven’t ever seen a case of this emergency. If this event is in game, do tell me, and I will edit this part out.
4). Landing Spoilers and Reverse Thrust
Very simple. For landing aircraft, I’d like to see a reverse thrust with spoilers deploying.