Welcome to Ribbon Ridge Airport.
A group of investors saw a great opportunity buying this airport located about 25 miles southwest of Portland, OR. That is because this grass field airport has many vineyards and wineries around, which can attract many tourists in the upcoming years. A new IATA location code was created for the airport, RRD. With the US$400.000,00 (US$500.000,00 minus the grass runway cost, since in theory the grass runway already exists in real life) that were still available after the airport transaction (Hardest Difficulty), the first arrangements were creating a new GA ramp (with restrooms for the pilots and “passengers”) and a small control tower. Also, it was very important to implement a refueling service which all aircrafts could use if they decided to request. 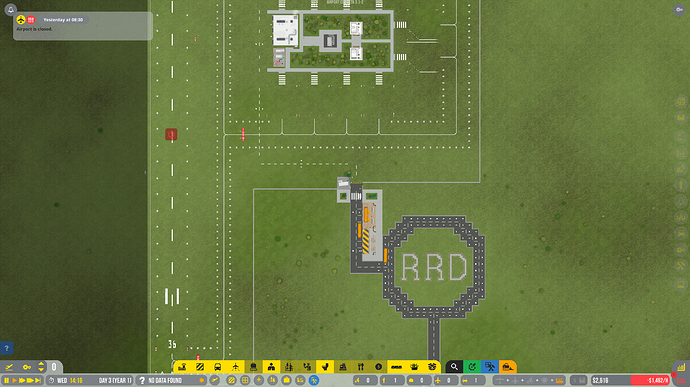 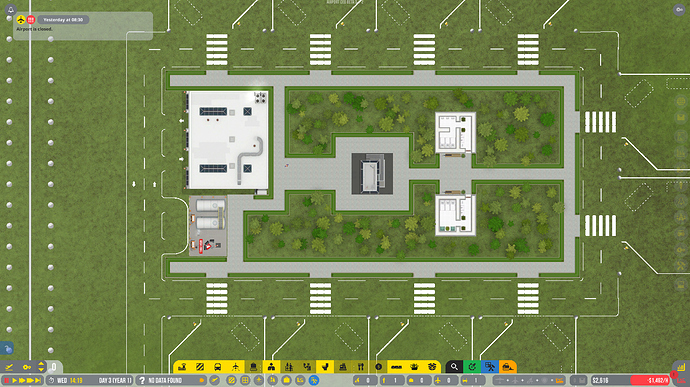 After a couple days of construction, the airport was ready to open. The first flight came from Astoria, a beautiful yellow Piper J3 Cub, that shortly after a quick refuel, decided to buy new wines before heading back home. 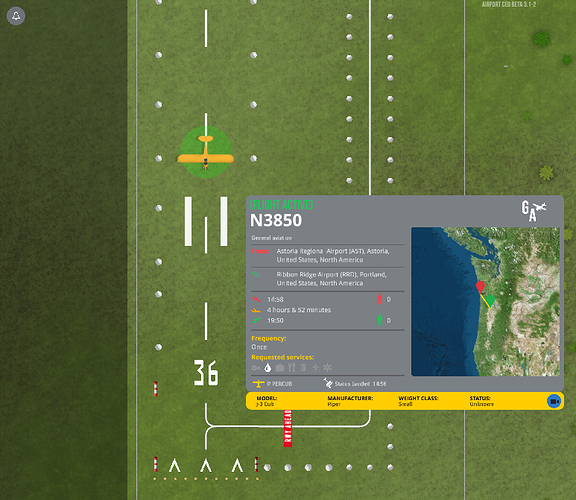 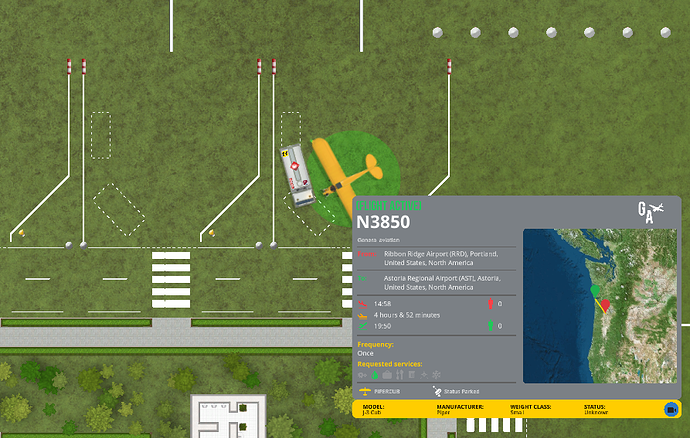 Feel free to leave your comments and suggestions.

As time passes, the popularity of the airport has been increased. In order to keep the airport growing at a good pace, an administration building was constructed at the entrance of the airport, alongside a staff parking lot. Also, new team members were hired (CFO, COO, 2 administrators, 1 janitor and 1 service techninian).

Also, with the increasing revenue, some improvements were made to increase the safety of the aircraft operations. First of all, a new weather station was built to provide the pilots with the hourly METAR (Meteorological Aerodrome Report). Secondily, the grass runway was replaced by a paved runway (Asphalt). Lastly, a new VASIS (Visual Approach Slope Indicator System) was implemented to help pilots to land more precisely. The next goal is to replace all the taxiways with concrete (the administrators already started to research) to increase the GA rating and try to bring more visitors (maybe some local charter companies?). 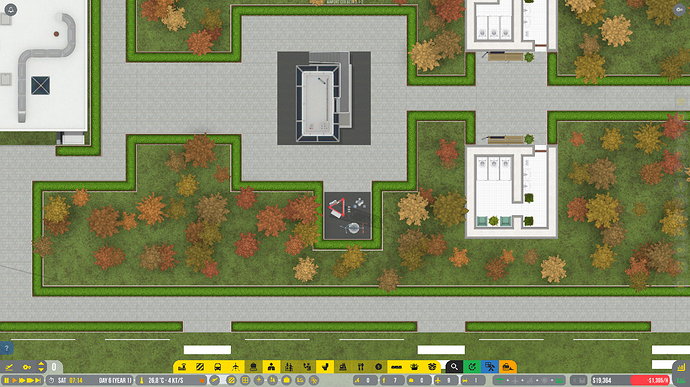 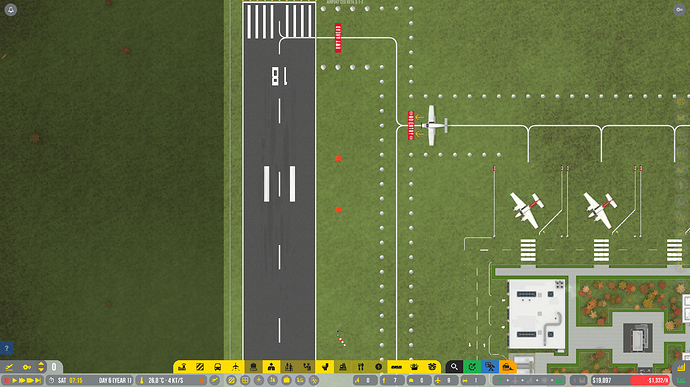 Thanks for the feedback, and hope you keep enjoying the progress.

Astoria, I know of that area. Looks great.

The outside hedging is a nice idea.

One year has passed, and with that, the entire airport has been upgraded with concrete. The GA rating has increased a lot, above 95%, and many new visitors are coming to Ribbon Ridge Airport.

Also, after the recent upgrades, the first jet aircraft has landed at the airport, a magnificient red Cirrus Vision Jet, ressembling the Ferrari colors. 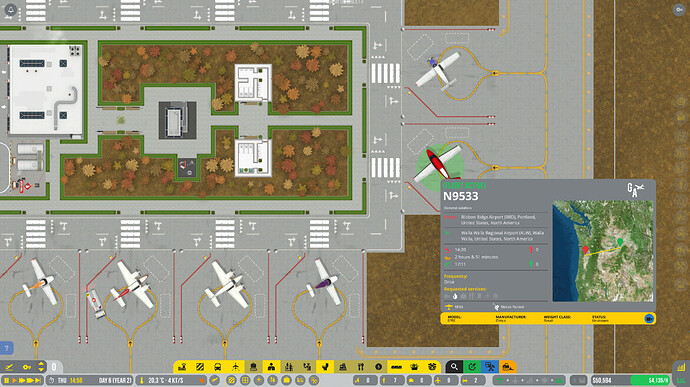 With all these publicity, some local charter companies decided that they want to start flying to Ribbon Ridge Airport. In their opinion, the airport now has a proper passenger demand and is safe enough to takeoff and landing operations. However, they are demanding the construction of a proper passenger terminal to handle all the upcoming flow of people. So, this is the next goal of the CEO, to implement a functional passenger terminal.

Thanks again for all the positive feedback that you are giving.

PS.: I guess it is time to call the tow truck, once there are only 7 people working at the airport, but the staff parking lot is almost full. 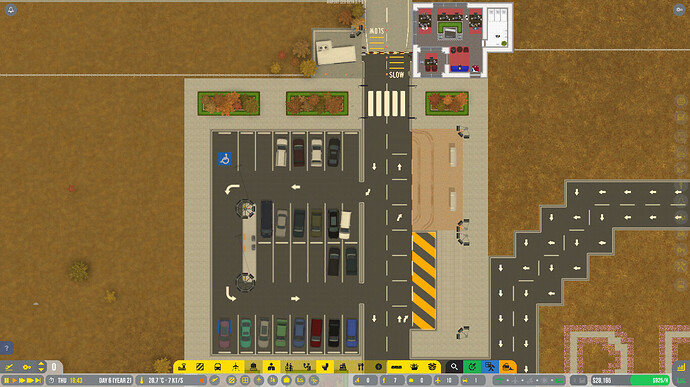 Good morning everyone,
After many years of construction and development, Ribbon Ridge Airport was awarded the status of Municipal Airport. That is mainly because the passenger terminal was finally built. 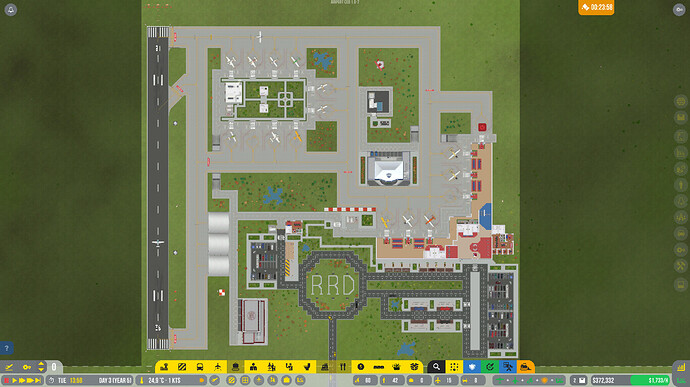 In order to succesfully accomodate all the future car traffic, new roads were constructed, a bus terminal was built, car and taxi drop-off points were implemented, and also, two parking lots are now available, one for short-term stay and one for long-term stay. 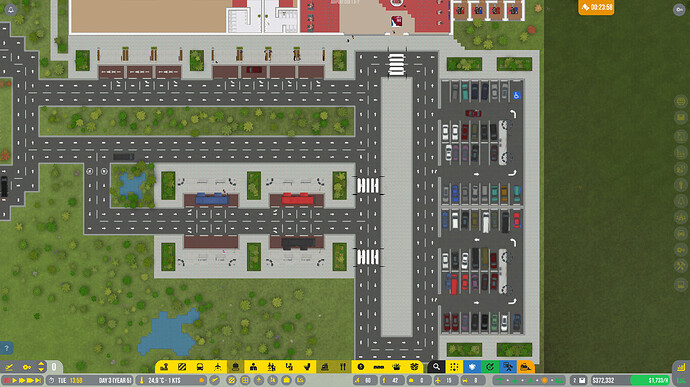 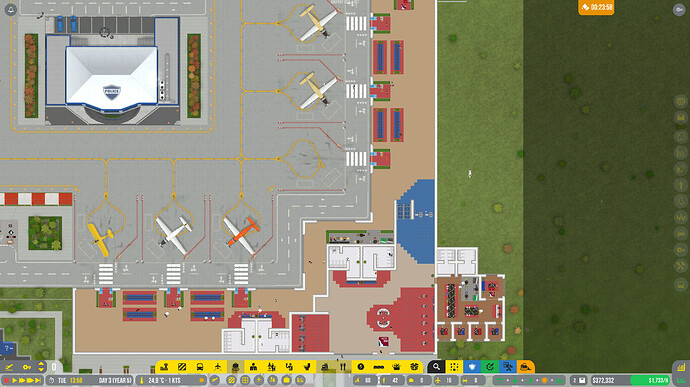 Since the turboprop aircraft requires Jet A, a Jet A depot was built close to the terminal, alongside some blast fences to prevent damage at the fuel tanks. 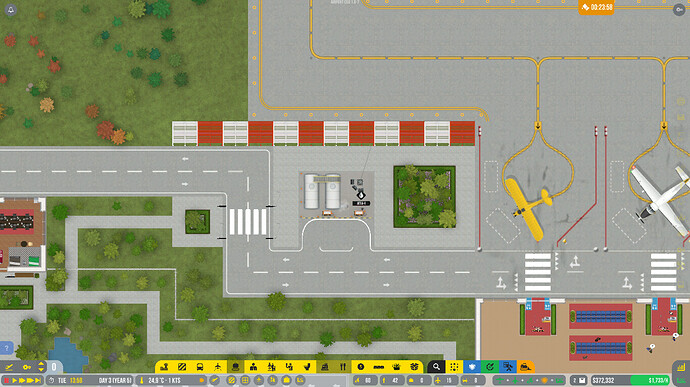 Also, a lot of new employees were hired, and a new admin office was built at the new terminal. The old admin office, however, was refurbished and is now being used by the contractors. 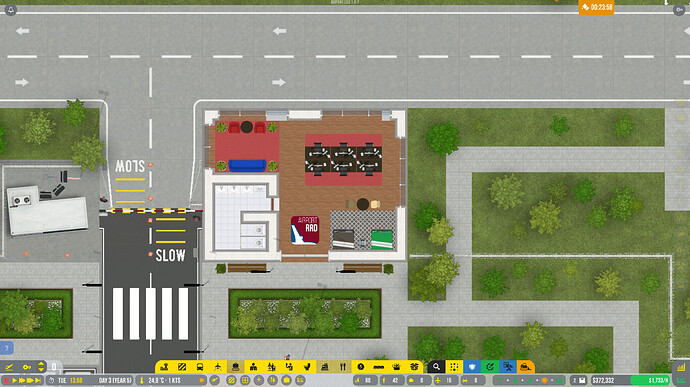 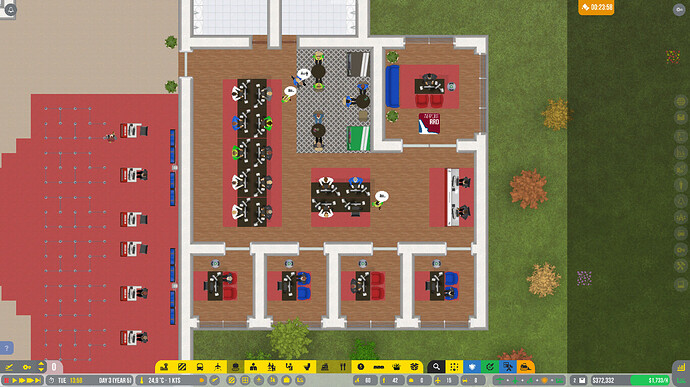 To aid this new level of demand, a new ATC tower was constructed, alongside an improved weather station, which now provides TAF information as well as METAR reports. Also, a radar was constructed to decrease the workload from the air traffic controllers. On the other hand, the old small ATC tower was demolished and the GA ramp was refurbished, and now has a small park inside it. 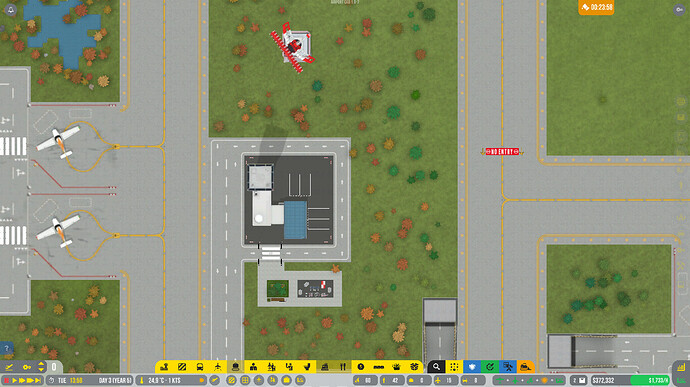 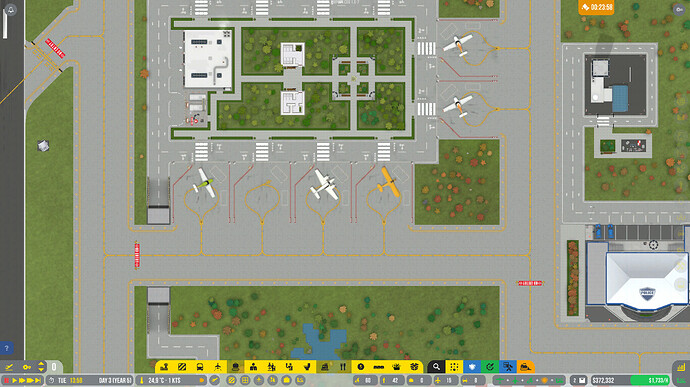 Regarding the safety of the operations, a Localizer was implemented at the end of the runway, alongside with an Approach Lighting System, and also a Glide Slope antenna was constructed close to the touchdown zone on the runway. That means that now the airport has an ILS system for runway 36 and is capable of providind pilots with a safe landing even in low IFR days. Also, two bird strike prevention devices were built close to the runway thresholds. On the security side, on the other hand, a emergency depot was built for fire trucks and ambulances, and a police station was built close to the terminal. Now the airport is fully capable of handling any possible emergency. Finally, some maintenance hangars were constructed to increase the airport efficiency and provide some additional income. 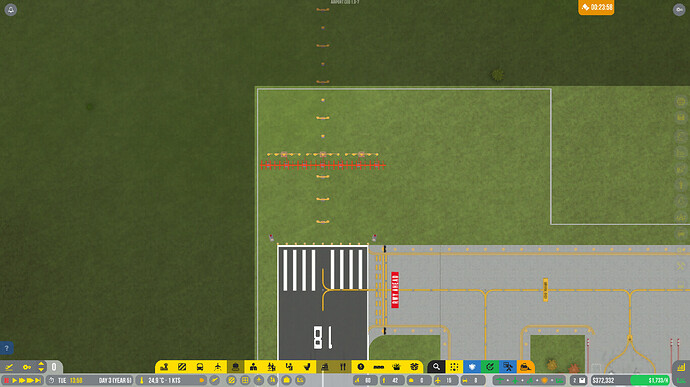 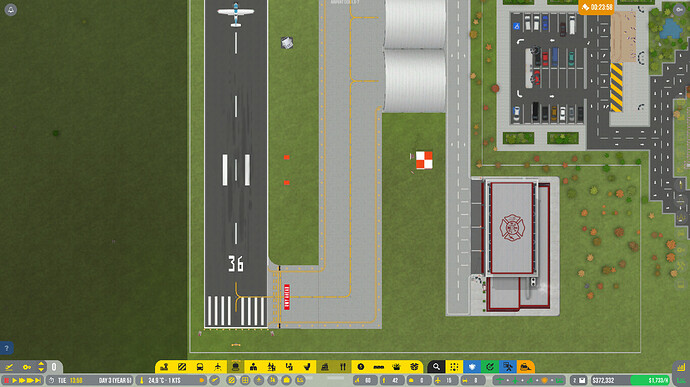 The next goal is to expand the airport boundaries and increase the terminal size, this will allow a medium size runway and provide us to be one step closer towards a Regional Airport.

Hope you all are enjoying, and see you soon.

Hello everyone,
After a couple years of development, Ribbon Ridge Airport was awarded the status of regional airport. The terminal got expanded to accomodate more people, as well as the security room. Three new small gates were introduced, and with that, new airline contracts. Now A7 belongs to Berry Aviation, from Texas, A8 belongs to Southern Airways Express, from Florida, and A9 belongs to Air Choice One, from Missouri. A10 is now the new emergency standby stand. Also, gates B1, B2 and B3 were built, and Delta Connection got B1 and United Express got B2. Gate B3, on the other hand, is the medium size stand used as a standby option for emergencies.
The airport administration bought a new plot of land and was able to construct a medium size runway. However, since the small runway is perpendicular to the medium runway, the old runway is now designated as a southbound departure only runway, to avoid any possible midair collision between aircrafts taking-off or going around from the new runway. Since nobody can land on the old runway, the ILS system was disabled and a new ILS system was implemented on the medium runway. 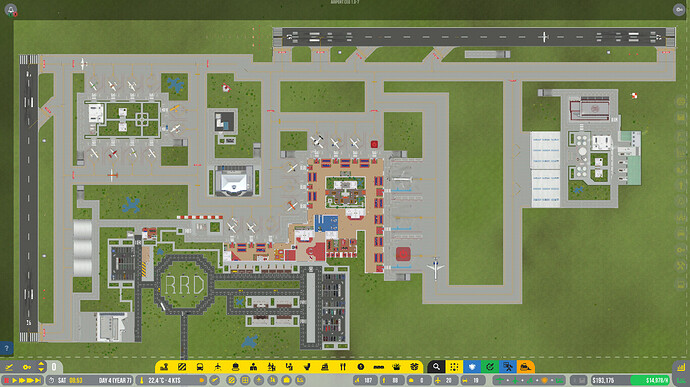 Coupled with that, the old firestation was demolished and was rebuilt close to the new runway, alongside with a better Jet A depot, some medium size maitenance hangars and a waste depot. Where it used to be the old firestation, now is a catering depot. That means that new turnaround services got implemented on the airport. 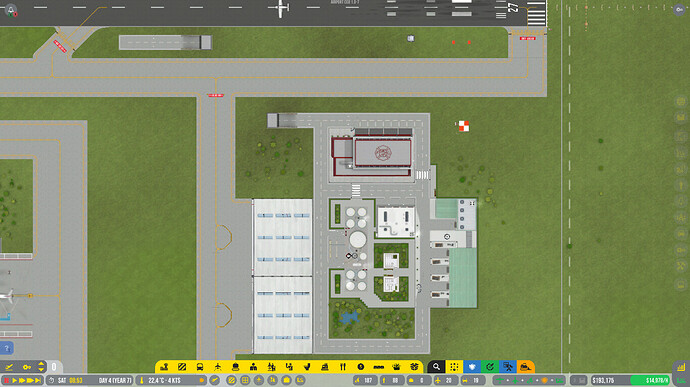 Another update is regarding the admin office, it was further expanded and refurbished, and now it is on the security zone. Also, the executive committee board is now fully completed, as a strategy director and procurement director were hired. 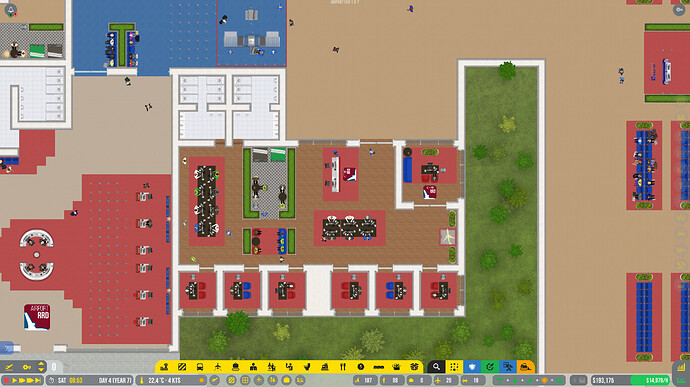 With those hirings, the administration was finally able to research food and shop franchises, and with that, new contracts were made available. Now the airport counts with a KFC and a Billa Store close to gates A1,A2 and A3. Caffé Nero and Relay Store are located upstairs on the non secure zone. And finally, a new state of the art YO! Sushi restaurant, which includes a sushi conveyor belt and a japanese garden if you want to breath some fresh air inside the secure zone, that is located close to all the other gates. 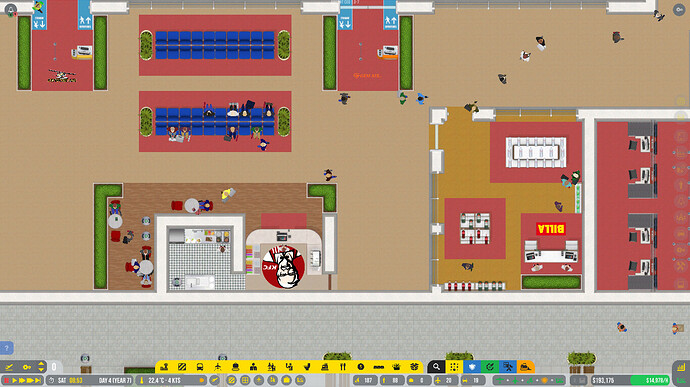 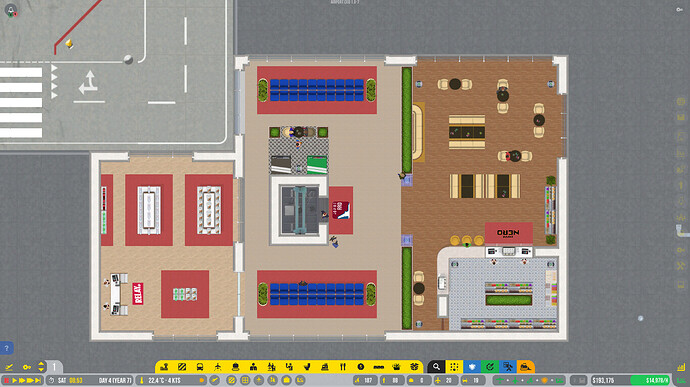 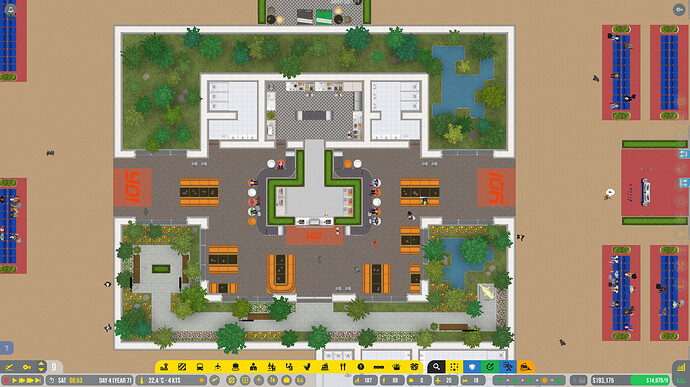 The next goal of the administration is too implement a fully operational and safe conveyor belt system for all the luggage from the passengers, as well as introduce a remote stand service for a few additional stands that are in sight.

Hope you are enjoying the development,

See you all soon.

Another day, another update.
Ribbon Ridge Airport has further expanded its operations, and now has three extra gates. With the addition of the remote stands B4, B5 and B6, new airlines signed contracts with the airport. Alaska Airlines took the old B3 gate. Ohana and Silver Airways, on the other hand, took B4 and B5, once both airlines use ATRs on their fleet, meaning less passengers for the remote stand operations. B6 is now the standby stand for possible emergencies. 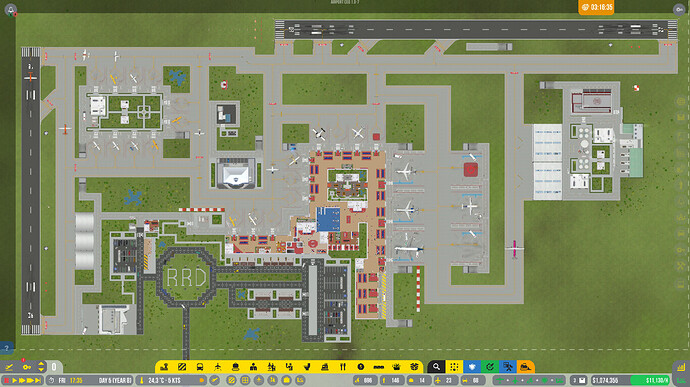 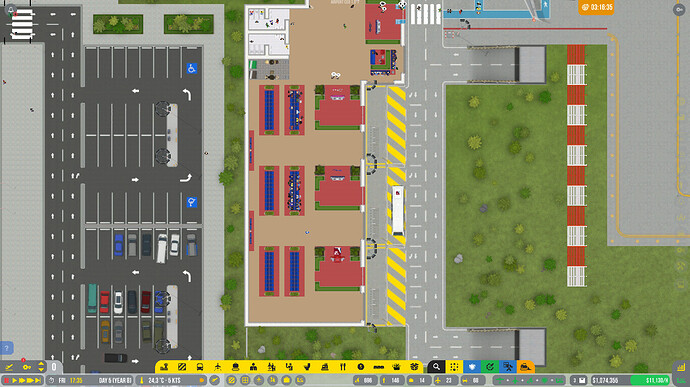 Besides that, the check in desks moved downstairs, allowing more space for another security checkpoint. 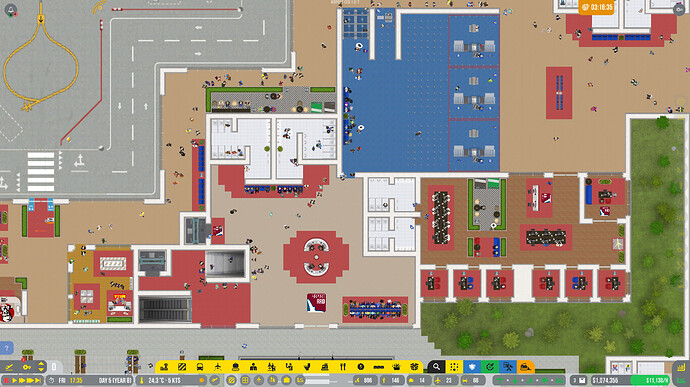 Finally, the airport now counts with a brand new conveyor belt system, allowing a safer and more eficient luggage management. Also, with the addition of automation, the passengers have the option to use the automated check-in and baggage drop, or use the convetional check-in desks with airport personel.
After they leave their luggage on the baggage drop, it goes through a security zone where only employees are authorized. In this area, a staff room for ramp agents was built. 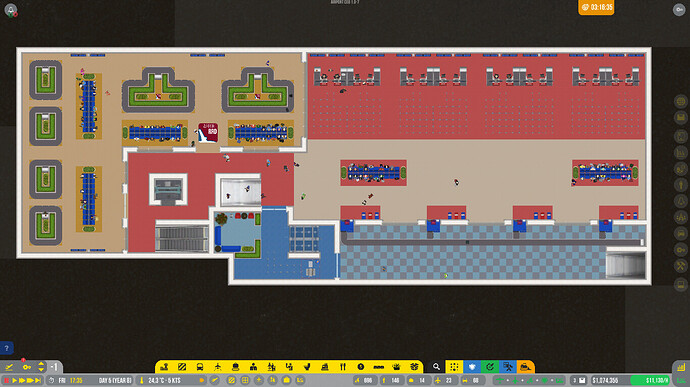 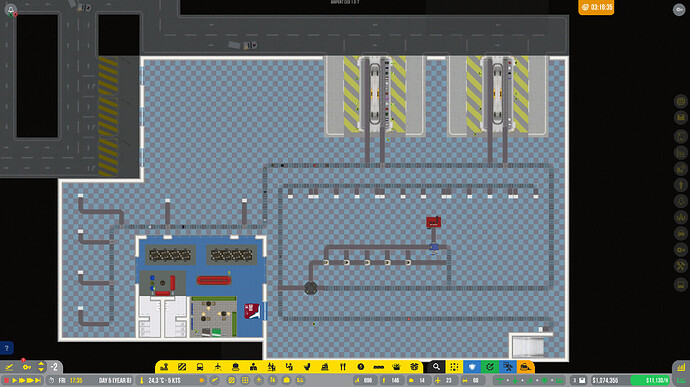 The airport investors are very happy with the results, specially regarding the profits. But the work can’t stop. The next goal of the administration is to make their first step towards a International Airport, but that means that a new car/bus traffic infrastructure needs to be build, since larger aircrafts equals to more passengers, and the old infrastructure is still good for the amount of passengers that we are currently managing, but is very close to its limits.

See you all next time.