Well I got a problem with ramp agents. They are able to go to the baggage hub but not to the acually stand even if I have a walkpath from baggage claim to the stand. I even got one from the airport over there. Dosent work either, I dont know if this is a glicht or a bug or just me being stupid and forgetting something.

It is a known and strange bug. I also currently have it.

Reload save and they fix themselves.

Tested dont work quite for me…

I did the same it didn’t work for me but then I put a fence around saved then reloaded and it work they went to the stand.

I get the message they can’t reach it,but then seconds later he seems to be walking right on the spot. Like it’s complaining to fast?

Is the issue you guys are talking about this, or something else? I can’t get this to resolve either. 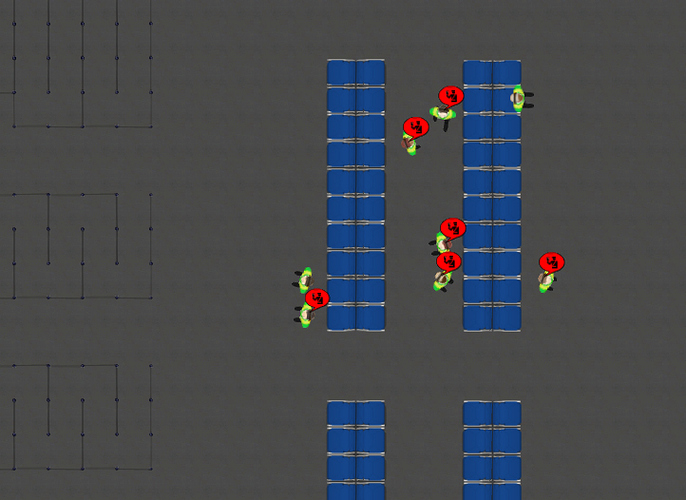 Well that’s the epitome of unintuitive. Hope they fix these issues.

It’s not really a bug - but I agree it’s not something you’d think about.

Never said it was a bug, simply unintuitive.

There are a lot of issues like these however, issues that aren’t bugs but are simply abysmal UI or game-play mechanics of a rather poorly fleshed out system. I understand its EA and all, but these systems have been in the game for excess of whatever amount of time in its two+ year dev cycle. It screams of an inexperienced team of people that implements something that sounds and looks good to them because they designed it, but would never pass QA on the PTC side of the house.

As someone that works in the industry (GFX artist) I can only hope they receive help from someone somewhere, else I fear they’ll continue down the path they’re on.

I’m not bothered by it - it just needs some explanation, such as a tutorial, or when you get an error, a message telling you what you’ve done wrong.

They are an inexperienced team, I don’t think they’ve ever claimed to to be anything other than that. They are doing this in addition to their full time jobs you realise?

I mean, I agree with you, but I think with enough community input and money from the EA sales, I’m sure the game will end up getting there. Despite being inexperienced they are fully committed to the title and more importantly, the community of people that support it.

I hope they succeed, I do. I’ve poured a lot of hours into it thus far. Granted, most of it was spent starting, building, and then restarting an airport and a lot of trail and error due to the lack of documentation and or easily recognizable UI components and what they do, but its still better than whats out there now even in its initial release.

My only concern is tunnel-vision. It’s an aspect that all too often consumes indie and professional developers alike. The only difference is that major studios and publishers have PM’s or Project Managers. The sole purpose of these people is to ensure that the designers stay on target and avoid superfluous additions and the tendency to divagate during the development process. Apoapsis doesn’t have one.

quess I have to go without baggage for now then

Yeah that’s a fair enough concern. I think the community will help keep a lot of the issues related to playability, intuition and UI in check, especially once guides etc. start coming out. That said I don’t think most of the additions they’ve made are superfluous, they’re just as you said, a little bit unintuitive in their application, but I’m confident that they’ll streamline that over the coming weeks

I have the same concerns with tunnel vision, but they did realise their issues and got a testing team in at the last minute (and delayed the game a month) which helped remove some of the common, major bugs…