Questions about the GA servicing

I have some questions about the GA servicing.
So in the second gameplay video, we can see that GA land at airports for refueling. If you don’t remember it I’ll show a image for you: 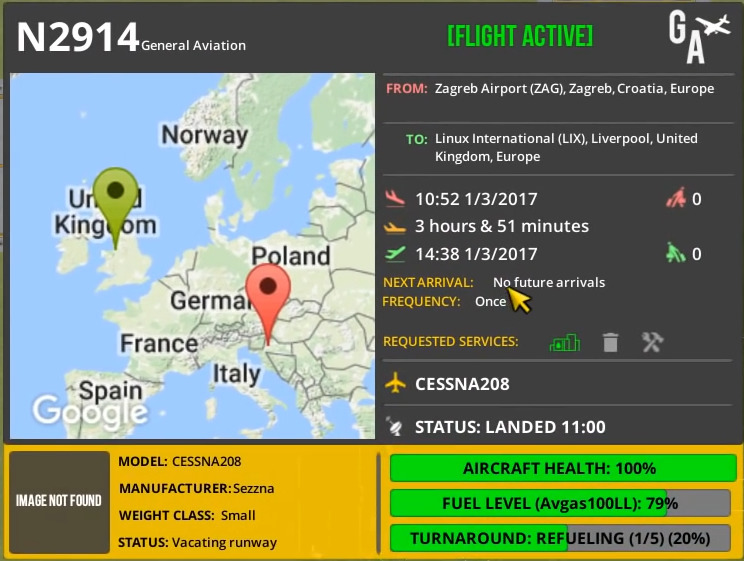 The second icon looks like a trash can to me.

So I think it could be for cleaning and resupplying the plane with foods and so on. So thats more likely to be used for commercial flight.

But that’s only my guess, nothing that is verified.

I think it relates to damage or wear and tear to systems, surfaces, interior cabin wear and tear, broken systems etc. Probably what prompts the aircraft to request maintenance which I suspect is the third icon in the fuel request row.

Yes, it clearly is about the aircraft health, but how do we repair the aircraft?
Do they go to an hangar?

The second button looks more like a trash bin(although, lets be honest, an airplane wont just land to get rid of its trash) and lets be honest,atm,planes require ATC only for Landing/Taking off ,and it wouldnt even make sense to add a useless sign which can only flash like 1/2 times (Because, at the moment we didn`t see the button flash while it was pushed back or while doing any other action)

I think the second symbol looks like a bin/trash can; on that basis I’d guess it refers to needing a cleaning service.

@Popalexcristian there are non-ATC covered airfields around the world. People communicate each other.

There certainly are, I fly at one. Here in New Zealand we have different types of airspace for uncontrolled airspace. The airport I fly out of is in what we call a MBZ (Mandatory Broadcast Zone) and that means that we have to make a radio call at least every 5mins say where we are and what we’re doing. There are other airspaces like CFZ (Common frequency zone) so you don’t have to make as frequent and don’t have to say as much info as in MBZ’s

@Ben
@EG0611
How did you reach the conclusion “that I didnt know the fact that lots of airports dont have ATCs.”

I just sayed that if the second button would be representing an ATC, it would be let`s be honest, a waste of time , since the button would only flash like 2 times(While landing or taking off)

Wouldn’t it be for catering? Not that it looks like it, but it’s important and there seems to be nothing that indicates catering service requested.

I wasn’t meaning it like that, I know most people on here should know that. I was just giving some more info about the uncontrolled airports/airspace here in NZ